Know thy Contracts, and the Liability Accompanying Them

‘No man is an island.’ Today, the interconnectivity of business can drive opportunity, but those same interactions can significantly affect us and our businesses.

Today’s marine businesses have to manage and prepare for the actions of “the other guy” as much as they have to manage their own operations. While businesses often ask their customers, tenants and subcontractors to carry insurance, they often do not carefully delve into insurance specifics to assure that gaps in insurance coverage don’t exist, that limits are adequate, or that they have the right coverage for their operations.

Unforeseen Liability Issues
To explain some unforeseen liability issues that may occur, let’s create a hypothetical risk scenario about a marina owner named Charlie Seashell, who was born and raised around the water and was as salty as a clam. Charlie ran the Seashores Marina and over the years he built quite an operation and a strong reputation to go with it. The marina, like most businesses, catered to their customers, and in this case that was the recreational boat owner. To provide their customers with the best of marina experiences, Seashores Marina sub-let out a 2,000 sq. ft. building to a four star restaurant called Barnacle Bills, and contracted out their boat fueling operations and their boat repair operations. Boat owners who rent slips at Seashores could entertain friends, fuel up for a fishing trip and have their boat maintenance handled right on site.
Like most marina operators, Charlie required his tenants to provide him with Certificates of Insurance which name the marina as an Additional Insured. What’s important to note about Certificate of Insurance is that they just prove that the business has insurance coverage at the time that they handed over the certificate. There are typically no further alerts or notifications if a tenant revises coverage or a policy is terminated for any reason. Charlie, however, trusted his tenants and did not think twice about it after the fact.
One day, a restaurant patron slipped and fell in the parking lot outside Barnacle Bills restaurant. The patron filed a claim against the restaurant for personal injury, and while they were at it, included Seashell Shores in the claim as well. The restaurant’s insurer defended both the restaurant and the marina, but after the claim was settled, the insurance company subrogated the claim against the marina that was responsible for keeping the parking lot in good repair.  At the end of the day, the marina’s insurance policy was hit with a loss, and Charlie learned a lesson.
While not a tremendously big loss, it was a loss nonetheless, so being the good businessman that Charlie is, he revised is contract with his tenants to assure that they would name the marina as an Additional Insured with a Waiver of Subrogation, and that the marina would be provided with a Notice of Cancellation (NOC) should any of their insurances ever be cancelled or substantially changed.

Problem Solved?
Either way, Charlie felt good about his new contract.  Accidents happen but now, he felt more protected with his current contract and with the requirements he placed on his restaurant tenant. And Charlie’s business, and his tenants’ operations, continued to grow. Barnacle Bill’s obtained a liquor license and that boosted its popularity, not only among the Seashore’s boating community but among local community residents as well. Charlie also leased space to some industrious young entrepreneurs who opened a jet-ski rental business on one of the finger piers at the marina.
Then on one fine sunny day as Charlie is standing in front of the marina office he noticed a restaurant patron wobble out of the Barnacle Bills, pop a breath mint, and wander over to the Jet Ski rental pier. Fifteen minutes later, he sees the same patron sitting on a jet ski waving thanking the fuel attendant, and then pulls away from the fuel dock, nozzle and all. The resulting accident sends 500 gallons of gasoline into the water, ignites the fuel dock, and sends the jet skier head first into the adjoining dock.  Charlie goes into immediately into action, deploying firefighting equipment, oil containment booms, and calling 911. Within a couple of hours the incident is well under control, and Charlie with the knowledge that his marina is now safe, and that the solid contract he has with his tenants which includes a full indemnity provision, will provide the marina with the protections needed. Or, did it?
Turns out, however, in the excitement of obtaining a liquor license, Barnacle Bill’s overlooked the fact that they might need Liquor Liability coverage to go along with it. In fact, like many Commercial General Liability (CGL) policies, Barnacle Bill’s CGL policy included Liquor Liability exclusion. Therefore, a smart move on their part would be to purchase a stand–alone Liquor Liability policy. A Liquor Liability policy covers the legal liability imposed on a business that sells, distributes or serves alcoholic beverages. A good deal of alcohol-related liability claims filed against bars, taverns, and restaurants are a result of liquor-induced fights or altercations, or watercraft accidents, in this case.
That wasn’t the only gaping hole in Charlie’s tenant’s coverage.  The fledgling Jet Ski rental company had CGL policy but unbeknownst to Charlie, its policy included an Aircraft, Auto and Watercraft exclusion, leaving them with no insurance coverage to cover the patron’s claim.
And wait, let’s not forget Charlie’s fueling station subcontractor who was equipped with a Marine General Liability (MGL) policy to cover his operations by the water. What he also had was an absolute pollution exclusion – therefore, he did not have financial protection to cover the cost of the fuel spill cleanup.

Lessons Learned
Charlie learned a lot of lessons that day, and the marina’s  insurance coverage took a hit again as he was held liable for his tenant’s gaps in insurance coverage. Now Charlie is walking on egg shells until his next insurance renewal, as he knows that his continuing marina business is dependent on finding proper and affordable insurance coverage.
Like Charlie, marine business owners need to review questionable contract terms with their insurance companies. Not only do they have to know they have the proper insurance to cover their operations in and out of the water, they also need to identify what coverage(s) their tenants and contractors have and understand how the contracts that they have with each of these individual businesses may be able to impose some degree of financial responsibility back on the marina. And, those caveats extend to all sorts of marine businesses.

(As published in the March 2014 edition of Marine News - www.marinelink.com) 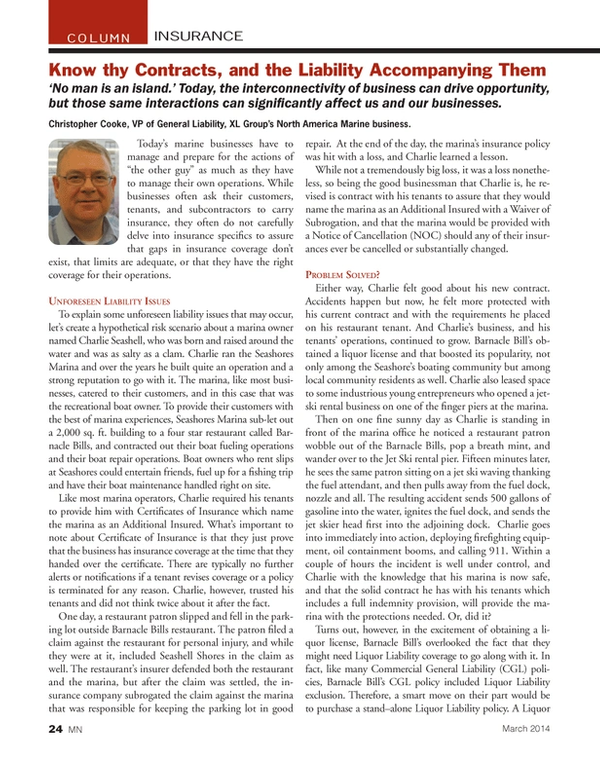 Read Know thy Contracts, and the Liability Accompanying Them in Pdf, Flash or Html5 edition of March 2014 Marine News

Other stories from March 2014 issue