The ABCs of EALs for the EPA’s VGP

When the Environmental Protection Agency (EPA) issued the new Vessel General Permit (VGP) in December 2013, lubricant and fluid manufacturers were prepared to give vessel owners a number of environmentally acceptable lubricants (EAL) to work with. EAL usage is now essentially required for any application on vessels where incidental lubricant discharge could occur in the marine environment. Those applications include stern tubes, thrusters, stabilizers, CPP propellers, and wire rope and mechanical equipment immersed in water during normal operation.
Today, with so many EAL choices available, vessel owner/operators and equipment manufacturers are looking to understand the performance characteristics of these different lubricants. Other than water lubricated applications, EALs attain their environmental qualities by using either an ester oil, a polyalkylene glycol (PAG) oil, or a combination of ester and synthetic mineral oil (PAO) as the base oil of the lubricant. Considering that the vast majority of EALs that have been approved by seal system manufacturers contain ester oils, it is likely that most vessels will use an ester based EAL. It is important for users to have an accurate understanding of ester oil performance characteristics to assist in their selection of EALs and to ensure they receive the most benefit from their investment.

Evaluating Environmentally Acceptable Ester-based Lubricants
As a mainstay of marine lubrication, ester based oils and greases continue to offer value and versatility in a majority of situations. As a class, ester-based oils exhibit excellent environmentally-friendly properties in terms of biodegradation, non-bioaccumulation and minimal toxicity. Concern over lubricant effects in these three environmental areas was the basis for issuing the changes to the oil–to-sea interface section of the VGP, which specifically targets mineral oil as unacceptable.
Esters used in lubricant formulations fall into one of two categories: either naturally produced triglycerides from vegetable or animal sources, or synthesized esters developed by combining acids and alcohols in a manufacturing process. Triglyceride esters have found acceptance for use in hydraulic oils and as a base for biodegradable greases. However for marine use, where the influence of water and operational temperatures can affect the lubricant’s performance, synthetic esters generally perform better.
Triglyceride esters do have a high viscosity index to minimize thinning at high temperatures, and they exhibit high lubricity. Furthermore, reaction with paints and varnishes is not a problem. However, they exhibit poor temperature stability and poor flow behavior at cold temperatures. At high temperatures, oxidation readily occurs, requiring more frequent oil changes. They also exhibit poor hydrolytic stability, readily breaking down in water to form carboxylic acid and other acids that can damage machinery and seals. It is these negative traits of triglyceride esters that lead to the often repeated claim that ester based products have poor hydrolytic stability.
Synthetic ester oils, on the other hand, can be used with a wider range of applications, because their properties can be tailored for specific performance conditions. They handle a wide range of temperatures and exhibit high viscosity, lubricity, corrosion protection and oxidative stability — the latter feature contributing to longer lubricant life, an advantage in hydraulic fluids, and stern tube and-thruster oils where vegetable or mineral oil based lubricants need to be changed more frequently.

Hydrolysis Resistance in Ester-oil Chemistry
To answer the question, “What about the hydrolysis of ester oils?” it helps to understand the basics of ester chemistry. Synthetic ester oils are derived from an inorganic acid or an organic acid in reaction with an alcohol. The esterfication reaction produces the ester, plus water. The reverse reaction, called hydrolysis, consumes water while producing acid and alcohol. Like all chemical reactions, the process depends on temperature.
Although all esters can be hydrolyzed, it does not mean all esters have poor hydrolytic stability. Again, the difference is in the formula. When using vegetable resources, the esters produced have simple, linear molecular shapes with double carbon-hydrogen bonds. They are referred to as “unsaturated esters,” because the molecule is not “fully saturated” with hydrogen atoms. These structures are relatively weak, and in the presence of water and heat, poor hydrolytic stability can be expected.
But when saturated esters with branched acids -- known as polyolesters -- are utilized, hydrolytic stability is improved. In fact, for these complex polyolester molecule shapes (technically known as sterically hindered esters), hydrolytic stability is very good. Field experience with saturated synthetic polyolesters with branched acids show that even when mixed in 300 to 500 ppm water, acid content does not increase over years.
Ultimately, the speed of hydrolysis reactions is influenced by several factors:

Of these factors, ensuring a low percentage of water in the oil is the ultimate deterrent against hydrolysis. For thrusters, the amount of free water in gear oil should not exceed 200-1000 ppm depending on manufacturer specifications. Typically, a maximum of 200-300 ppm is recommended. In stern tube oil, the water content should generally not exceed five percent. By maintaining seal integrity and monitoring the condition of the oil, ester oils used in stern tubes should last for years.
In addition, due to the low water percentage recommended in these applications, using an emulsifier to disperse the water in oil will increase the tendency towards hydrolysis. Oils without emulsifiers can have free water removed with conventional oil filters containing water separators. Oil with an emulsifier will yield a stable emulsion; however, water cannot be easily removed. Using an emulsifier in stern tube oil is a viable emergency measure that will require prompt oil replacement. 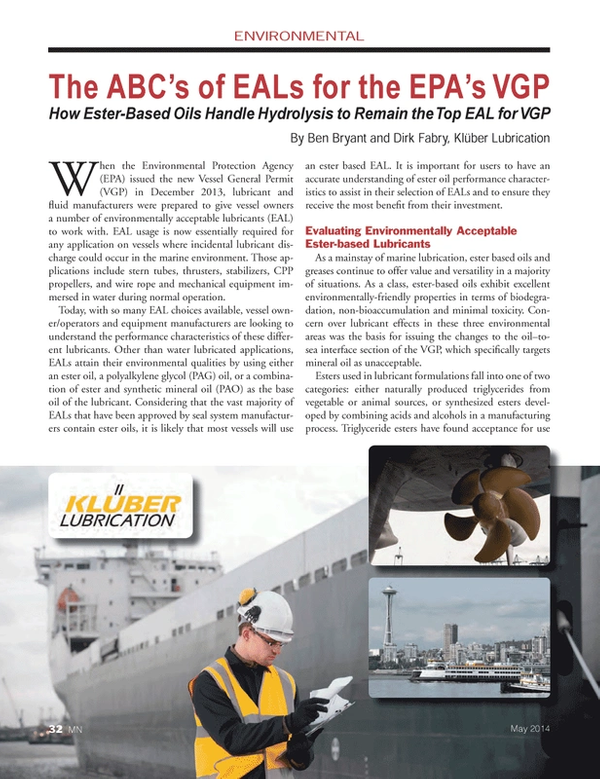 Read The ABCs of EALs for the EPA’s VGP in Pdf, Flash or Html5 edition of May 2014 Marine News