Arctic Energy Exploration: Not If, But When?

Energy exploration in the Arctic has been a hot topic in recent years and shows no signs of cooling down anytime soon. However, the United States appears stuck in neutral on the topic and those opposed to oil and natural gas exploration anywhere have used the Federal inaction to advance their arguments against any development.
Whether the rest of the world’s Arctic regions will be explored is no longer a question of if, but when.  While U.S. officials have stood on the edge contemplating new regulations, new requirements and litigation setbacks, other countries have moved ahead. Russia, Canada and Norway continued to advance their exploration programs in 2013, and 2014 will see more. U.S. Federal officials have repeatedly stated their desire to establish an Arctic exploration program that will set world wide standards. However, we cannot lead when we are not in the game. Currently, the U.S. is sidelined by its own apparent hesitancy.
There isn’t much disagreement that the Arctic is a unique ecosystem that provides a great array of natural resources and a vital subsistence livelihood to its residents. However, the Arctic also holds the great potential of large natural gas and oil resources. Producing those resources would provide local jobs and economic benefits, and also add a vital energy supply line to the rest of the world.
Those who oppose oil and natural gas exploration simply state that Arctic development cannot take place safely. Fortunately, the oil and gas industry operating in Arctic waters outside the United States is showing that is not the case. The industry has a duty and obligation to minimize risk, and is full of ‘can-do’ individuals dedicated to seeing that exploration and development is done with safe operations and environmental protection as top priorities.
If the United States wants to be a leader in Arctic development, the federal government should make 2014 a year of action and achievement rather than just talk. The Department of the Interior needs to complete their Arctic regulations and release them for public comment, so that the process may be completed. The Administration needs to work closely with interested parties, including the oil and gas industry and Native groups, to move forward with a program that will provide local benefits, such as revenue sharing, and broader national benefits, such as increased energy security and less reliance on foreign oil.
The U.S. Energy Information Administration projects that the world will use oil and natural gas as a primary source of energy for generations to come. Nontraditional fuels will become a bigger share of that energy portfolio, but are still expected to supply only about 15 percent of the world’s energy supply.
So, when will U.S. energy interests in the Arctic by explored?  Now is the time for our policymakers to decide whether the United States will continue to sit on the bench in the Arctic or actually be allowed in the game in the near future. 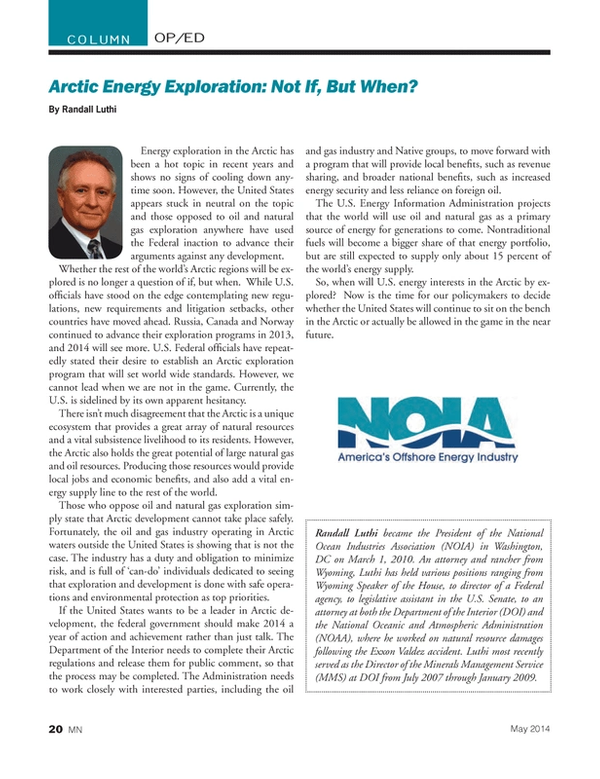 Read Arctic Energy Exploration: Not If, But When? in Pdf, Flash or Html5 edition of May 2014 Marine News