Streamlined Service for the Offshore Sector

If Signal Ship Repair’s (SSR) primary business can generically be described simply as ship repair and conversion, then it can also be said that its practice of ‘high blocking’ to facilitate faster, and more efficient in-house Z drive repairs is its signature service. Utilizing a simple but highly effective shipyard technique, SSR has taken a routine practice originally used to facilitate naval ship drydockings, and turned it into a signature service that helps offshore clients with drop down thrusters, z-drives, pods and keel coolers get repairs done rapidly. In a business where day rates can soar to $50,000 or more, getting them back to work in days, instead of weeks, can make all the difference.
A MarineNews visit to SSR’s mobile shipyard in April brought the valuable, if not unique service into full perspective for the offshore markets that the Gulf Coast yard serves. Located in downtown Mobile, Alabama, the SSR facility of 53 acres and 4,400 feet of waterfront operates one Panamax and one 4,500 ton drydock. SSR offers mooring capability for vessels 1,000 feet (305 meters) in length. Signal International Inc., SSR’s parent, is a Gulf of Mexico provider of marine and fabrication services which include a full service suite of new construction, heavy fabrication, offshore drilling rig and ship overhaul, repair, upgrade and conversion.
Signal International, LLC was organized in 2002 as a limited liability company after acquiring the offshore division of Friede Goldman Halter. Signal International, Inc. was incorporated in 2007 and began operations of offshore fabrication with shipyards in Texas and Mississippi. The Pascagoula location(s) – consisting of an East and West Yard – specializes in floating oil rig repair. In 2010, the company entered into the US Gulf Coast ship repair business with the asset acquisition of Bender Shipbuilding and Repair in Mobile, Alabama. It is now Signal Ship Repair. With a family of three yards strategically located along the Gulf of Mexico in Alabama, Mississippi and Texas, Signal is poised to ramp up its services to an equally vibrant offshore oil and gas industry and its support sector.

The ABC’s of High Blocking
Signal Ship Repair (SSR) has the ability to dry dock up to 600 foot vessels draughting over 24 feet of water on 12 foot blocks. While the standard blocking is six feet, the high blocking scenario gives SSR the ability to repair drop down thrusters in the fully down position without cutting a hole in the dry dock floor. In this way, they are also able to rig and remove Z-drive thrusters much faster should they require removal to the shop for rebuilding. Beyond this, the practice greatly facilitates ease of bottom repairs and coating. In a nutshell, the high blocking scenario has opened a new niche market for Signal Ship Repair.  With the increase in the number of construction and offshore support vessels working in the GOM, it has given Signal the opportunity to perform eight quick turnaround high block dry dockings in the past 12 months.  SSR Vice President of Sales & Marketing, Joe Mayhall, told MarineNews, “The high block dockings fill short term availabilities in our dry dock schedule. The high blocking along with in-house Z drive repair capabilities turns our client’s repair around rapidly, getting them back to work in just days.”
High blocking, as it turns out, has its origins in SSR’s early Navy work. The procedure came out of the need to block Navy frigates with a steep dead rise. The frigate beams are made out of steel on a triangular setting and set at the turn of the bilge for hull stability.  Depending on overall height needed, steel beams are set below and wood blocks on top of the structure.  On centerline there are two stacked four foot blocking arrangements with elevated beams between and wood blocking atop of the concrete. This is dependent upon required height.
Mayhall explains further, “I don’t know that Signal Ship Repair pioneered high blocking, but certainly, we take advantage of it. Only later did we use this method for dry docking commercial vessels that needed the high blocking (up to 12 feet/3m) for drop down thruster and Z-drive repair.” And, in the past two years alone, SSR has performed the high blocking technique for as many as 18 different vessels. Operators taking advantage of SSR’s expedited services include Transocean, Hornbeck Offshore, Olympic Shipping, Eidesvik, Dutra Construction, Express Marine, Signet and Seabulk Towing; just to name a few.
SSR fine-tuned the practice way back in 2010. Mayhall says, “We did a major maintenance and repair upgrade to our Panamax Dry Dock 1, taking it out of service for 90 days. During that period we deep dredged under the dry dock to accommodate the drillship DEEPWATER NAVIGATOR for an upcoming dry dock period. The docking requirement was 12 foot blocking. The 550 foot drillship would draw 30 feet of water when coming into the dry dock. The high blocking was necessary to remove and repair the 12 drop down and fixed Z-drives and thrusters as well as paint and underwater steel repair.

Time & Money = Oil & Gas
Like everything else in the maritime industry, minimal out of service time is paramount in the oilfield.  Every day saved on a docking evolution can mean huge money to operators. Steven Lee, Equipment Manager at The Dutra Group said in April, “We have taken advantage of Signal’s high blocking capabilities three times in the past twelve months. On the dredge Columbia it was extremely helpful with hopper door repairs to have height for removals. On our dump scow CK7 being blocked at seven feet made it so much more efficient working on the seals on the split hopper. We believe that Signal Ship Repair was able to stay on schedule and reduce overall time in the shipyard being able to work the equipment with the high blocking system.”
Joe Mayhall explains the practice even further, “Not having to cut holes in the dry dock floor to remove Z-drives is time and money saved. Just being able to maneuver under the vessel without being bent over, worse yet, on your knees is an advantage to the operator and to the shipyard. Efficiencies increase and less man-hours are needed to perform the work, rigging time is minimized, saving money and time on the clock. The practice gives us the ability to work the equipment in place and multi-task on the vessel, as we do.”
In April, SSR put a vessel on last week on eight foot blocks that provided the ability to work keel coolers, a drop down thruster forward and replace seals on the stern while completing minor steel work. Off and on, the work took just four days. Additionally, there were two vessels on the dry dock simultaneously. Upon undocking; one vessel went back to the GoM oilfield, and the other went to an overseas contract. Involving both 135 foot LOA tug and another multi-service (370 foot LOA) vessel, the double docking allowed two separate owners to have their vessels repaired and back to work with minimal downtime. Mayhall adds, “The slight increased price of the blocking effort pays dividends in way of less time in the shipyard and a better overall experience with the repair evolution.”

Specialized Service for Offshore Clients
SSR’s turnkey Deep Draft Rig Solutions also afford One-Stop-Shop Accountability, thruster work done by an experienced and specialized team (including the Thruster OEM), safe and easy-access worksites adjacent to the SSR shipyard and provides access to a Well equipped deepwater rig yard with dedicated shop for thruster work and space for storage of owner furnished equipment. In addition, SSR touts its easy access to the key Gulf of Mexico locations for its offshore oil & gas support clients.
Well into 2014, SSR, like many other Gulf Coast yards, remains busy and its backlog promises more of the same for the immediate future. In March they announced their intention to add 150 employees at its Mobile, AL location to accommodate another high profile drydocking operation; this time for a 615 foot Military Sealift Command vessel. Versatility for a wide range of vessels, therefore, remains the Hallmark of Signal Ship Repair’s many strengths. The practiced technique of high blocking of special mission oil & gas support vessels is just one of those strengths. Then again, it may well be its most valuable resource for the competitive, red-hot Gulf of Mexico offshore sector. For operators looking for just one more edge when it comes to staying on station for as long as possible, Signal’s got that niche covered.
www.signalint.com 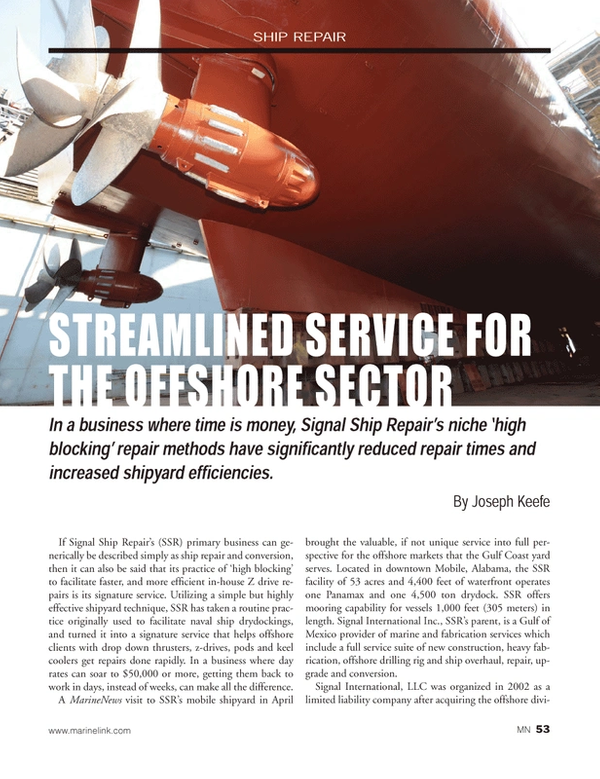 Read Streamlined Service for the Offshore Sector in Pdf, Flash or Html5 edition of May 2014 Marine News