In June, Governor Andrew Cuomo announced the launch of an all-electric dredge tender work boat on the Erie Canal in the Utica area of New York. The project, a partnership with the New York State Energy Research and Development Authority (NYSERDA) and the New York State Department of Transportation (NYSDOT), utilized an electric motor supplied and installed by Elco Motor Yachts, LLC, of Athens, New York. Significantly, the New York State Canal Corporation collaborated with Yorkville-based New West Technologies, LLC, in order to determine how best to transition the State’s work boat fleet to a cleaner propulsion system.
Like any ‘green’ initiative, funding and support has to start from the top. This project was no different. “By partnering with the private sector, New York State is transforming an 86-year old tug boat into a cleaner, greener and more modern zero-emission vehicle,” Governor Cuomo said. “Projects like this demonstrate our commitment to protecting the environment and show how this continued dedication is laying the groundwork for a clean energy economy of tomorrow.” And, depending on the metrics and data that comes out of this effort, the State of NY and its storied canal system could see more of this sort of clean propulsion.

Something Old; Something New
The project made use of a 1928 tug boat, now in service as a dredge tender, buoy removal and other canal workboat missions. Previously running off a 1980s-era diesel engine, the “Tender 4” operates eight hours every day, now running on a battery-powered all-electric powertrain system. As a further cost saver, the tug runs using the same prop as before. Joe Fleming, Chief Engineer at ELCO, told MarineNews, “With the older diesel, there was always a lot of leakage. The electric motor is simpler, quieter, easier to maintain. Operational costs are much less and, of course, no fuel is needed.” Moreover, the all-electric system eliminates exhaust emissions and the potential for fuel spills, while reducing noise. The result: a more environmentally- and economically-sustainable solution.
The Canal Corporation partnered with New West Technologies, LLC (New West) to evaluate and help determine a clean propulsion transition path for its work boat fleet. The initial Phase 1 feasibility study completed through this partnership validated the energy, economic, and environmental benefits of electric propulsion for Canal Corporation’s work boats. Phase 2 includes the ultimate goal of evaluating the tender’s operational and maintenance data to support the goal of transitioning the long-term sustainability of New York’s fleet. New West is now collecting operational data from both the all-electric boat and a standard diesel boat to analyze the real-world performance benefits for the Canal Corporation. Other entities considering the use of all-electric or hybrid-electric marine powertrains are no doubt watching closely from the riverbank, as they do.

Workboat Ready: Electric Power
The electric powertrain was manufactured by Elco Motor Yachts, LLC (Elco), located in Athens, NY. Elco developed the system that tightly adapts two electric motors into a robust powertrain configuration that could be applied to the dredge tender. Particularly impressive with its modular design, this powertrain design allows it to be easily configured for other dredge tender boats with more or less electric motor power and more or less battery capacity, as needed.
Elco electric motors are known for their safe, efficient operation, simplicity, reliability and ease of installation. Elco’s twin EP-10000 motors allow the tender to work silently with zero exhaust emissions and without contributing to water pollution.
Any downside of electric propulsion today will eventually be eclipsed by evolving technology tomorrow, says Elco’s Fleming. For example, in terms of the ‘pound for pound’ energy content of lead acid AGM batteries verses diesel fuel, batteries today are over ten times the weight of diesel for the same amount of energy content. This relates specifically to run time. Fleming adds, “Battery technology and energy storage in general is improving at a rapid rate, and when it equals that of diesel fuel, electric propulsion will overtake diesel power since it is lighter, more reliable, requiring less maintenance.”
In general terms, Elco’s rule of thumb is that the volume/weight of electric propulsion (without batteries for electric propulsion, or fuel tank, plumbing, etc for the diesel) is approximately 30% to 50% lighter and approximately 30% less costly, especially considering the EPA standards for diesel that are coming into play. And, it is here in the empire State that the electric motor makes particular sense, especially given that New York probably has a higher renewable energy content to its power grid than most other states because of hydropower from Niagara Falls and the Erie Canal.
Commercial operators watching from the cheap seats will probably want hard data on how much money the state could save by making the switch to electric power. At this early stage, hard numbers have not yet been gathered, but Elco says that gathering this information is what this project is all about and it will take a year or two to unfold.
For example, the difference in cost between the each power charge and conventional diesel bunkers will be an interesting comparison, when it is all said and done.
And, while typical power generation in New York is arguably cleaner than that produced in other states, the question of whether an electric connection merely moved the carbon ‘burn’ further downstream remains to be answered. Early indicators point to combined savings from reduced energy costs, maintenance costs, environmental impact, and other variables will eventually yield a breakeven ROI in two to three years, after which there are (significant) annual cost savings to be experienced.

Real World Performance, Logistics
Outlets for recharging the boat’s batteries are positioned at key spots on the canal, but the ‘Tender 4’ can also charge from barge or dredge gensets that it is pushing. On board the Tender, batteries are located port and starboard, readily accessible and charging is a convenient event. The workboat consumes about 55kw of energy on average, so the batteries were designed to provide 66kw – a safety factor of 20 percent, just to make sure any and all anticipated energy needs are met. About 10 hours of battery power in one charge – 6 to 8 hours – is achieved utilizing a standard shore connection, single phase 208v – 240v input. That said; in reality, the tug can go and “bunker” at any marina and plug in. Hence, what might seem as a geographically limited workboat is, in reality, anything but.
In the water, an electric engine provides instant response time and full torque immediately. In comparison to a similar powered diesel engine, the electric engine is smaller, lighter, and does the same work. Bollard pull, in this case, is rated at 3,500 pounds. And the old fuel tank? Fully washed and cleaned – it is still on board. The tug can use that as necessary, for ballast purposes.

Elco: Then, and Now
Anything but a newcomer to the green propulsion game, Elco Motor Yachts is a pioneer in electric propulsion with a history that includes introducing the first marine electric motor at the Chicago World’s Fair in 1893, where electric boats shuttled more than one million passengers to and from the Fair. The company was later acquired as a subsidiary of the Electric Boat Company and produced submarine chasers during World War I and PT boats for the U.S. Navy during World War II. After the war, Elco merged with the Electric Boat Company, which decided to focus its operations on government contracts for submarines. In 1987, Elco once again became a privately owned company, and today it provides environmentally friendly electric propulsion systems for recreational and commercial vessels of up to 85 feet.

Today & Tomorrow: the future of electric motors
The electric motor concept is not a ‘one horse’ concept. Beyond being involved in this niche business for the last 121 years, Elco is advancing any number of other applications. These include:

To date, the largest all-electric boat that Elco has repowered is the 66’ launch in Canada, and the largest by power is the New York State Canal Corporation tug boat (two tandem EP-10000 systems with a bollard pull of approximately 3,500 lbs). Elco’s Joe Fleming adds, “We are quoting vessels in the 100’ range at the present time and expect orders for these sizes in the near future.” Today, the NYS tug boat works daily on the Erie Canal with an electric propulsion system and serves the same purpose as a harbor tug pushing and pulling larger ships. And Fleming adds, “Today, we can repower tugs of up to 50’ and 4,000 lbs. bollard.”
Back in Albany, NY Canal Corporation Director Brian Stratton backs the project enthusiastically. “With the help of our partners in the private sector, we will continue to find innovative ways of adapting our century-old infrastructure to provide cleaner and more efficient service to our customers and neighbors along New York’s Canal corridor.”
Unlike West Coast, so-called ‘hybrid’ tugs – which typically motor to their assignments in electric mode and then switch to conventional power for the actual pushboat work – Elco’s repowered “Tender 4” stays in electric mode 24/7. Looking ahead, it is likely that in the near future, electric-powered harbor assist tugs will be able to do the exact same thing. When that happens, Elco will no doubt be there. 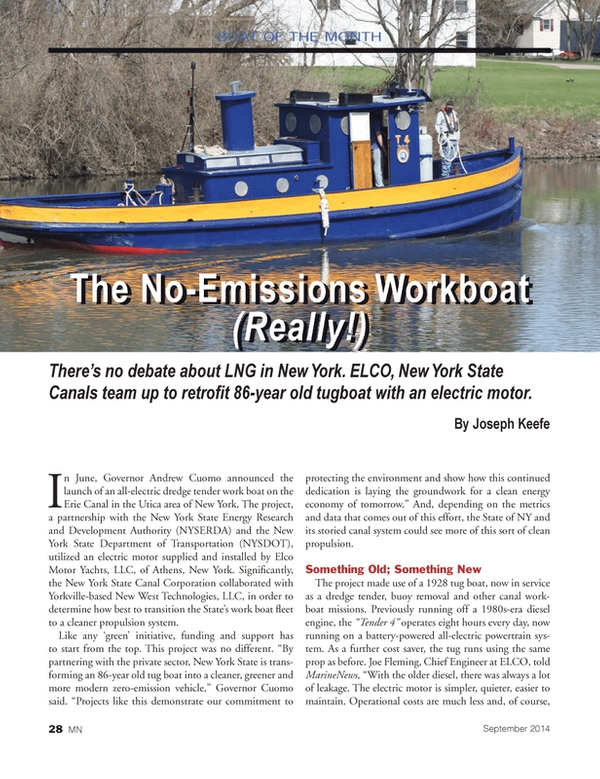