In Support of Affordable Energy

As its key mission, Waterways Council, Inc. (WCI) advocates for a modern and well-maintained system of inland waterways and ports. WCI’s top issues areas include the implementation of waterways’ improvement legislation in the recently enacted WRRDA; remembering Rivers (the Fourth “R”) among Rail, Roadways and Runways; improving the reliability of the waterways system and properly funding its Operations & Maintenance; assuring navigation reliability during times of flooding and drought; and supporting a balanced approach to invasive aquatic species. But WCI has added another critically important issue to its portfolio: supporting affordable energy options.
American consumers deserve affordable options for electricity, including our nation’s ever-abundant supply of coal. The nation’s inland waterways transport more than 20% of the coal used in electric power generation, and coal moved on the Ohio River represents nearly 60% of the commodity tonnage.
But the Environmental Protection Agency’s (EPA) greenhouse gas emissions plan to cut carbon pollution by 30 percent under the Clean Air Act could cost America’s economy more than $50 billion annually between now and 2030, according to a U.S. Chamber of Commerce’s Institute for 21st Century Energy report.
The legal wrangling has just begun, with the states of, Alabama, Indiana, Kansas, Kentucky, Louisiana, Nebraska, Ohio, Oklahoma, South Carolina, South Dakota, West Virginia and Wyoming filing a lawsuit in early August against the EPA for overstepping authority granted under the Clean Air Act.
The implementation of the EPA’s new, stringent standards for the coal generated electricity industry threatens the livelihood of coal miners, producers, shippers and specific coal-producing states. And we could begin to see rolling electric power grid outages -- “brown-outs” – due to government imposition of this rule if it is allowed to stand.
Legislation has been introduced on Capitol Hill -- The Electricity Security and Affordability Act (S. 1905; H.R. 3826) by Senator Joe Manchin (D-WV) and Rep. Ed Whitfield (R-KY), respectively. That legislation seeks to ensure the viability of American coal as an affordable energy source. WCI supports this initiative that will help keep coal in an “all of the above” energy strategy. Access to affordable energy sources in all forms strengthens our nation’s economy while sustaining American jobs.
In 2013, U.S. Department of Energy Secretary Ernie Moniz noted, “Coal and other fossil fuels provide 80 percent of the country’s energy and 70 percent of its electricity.” But due to fervent regulations like the EPA rule, domestic consumption of coal has been falling off and more coal is headed for export.   Metallurgic and thermal coal is being exported to China, India and even to Japan, but weakness in the U.S. and overseas markets, coupled with depressed pricing and the heavy regulatory environment here are factors that are impacting U.S. coal producers. Closures of coal-fired plants or conversion of them to natural gas is already happening, with resultant job losses.
According to the U.S. Energy Information Administration, by the year 2040 world-wide coal consumption is expected to be 50% higher than 2010 levels. Much of that growth comes from non-OECD countries like China and India. Developing nations will continue to seek cheap, plentiful coal for affordable energy and that will continue to be the case whether or not the U.S. is the supplier.
In an August 3, 2014 Op-Ed to the Wall Street Journal, Rep. Mike Kelly of Pennsylvania wrote, “The EPA’s war on coal has troubling economic implications for every American and U.S. business. As the new regulations take effect, Americans could see their electric bills increase annually by more than 10 percent – $150 for the average consumer – by the end of the decade, according to the American Action Forum. By keeping energy rates reliably low, coal helps give U.S. manufacturing its global edge against foreign competitors. On June 2 the National Association of Manufacturers warned that the EPA rule ‘could single-handedly eliminate this competitive advantage by removing reliable and abundant sources of energy from our nation’s energy mix.’”
Let’s not have the war on coal become the war on American consumers. 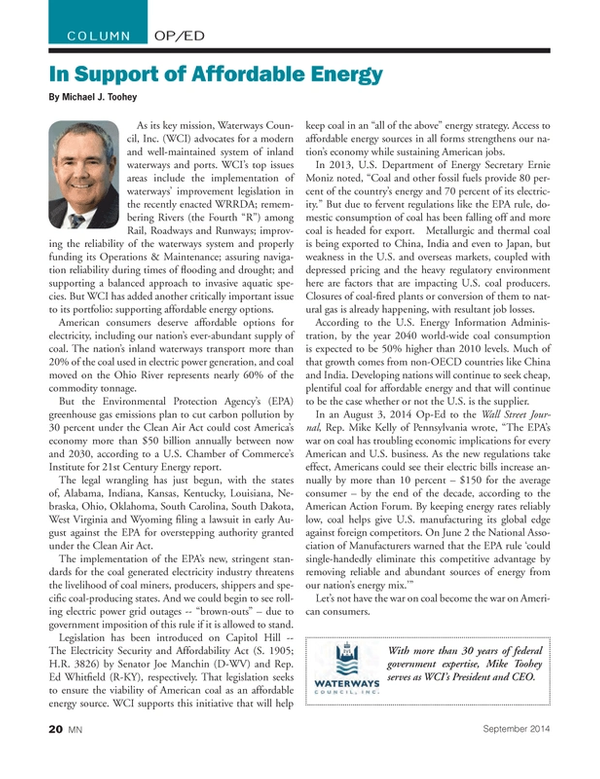 Read In Support of Affordable Energy in Pdf, Flash or Html5 edition of September 2014 Marine News