How Difficult is it to Obtain a Jones Act Waiver?

There always seems to be constant chatter about waiving the Jones Act. In reality, it is a simple task to demystify the thought that it is easy to obtain such waivers. To set the stage, in one of her first press conferences after taking the chairmanship of the Senate Energy Committee, Senator Mary Landrieu exclaimed that “Waiving the Jones Act literally hands over work to foreign shippers.”
The fact that Senator Landrieu’s comments were not directed against any potential waiver of the Jones Act shows the controversy that Jones Act waivers can rise in the maritime and energy sectors.  In reality, however, there exists a misconception amongst many about the ease of obtaining a waiver to the Jones Act.   Accordingly, this article will discuss the requirements for obtaining a waiver, analyze key past Jones Act waivers, and look to possibilities for future Jones Act waivers.

Jones Act Waivers in Law and Practice
The Jones Act prohibits the “transportation of merchandise by water, or by land and water, between points in the United States . . . either directly or via a foreign port” unless the vessel was built in the United States and is U.S.-owned and registered under the U.S.-flag (commonly called “coastwise vessels”). The general standard for waiving the Jones Act is if doing so is “necessary in the interest of national defense.” There are two types of Jones Act waivers. One type that is requested by the Secretary of Defense is granted automatically. The other type of waiver may be granted at the discretion of Secretary of the Department of Homeland Security (“DHS”). It is discretionary and may only be granted if the Administrator of the Maritime Administration (“MARAD”) first determines that no U.S.-flag vessels are available.

Process to Obtain a Discretionary Waiver
To request a Jones Act waiver, the first step is to submit a request to U.S. Customs and Border Protection (“CBP”), a DHS agency, for processing.  Upon receipt of a waiver request, CBP immediately forwards the request to MARAD, the Secretary of DHS, DOD, and—if the transportation is energy related—the Department of Energy (“DOE”). To determine if there are U.S.-flag vessels available to meet the needs, MARAD surveys the maritime industry to establish the capability and availability of coastwise vessels to meet the needs of the requested transportation.
After the request is submitted, DHS goes through a variety of consultations. To establish the “national security” standard, the Secretary of DHS generally consults with DOD. Additionally, if an area under another agency’s jurisdiction is affected, the relevant agency may weigh in as well. For example, if timber must be moved, the Department of Interior may provide advice. Finally, the domestic maritime industry will consult with DHS and the MARAD Administrator.

Examples of Past Jones Act Waivers
Exxon Valdez: Following the grounding of the Exxon Valdez in 1989, Exxon requested foreign-flag oil skimming barges to assist in clean-up efforts. MARAD, DOD, and the Coast Guard supported the waiver, with the Coast Guard adding that it supported their use until U.S.-flag vessels could effectively replace the vessels. DOE also recommended approval citing the interest of national defense since the failure to act promptly and effectively could jeopardize the country’s energy supplies. The Customs Service (CBP’s predecessor) ultimately granted the waiver, but mandated that the vessels could not be used for supply purposes. This waiver and other associated waivers were subsequently extended until the threat passed.
Hurricanes Katrina and Rita: Following a DOE request, DHS granted a waiver after Hurricane Katrina in 2005.  DHS stated that the catastrophic destruction brought about by Hurricane Katrina dramatically impeded the production and transportation of oil, gas, and other energy sources.  Additionally, the administration decided to draw down the strategic petroleum reserve (“SPR”) and needed foreign-flag vessels to transport the supply. There was nationwide support, especially with a spike in gas prices following the catastrophe. Additionally, domestic maritime industry supported the waiver, acknowledging there was not capacity to handle the problem. After Hurricane Rita struck the Gulf Coast a few weeks later, DHS issued another waiver. However, this time the domestic industry protested, claiming that there were coastwise-qualified vessels ready and able to assist. Following the general waiver, the administration issued waivers on a case-by-case basis.
Libya: In 2011, President Obama decided to draw down the SPR after commencing hostilities in Libya.  The President authorized the release of 30 million barrels of oil, apparently anticipating shortages due to the unavailability of Libyan crude oil.  Out of 45 shipments of crude, 44 used foreign-flag vessels. Following this SPR drawdown, Congress enacted legislation requiring future SPR waivers to provide a written justification for not using coastwise-qualified vessels.
Hurricane Sandy: Following Hurricane Sandy in 2012, DHS issued a waiver to allow foreign-flag vessels to transport petroleum products to New England and the Mid-Atlantic regions. The waiver did not allow for the transport of crude oil or blendstock components. DHS issued the waiver four days after Sandy’s landfall in New Jersey, and the waiver lasted almost three weeks.
Polar Vortex 2014—Waiver Request Denied: With the arrival of a difficult winter in 2013-2014, New Jersey ran low on salts to clear roadways. The state requested a Jones Act waiver, which was denied because transporting road salts did not meet the “national security” standard. The state has been criticized for making the request due to poor planning and the availability of U.S.-flag vessels.

Looking Ahead: Are there Waivers in Our Future?
The last time the United States became involved in a Middle Eastern conflict, Libya in 2011, the President preemptively authorized a release from the SPR and DHS issued a Jones Act waiver.  Although the U.S. forces have been involved in attacks in Iraq since August, drawing down on the SPR has not yet occurred. Gas prices and petroleum supply have not been interrupted, largely due to expansion in domestic supplies. However, a variety of factors may change this equation. At the time of writing, U.S. forces were increasing participation to hostilities in Syria, and conflict has raised supply risks in key oil producing countries such as Iraq, Syria, Yemen, and Libya. Additionally, international sanctions against Iran and Russia have further depleted potential suppliers of oil. Should domestic production slow or conflict in oil-producing regions increase, the administration may need to take a hard look at another SPR drawdown.
Additionally, the increase in domestic production could also be a factor leading to Jones Act waivers.  Currently, only 50 Jones Act compliant tankers exist, and growth in oil supply outpaces domestic transport capacity. Additionally, under current law, crude oil cannot be exported, leaving producers in a potential conundrum of not being able to get their product to any market. While this in itself may not meet the “national security” standard for issuing a waiver, as we have seen in the past, disruption to energy supplies has been grounds for a Jones Act waiver.
Waiving the Jones Act requires meeting a high standard, namely, that a waiver is necessary to the “national defense.” Although requests from DOD trigger an automatic waiver, discretionary waivers by DHS require a number of factors to be met. In addition to demonstrating a national security need, U.S.-vessels must not be available to undertake the proposed transport. Historically, waivers have not been granted absent a catastrophe, war, or a severe and substantial disruption to energy supplies. As evidenced above, this clearly has not happened often unless there was an imminent and substantial threat to the national security of the United States. Do not expect this standard to change in the future. 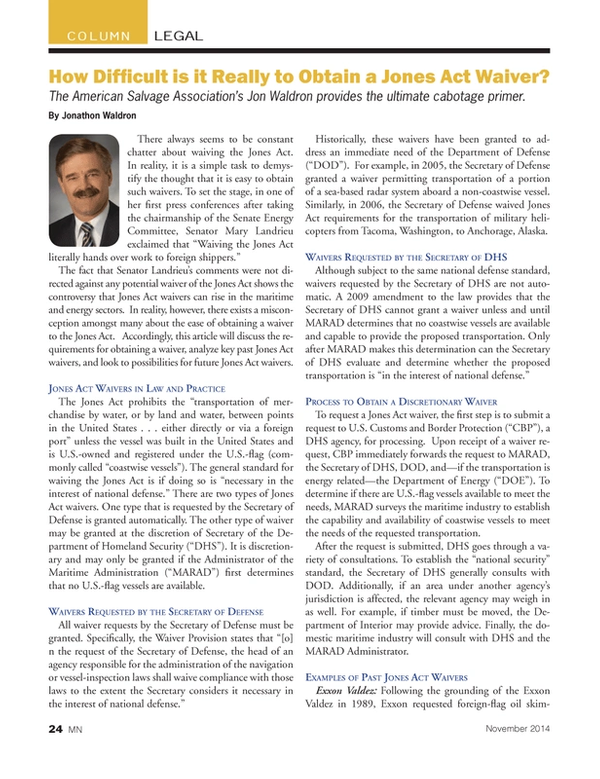 Read How Difficult is it to Obtain a Jones Act Waiver? in Pdf, Flash or Html5 edition of November 2014 Marine News