Addressing the Jones Act is just one aspect of an increasingly complicated boatbuilding environment. Stovepiped, poorly conceived regulations is another.

The sting of the recession is fading, but the economic vitality of the marine industry is still in jeopardy.  That’s because the current regulatory environment and the foreshadowing of its future is concerning. Boat builders and operators alike understand and accept that the premise of the rules is to promote safety, ensure security, protect the environment and sustain justice. Out of what was intended to be clear and guiding parameters comes chaos as multiple regulators are empowered and conflicting regulations pop into place.

Too Many Cooks in the Kitchen
Compliance with the regulations can be daunting and in the vessel construction arena, the onus ultimately rests with the boat builder—even the naval architects tend to shy away from accountability.  Some boat buyers, often larger corporations, local/small government entities, or sometimes academic institutions get nervous about compliance; after all, their funding is predicated upon so many levels of conformity. Such buyers think they are covered by generating a laundry list of government agencies and marine societies and then stipulating in the contract that each and every applicable regulation must be adhered to. A builder would not only be foolish to consider such a contract, but it is utterly impossible to calculate a tangible cost for the risk, let alone the necessary materials.
The problem is that there is overlap, inconsistencies, and conflict between many of such regulations that can be interpreted as applicable. Something as benign as plumbing systems can be stipulated several different ways by the likes of the USCG or ABS and the cost differential is staggering. Further issues emerge when the regulator is not always the rule maker. The Department of Justice issues Americans with Disabilities Act regulations, which soon will include vessel construction guidelines for passenger vessels, thus leaving the USCG in charge of enforcement. Boat builders and designers will be forced to somehow balance the significant details of minimum height door coamings and wheelchair accessible thresholds, which is not so easy when some compliant ramp runs are not viably possible.  Such will also be the case for the USCG to adjust their rules and inspection procedures as EPA Tier IV fully evolves. The EPA is largely concerned with the emissions, but it is up to the USCG to determine how to safely design and install the urea-based after treatment systems. Stewardship regulations like EPA’s tier system are impactful, but regulating the industry right out of the environment is not the right approach to greening the sea.

Compensating for Something
Tonnage regulation is one of the oldest principles. Its roots extend back hundreds of years, yet everyone does whatever they can to skirt it. Tonnage rules simply beg to be broken. Tonnage regulations and tonnage admeasurement are akin to year-round Christmas lights—tacky most of the time, but on occasion can be appreciated and beneficial. For context, tonnage regulations pertain to a measurement of volume. The calculated volume of the vessel is then used to stipulate crew qualifications and is the basis for applying other significant safety and operating regulations. The issue is that a few loopholes exist regarding tonnage admeasurement.
Many vessels that should fall under the purview of more stringent requirements can escape them with a few strategically placed tonnage openings in the super structure and deep frames integrated into the hull. The art of manipulating tonnage is as easy as it sounds. Regardless, customers now enter shipyards with the full expectation that their vessel should be under 100 gross tons or some other reduced tonnage and the builder and designer must do whatever it takes to achieve the desired calculation no matter how large of vessel it is. Outside of the most simplified tonnage calculations, the U.S. Coast Guard even defers to outside contractors and classification societies to produce properly calculated tonnage certificates.
Phil Essex, of Moorsom Consulting, is an expert in deciphering tonnage and provides consultation on tonnage reduction. Essex claims that for some vessels, “the use of tonnage openings – essentially a weather-tight means of access into a deckhouse – permits the exemption of space from gross tonnage.    Depending on the interior layout, a properly positioned tonnage opening in a passenger vessel could permit the exemption of the entire tier of superstructure from gross tonnage.”
What’s the purpose of such an opening? The opening, which must be positioned on a forward or aft facing bulkhead is not water-tight, does not make the vessel any smaller, nor any safer to operate, and on the contrary does not in fact reduce any actual volume of the vessel. Nonetheless, if done properly, an operator with reduced tonnage may escape other onerous regulations and can cut crewing costs by hiring a captain with a lower endorsement. It is possible that the tonnage game may finally change as the rules are currently in the process of revision.

Proud to be American
Compliance with the Buy America Act for new vessel construction is not only patriotic but bodes well for promoting the common good of commerce within our country. The Buy America Act is nearly always tied to projects with underlying federal funding. Compliance versus cost does not typically pose a threat as these projects are often funded to such a level to compensate for domestic procurement.  The issue is really one of supply. Without loopholes in place, boat builders would flounder in compliance.
Raw materials for manufacturing aluminum and even steel to some extent are typically sourced abroad in Europe or Asia. Finding American-built, emissions compliant, commercially rated, marine diesel engines is less common than expected. Reaching  compliance levels of more than 50% American content requires that most of the large ticket components are stamped made in the USA; however, many key products that are engineered specifically for marine use (engines, gears, propellers, water jets, electronics, etc.) tend to be foreign produced. When the requirement is only being met through wiggle room, it should be a clear sign that stronger incentives for stateside marine manufacturing are needed. Likewise, keeping up with the Jones Act also comes at a premium. There are elements of validity to the revise and repeal arguments, but such action will not enhance our industry. The Jones Act must remain intact to keep the door open for the next generation of mariners. Our industry is already struggling in recruitment efforts and pulling the Jones Act would be the straw.

Policy Makeover
There certainly is a place for regulation and a proper system with viable policy is required to sustain our industry. Policymakers and stakeholders must work in partnership to ensure that productive policy is in place and antiquated or conflicting regulations are brought current. Regulators also need to be willing to rethink and explore alternatives as technology develops or if the policy causes considerable discord and avoidance. Never again should Sequestration restrict the ability for all stakeholders to sit at the regulatory partnership table. Trouble also develops when regulators are stuck ‘inside the box’ and fail to negotiate or see any gray shadows in the corners that can sometimes make all the difference in the world, while at the same time upholding most of the policy’s original intent. Lastly, the EPA’s forced tier development has greatly hindered advances in promising LNG technology and it should be clear that regulation cannot hinder innovation. Working together we can keep our industry moving forward through sustainable regulation, ‘win-win.’ 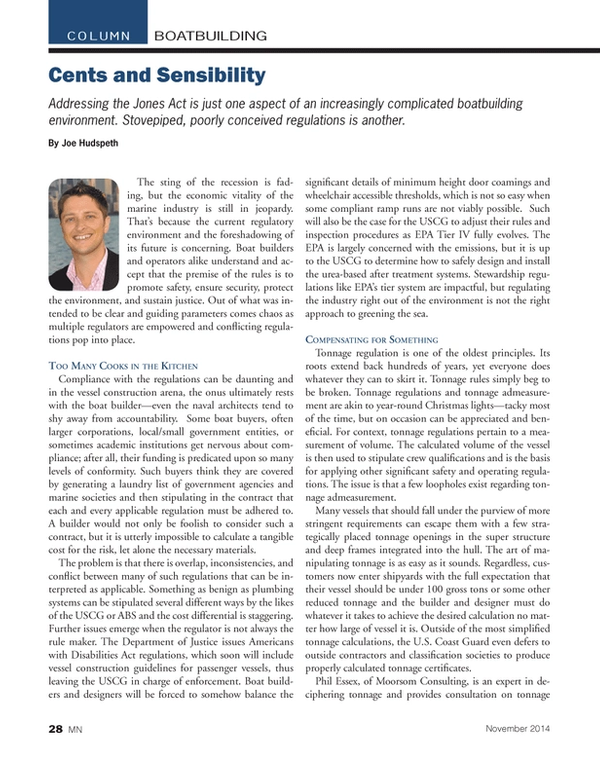