While most people know that ferries are a method of transportation, few have a good understanding of the nature of the sector and its importance. In Canada, ferries transport more than 55 million passengers, over 19 million vehicles, billions of dollars’ worth of goods and they employ close to 35,000 people. Beyond the numbers are the personal stories. Ferries are instrumental in helping:

For a good portion of Canadians, ferries are part of their way of life. Some are quite passionate about their ferries – something which shows when schedules, fares or routes are changed. But while this mode of transportation is as vital for some communities as other methods of transportation, the ferry sector does not, generally, receive the same amount of visibility. And that is an issue.

Planes, trains and automobiles. That’s not just the title of a movie, it is also what immediately comes to mind when most people think about transportation infrastructure. And we often see that translated into practice when government priorities ignore ferries. A parliamentary committee reviewing Canada’s transportation infrastructure recently managed to publish a report without mentioning ferries once. That raises red flags for our sector and for the millions of Canadians that rely on ferry transportation.

The Canadian federal government has announced that it will use infrastructure funding as a way to support economic growth. With this decision, tens of billions of dollars will be spent funding the building of bridges and highways, expanding airports, enhancing rail facilities and other projects. It is crucial to allow the ferry sector to also benefit from these infrastructure programs.

Some regions have very little ferry transportation, but others are entirely dependent on ferry services. While the reliance on ferries for the transportation of passengers, vehicles and goods may not always be evident in a capital city such as Ottawa (although there are a few ferries located in the immediate vicinity), it should not stop the decision makers from including ferries in their infrastructure programs.

Canada’s recent federal election has resulted in a change of government. The new Prime Minister has been open to having provincial governments and municipalities decide on their priorities. This would allow provinces and regions to better define their needs based on their geographic landscape. We certainly support this and welcome Prime Minister Trudeau’s leadership on this.

Ferries have been a method of transportation in North America for centuries. Indigenous communities have used boats to transport passengers and goods between communities and the same holds true for the French, English and Spanish colonists that came later. We have been able to maintain contact between communities separated by bodies of water, thanks to the efficiency of our ferry systems.

Whether it is travelling on the ocean to reach an island, crossing a river where no bridge exists, going across a lake or replacing an ice bridge by using a ferry system in the summer months, ferries are an environmentally friendly, efficient and economical transport mechanism. Governments should support this mode of transportation.

In the next few months, the ferry sector will make its case known. It will advocate for infrastructure funding programs that are inclusive of all modes of transportation. Stakeholders will need to be heard as well. This means that the suppliers benefiting from the billions of dollars spent by the ferry sector, the businesses that depend on the shipment of goods by ferries, daily commuters, tourism organizations that are located in regions served by ferries, and municipal governments, will all need to be vocal on these issues.

With a strong safety record, environmentally-friendly policies in place and flexibility to serve customers, ferries are the choice of millions of passengers on an annual basis. This will continue for the foreseeable future. Sound and inclusive government policies will be needed to serve the sector. 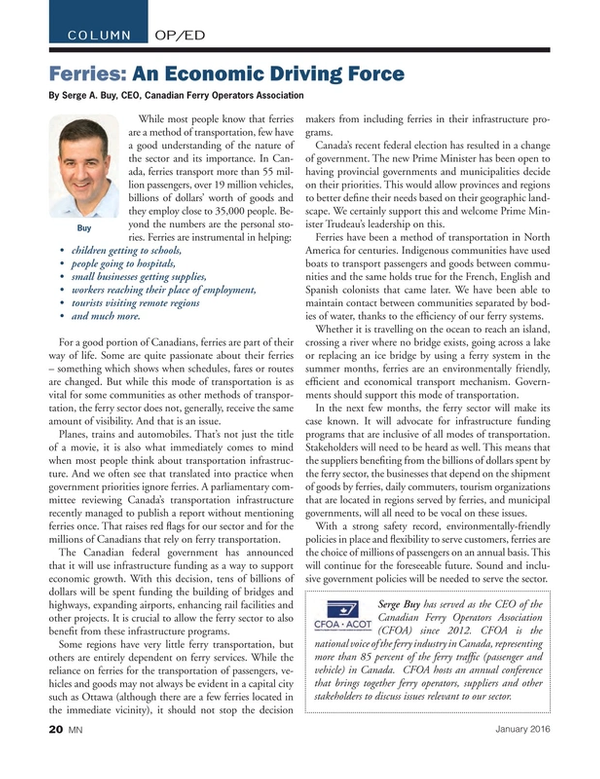