Interferry: Aiming High in the Cause of Common Sense

With U.S. origins dating back more than 40 years, Interferry is the trade association and main voice for the global ferry sector – a crucial but often forgotten part of the wider shipping industry.  Historically this has been particularly true with regard to regulatory issues at the International Maritime Organization (IMO), but in recent times the association has emerged as an increasingly influential platform within the corridors of power.

Most notably, Interferry obtained IMO consultative status in 2003 and built on those foundations in 2011 by establishing a regulatory office in Belgium’s capital Brussels – which is not only at the heart of European Union affairs, but also within easy striking distance of IMO headquarters in London.

Over these past several years, the big issues for ferries have been the drastically reduced sulphur limits in Emission Control Areas, a battle we lost; and the Energy Efficiency Design Index, a battle we won. A 50 percent success rate isn’t bad, but by learning from those experiences we are aiming ever higher both on current regulatory issues and those likely ahead in the coming years.

The current hot topic for ferries is the Ballast Water Management Convention (BWMC). It has been a decade since this was initially approved at the IMO – but that was only the start of a long journey, as each new shipping regulations convention has to be ratified by a specified number of member states representing a specified percentage of global tonnage before entering force. That is now about to happen.

From a global perspective, this is a good thing because the BWMC is designed to keep potentially harmful aquatic species from one part of the world from invading another part of the world, causing havoc to the local fauna. Does this have much to do with ferries? Probably not since ferries usually serve local markets within common environmental zones. But the Convention is not so simple. It does allow for exemptions, but requires a full environmental assessment of each port served by the route to prove that no harmful species could be transported between them. This is expensive, cumbersome and seemingly inappropriate for short ferry routes, so Interferry will be proposing a simpler and more streamlined process for ferry operation exemptions.

You might ask why we are trying to fix the ballast water problem at this late date. Firstly, Interferry was not IMO accredited when the Convention was first adopted so we had no input on the initial drafting. And once a Convention is adopted by the IMO, it cannot be amended until entering into force, which explains why our proposal is being finalized as the implementation date approaches.

Several other regulatory issues are approaching very quickly. The first is damage stability rules for Ro-Ro ferries. The issue has been highlighted in recent decades primarily as a result of two major incidents, the Herald of Free Enterprise in 1987 and the Estonia in 1994. Structural regulations were altered as part of the so-called Stockholm Agreement and subsequent revisions were made to SOLAS. Over the past 15 years a number of academic studies have been commissioned by the European Union to review and make recommendations on these rules. Very recently, the European Commission has put forward a proposal to the IMO that very much echoes the IMO’s support for solutions based on more steel and technology. We appreciate that building the unsinkable ship is an attractive solution, but – much like our cousins in aviation – we would rather focus on how to prevent accidents in the first place.

In any case, the suggested additional structural rules will be expensive to implement and could seriously reduce the functional capability of the modern Ro-Ro ferry. Furthermore, energy efficiency would be reduced because new ships would have to be designed in a manner that requires more fuel to push them through the water. Saving lives certainly trumps environmental considerations, but in this case it is a very unfortunate trade-off because safety levels could surely have been much improved if operational aspects were also addressed. Interferry therefore advocates a balanced approach combining structural improvements with more emphasis on operational procedures.

Fire safety is another upcoming issue that once again has been prompted by accidents. The Norman Atlantic fire in the Mediterranean in 2014 highlighted a growing concern about fires on vehicle decks. The accident investigation is still underway but will undoubtedly lead to discussions and proposals at IMO. Once again, Interferry will likely be pushing for a balanced approach where both structural and operational solutions are considered. Feedback from our members suggests that one of the stand-out issues is how to improve the speed and level of response to an onboard incident. To our mind, the ‘more and better technology’ approach must be matched by greater focus on the human decision-making process, which demands a fine balance between rational assessment and responding to each alarm as if a major fire was definitely underway.

Back on the environmental front, it has just been announced that the IMO’s Marine Environment Protection Committee (MEPC) has agreed in principle to postpone implementation of MARPOL Annex IV requirements prohibiting passenger vessels from discharging sewage within the Baltic Sea special area. The requirements were due in force for new passenger ships from January 1, 2016 but a delay in arranging adequate port reception facilities has made this impossible. Subject to confirmation at the next MEPC meeting in April, the effective dates will now be  June 1, 2019 for new ships and June 1, 2021 for existing vessels. Over several years, Interferry has engaged closely with Baltic marine environment body HELCOM to provide technical and operational input, but we still have concerns over compliance because the regulations place more of a mandatory burden on ferries than on the ports. As things stand now, when these new rules enter force it will be the ship’s master who is not in compliance if a port cannot receive the sewage for whatever reason. The master will then file a non-conformity complaint to the port state and will eventually be cleared, but this could be an ever-repeated process as there are no apparent regulatory tools to force ports to actually provide the service.

Meanwhile, the European Union has introduced the strangely named Monitoring, Reporting and Verification (MRV) scheme for CO2 emissions from maritime transport. All ships calling at EU ports will have to monitor and report their CO2 emissions (technically – fuel consumption) as from January 1, 2018. The main concern for Interferry is how the requirement to relate the emissions to ‘transport work’ will be defined. It might be an easy matter for some ship types – ton-miles for bulk carriers, TEU-miles for container ships, passenger-miles for cruise ships – but ferries might be carrying passengers, automobiles, trucks, coaches, caravans, stacked containers, bicycles and even rail wagons. How do you objectively define that type of cargo mix in a single measure?

We have been chairing a correspondence group to recommend a ferry-specific metric. This is vital work because MRV is likely to be the first stage of a very profound development in shipping regulations. Once governments start measuring CO2 emissions, the next logical step is to start charging for it. Welcome to the climate change debate … 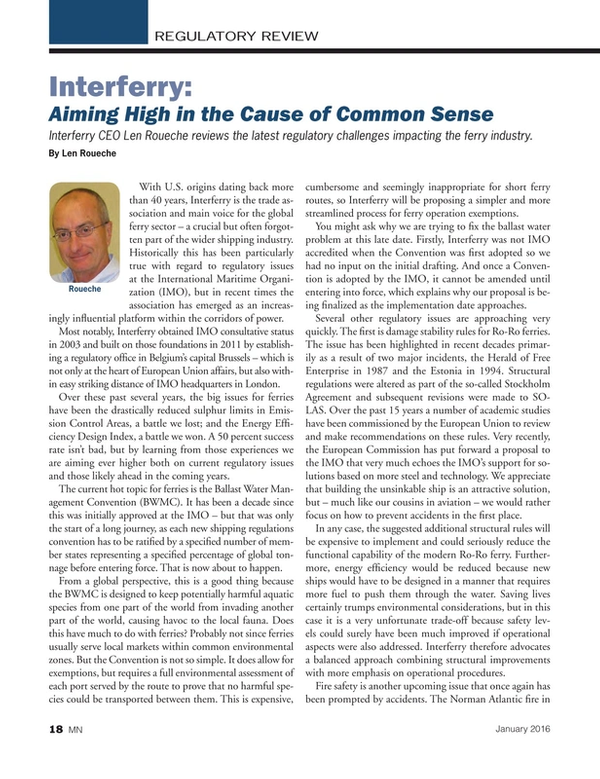 Read Interferry: Aiming High in the Cause of Common Sense in Pdf, Flash or Html5 edition of January 2016 Marine News