OP/ED: Is Short Sea shipping on the horizon along the Atlantic Intracoastal Waterway?

Are paradigms shifting on the increased role of inland waterways with respect to short sea shipping and the Nation’s marine transportation system?

Investigation and implementation of new commerce shipping avenues are becoming more common along the Eastern seaboard of the United States with each new announcement of a Port Authority supporting the development of shipping routes for container on barge services.
In the past few weeks, the South Carolina Ports Authority (SCPA) furthered their quest to develop a marine highway to support the Port of Charleston in South Carolina. According to SCPA Chief Operating Officer Barbara Melvin, “To be a responsible neighbor here in the Charleston area as we grow, we wanted to find a way to see if we could move containers in off-hours or utilize what we call the marine highway rather than the interstate.”

At the Atlantic Intracoastal Waterway Association, we couldn’t agree more and we believe in the need to find alternate transportation routes in addition to roadways and railways.  Additionally, the Port of Georgetown, South Carolina could be utilized as a handling facility for some of this barge traffic since it is depth-limited and is becoming land locked from the Atlantic Ocean. We welcome these creative strategies from the SPCA.

Yet, these increased transportation options are not new to us. The Virginia Port Authority (VPA) has been utilizing Marine Highway 64 for years to connect to the Richmond Marine Terminal (RMT) in Virginia and expanded their capability in 2017 to include refrigerated cargo. A prepared VPA press release said, “we have several current and potential users of RMT that are in the food and beverage, and refrigerated and discount grocery industry that are expressing interest in using the barge to move reefer (refrigerated) cargo,” said John. F. Reinhart, CEO and executive director of the VPA. He continued, “The power unit enables us to provide a more comprehensive level of barge service to current and potential customers and continue to serve as a catalyst for commerce in the Richmond metro area and beyond.”

The strong desire to alleviate traffic congestion along our interstate system is another reason to invest and develop our Marine Transportation System as demand continues to grow. Based on estimates from the American Trucking Association – the largest national trade association for the trucking industry – the United States is currently facing a shortage of around 50,000 long haul and over-the-road drivers and that number is expected to increase to 175,000 by 2026. And, ATA Economist Bob Costello says that filling positions for the Trucking industry is not easy.

“Carriers repeatedly say it isn’t that they don’t have enough applicants for their open positions – they do. What they do not have, is enough applicants who meet the demanding qualifications to be hired. In some cases, carriers must reject 90% of applicants out of hand because they fail to meet at least one of the prerequisites to drive in interstate commerce.” The trucking industry adds immense value to America’s interstate commerce and, yet we must begin to see the writing on the wall that vehicular congestion will continue to be a factor in the nation’s growth patterns.

An expanded U.S. railway system is another approach to increase modes of shipping, but the 137,000-mile railroad network doesn’t reach everywhere and the political capital in the U.S. is nonexistent compared to Europe’s multi-modal connectivity. In some of our coastal counties, there isn’t even one mile of continuous rail and there are numerous gaps between our nation’s ports. These constraints highlight the urgency to turn to Marine Highway 95.

If we collectively invest in the maintenance of the AIWW, we could unlock new and expand existing economic opportunities along the coast. From our perspective, the comprehensive transportation system needs to include an ‘all the above’ approach to better utilize coastal and inland waterways, inland roads and interstate systems along with rail. We support investment in transportation alternatives. In fact, the Maritime Administration of the U.S. Department of Transportation Beyond Traffic 2045 reports an estimated increase in freight volume by 45% between 2015 and 2040 with an associated increase of just 10% on our nation’s waterways and a 43% and 37% increase on roadways and railways, respectively.

If we can identify those products which are better suited for waterway transportation and move products from the other modes of transportation, it will free up additional capacity. This shift is more environmentally sound and cost effective and will also accommodate cargo that is too large to ship by other means. The alternative we face is to witness continued and increased burden on existing modes and create unsustainable congestion leading to further detrimental impacts to the entire U.S. transportation network and the overall economy. Exploring short sea shipping is a critically important avenue to cost share in America’s shipping future.

This article first appeared in the May 2019 print edition of MarineNews magazine. 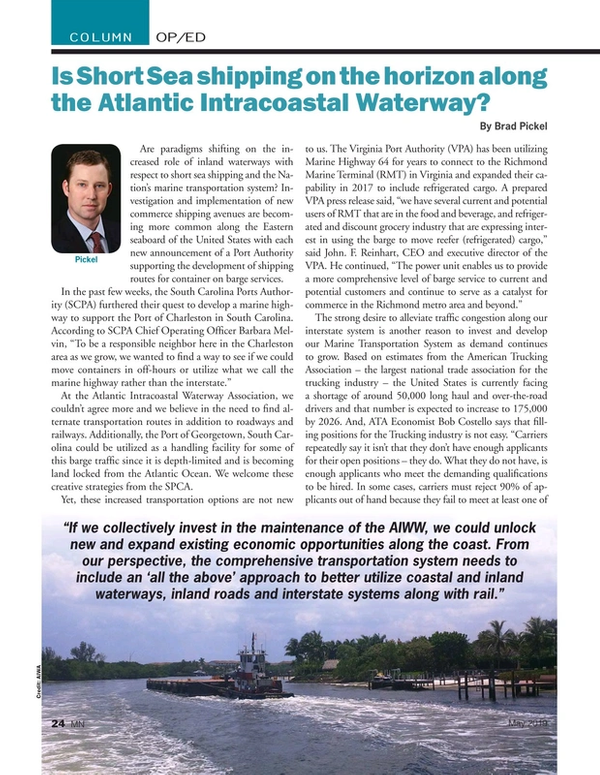 Read OP/ED: Is Short Sea shipping on the horizon along the Atlantic Intracoastal Waterway? in Pdf, Flash or Html5 edition of May 2019 Marine News