The subchapter M towboat rules, safety management systems, and an emerging culture shift on the inland waterways brings with it a fresh look at how to manage risk. Is it time for P&I clubs to return to brown water? And should inland operators welcome them home?

A mass exodus from the inland marine sector by P&I clubs in the mid-1990’s was precipitated by many things. Today, these very same vessels have been put under the subchapter M regime, and most are adapting SMS as a culture in the process. Moreover, and without a doubt, the environmental record of this sector has improved 99% since the 1970’s. As all of that unfolds, the P&I clubs have begun to look at this sector more closely and, at the same time, the shift to a ‘P&I’ style risk management scheme may make for sense for the operators themselves.

According to Joe Hughes, Chairman & Chief Executive Officer of The American Club, “The engagement of International Group P&I clubs in the US inland marine sector began in earnest during the early 1980’s. Although only a few clubs were first involved, business grew over time, albeit against significant Jones Act risk. A later retreat was a function more of a failure to match premium with exposure than of poor safety and environmental standards. It was also attended by significant non-forecasted supplementary calls on the part of many of the clubs involved, together with large rises in general increases from year to year.”

In response, some disenchantment took hold on both sides of the divide between clubs and their inland marine members. Nevertheless, some clubs have maintained their interest in the sector, albeit at a more modest level than was previously the case. That interest is picking up, and, gaining momentum.

Today, a majority of the inland markets utilize the fixed premium formulae. And, it is also true that commercial providers of fixed premium liability insurance to the inland marine sector have experienced their own periods of stress over the years. Still, at present, most liability cover in this field is provided by such carriers. That trend also reflects the fact that many inland marine operators are engaged in the transportation of relatively low-value, dry cargoes which do not generate the perceived need for the very high limits of cover (especially for pollution) typically available from the P&I clubs. Beyond this, some operators are simply disinclined to expose themselves to the obligations of mutuality.

In addition, it is not uncommon in this sector to “package” P&I cover with hull and other insurances such as MEL, MGL etc. While sometimes more easily accomplished by fixed premium, commercial underwriters, for the larger operators, club P&I may still be the best option, particularly for those carrying petroleum cargoes. All that said; it is estimated that in the brown water space, no more than 10% or so of liability of coverage is provided by P&I clubs.

Another Look: Should You Switch?
Some P&I stakeholders insist that inland operators will do better by switching to ‘the club’ from fixed premiums. “The most obvious upside,” says Hughes, “is the availability from clubs of high limits of cover at comparatively modest cost. Another advantage is the availability of superior claims handling, loss prevention and other services for which clubs are rightly renowned.” For example, Eagle Ocean America – a sister company to the Managers of the American P&I Club – provides the fixed premium certainty of commercial insurance, the ability to package cover in various ways together and bundles that with well-known claims handling and other capabilities available to American P&I Club Members.

But, what when a particular client experiences a year of bad losses, that reality impacts the bottom line at renewal time. What’s key here is the difference between how this is handled in a ‘fixed premium’ world as opposed to ‘the club’ That’s because a Mutual P&I clubs’ overarching concern is the collective well-being of their membership. Since they operate on a not-for-profit basis – and are thus not compelled to satisfy the expectations of outside shareholders – they are alive to the need to maintain equity among all members of the club, and tend to avoid speculative pricing to gain market share.

P&I clubs typically adopt the long view in risk selection and premium pricing in their approach to any market, including the inland marine sector. Hughes explains, “Any prudent underwriter should be motivated by exactly the same instincts, but it is arguable that premium volume and market share might be a more insistent motivation to a commercial underwriter than it would be to a P&I club. This could lead to levels of pricing which do not fully reflect the risks being insured.”

As the typical inland operator depends on fixed priced insurance, ‘the race to the bottom’ is caused by intense competition between insurers. The P&I system works a bit differently, although those competitive pressures exist in any model.

Joe Hughes explains the situation, saying, “Certainly the ‘race to the bottom’ has featured intermittently in the fixed premium market – and not just within the inland marine sector. The International Group P&I system operates a little differently by virtue of the IGA which imposes pricing discipline where tonnage moves from club to club at renewal, or when new vessels attach to fleets during the currency of a policy year. There remains significant competition, nonetheless, within the Group although it might sometimes not appear to be as intense as it does among commercial underwriters.”

Unlike a fixed pricing model, P&I clubs don’t operate on a ‘for profit’ basis. Instead, P&I clubs are assessable mutuals. They do not aim to create profits for outside shareholders. Members of a club are both insurers and insureds, the mutual principle causing excess funds generated in good years to be transferred to reserves in order to smooth out deficiencies on bad years and, over time, to provide stability of cost for members. While clubs will obviously try to avoid losses, they are not designed to generate profits beyond the point necessary to create stable reserve funding.

SubM Arrives, and with it, SMS
As the domestic inland sector evolves in the subchapter M era, so too does their use of SMS and attention to building a better safety culture. And while some inland operators have long had robust safety schemes, this wasn’t necessarily the rule as opposed to the exception. Indeed, often it reflected a smaller firm’s ability to financially support that model. But that way of doing business (SMS driven) more closely mirrors the blue water, deep draft model.

The blue water, deep-sea model of loss prevention is not intrinsically any different from that which governs the inland marine sector. However, because blue water vessels are larger and may therefore have an inherent propensity to generate more extensive damage than vessels in inland marine business, loss prevention – codified in the form of the ISM regulations in the late 1990s – may have in the past figured more prominently in the blue water sector by comparison with domestic, brown water trades.

P&I Clubs – both historically and in current times – employ far more in way of loss control personnel, ex-senior mariners and in general, personnel who work with their members to find ways to lower incident rates, pollution. That’s something that many inland operators haven’t seen before.
P&I clubs have added to their loss prevention capabilities in recent years. The initiatives of today, and the resources available to the clubs, represent the gold standard within the insurance industry as a whole. Joe Hughes agrees. “While much of this development has been aimed at blue water operators, some of it is inland marine-specific. The American Club has a significant US flag, Jones Act constituency and much of its loss prevention outreach has been related to this, and will continue to form an important part of the overall spectrum of the Club’s professional capabilities.”

Indeed, all Group clubs have significant loss prevention capabilities. The American Club in particular prides itself on the range of its services in this area.  In addition to a very wide range of loss prevention literature, e-learning tools, videos, and general publications, the Club is also able to undertake management audit assistance for its members and in-house and other seminar guidance on a wide variety of subjects. Some of the American Club’s current initiatives – which are particularly relevant to inland operators – are now being pursued in conjunction with ABS and Lamar University.

P&I Cover: Not Just for ‘the Blues’
In the green water sector – offshore energy support, for example – some stakeholders are returning to a P&I style scheme. In these cases, ‘size’ does matter. Large parts of the green water sector have been consumers of mutual P&I cover – in fact more so than brown water operators within the United States. This is partly because green water operators are often involved in the carriage of petroleum products, and their commercial counterparties expect them to have at least $1 billion of oil pollution cover. A similar dynamic applies in the offshore oil industry, where all the major players expect those who service their rigs etc. to have high limits of cover.  In this respect there are economies of scale to be found in an International Group club cover by virtue of the Group’s bulk reinsurance purchasing power enabling it to access very high limits of indemnity at comparatively low cost.

It is important for brown water operators to understand that they do have choices, and these choices involve the old adage, ‘horses for courses.’ There may not be a compelling reason why a brown water operator should have a mutual entry – particularly if that operator does not require high limits of liability and needs to have other forms of insurance packaged with the core P&I. On the other hand, some operators – by reference to the size of their fleets and their potential exposures – may find a P&I club a more sensible option in individual cases.

The advent of subchapter M has come and gone. The rule brings with it significant baggage. Smaller, so-called ‘mom-and-pop’ operators may not be able to continue without significant changes to their operating conditions. Separately, consolidation on the river is gathering steam. Ever larger firms with more diversified customer bases, now with far flung assets operating in unfamiliar waters, need more coverage. The P&I sector wants them to take another look at their model. That might not be a bad idea. Indeed, what do you have to lose?

This article first appeared in May print edition of MarineNews magazine. 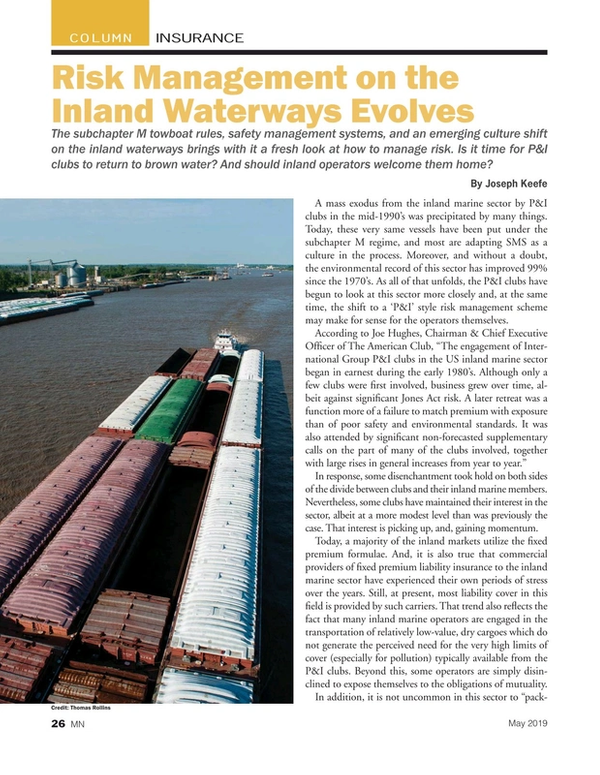 Read Risk Management on the Inland Waterways Evolves in Pdf, Flash or Html5 edition of May 2019 Marine News