INLAND FINANCE: But I Don’t Need That Much

When enough to meet the need is not enough to get the help.

From my office window in downtown St. Louis, I can see a dramatic illustration of the inefficiency in how our country moves freight. My office faces east, and I look down on a stretch of Interstate 70, that major east-west highway that runs from Baltimore to Interstate 15 in Utah. It is not unusual to see the traffic on this highway heavily congested, even at a standstill at times. This congested traffic usually includes many tractor-trailer trucks. While some of these trucks might be there to cover the proverbial last-mile for a delivery to a local destination, I feel reasonably certain that, given the nature of this highway, most of them are just passing through, on their way from a remote origin to an equally remote destination.

But just beyond Interstate 70 to the east, as viewed from my perch on the 38th floor, is another highway, where the traffic is never congested and is typically moving steadily. I am referring, of course, to the Mississippi River, which is part of what the U.S. Department of Transportation has designated Marine Highway M-55. As I look down on this contrast in traffic conditions on these two highways, it occurs to me to wonder if maybe, just maybe, some of that freight that is sitting at a standstill on the asphalt highway couldn’t be carried just as well on the aquatic one. It would also seem likely to save a great deal of fuel, and to avoid a fair amount of exhaust emissions.

As explained on the website of the U.S. Maritime Administration (MarAd), this is in fact the mission of the Marine Highway Program, namely, “to expand the use of our Nation’s navigable waterways to relieve landside congestion, reduce air emissions, provide new transportation options, and generate other public benefits by increasing the efficiency of the surface transportation system.” It is such considerations as these that have led to proposals to carry containers on barges, or to build special-purpose vessels specifically designed for such use, or to move freight off of the highways and on to the waterways in other ways.

Your Mode: only as good as the one that precedes or follows it
But there is one critically important thing that the highways and the waterways have in common:  you have to be able to get on them and get off of them. The highways have their access ramps and exit ramps. On the inland waterways, these points of access and egress are the many ports and terminals that make the 12,000 commercially navigable miles of the inland and intra-coastal waterways an actual system for freight transportation.
The ports and terminals do much more than just get cargo on to, and off of, the inland waterways.  They are the also where cargo moves to and from all of the modes of carriage – water, road, and rail.  To and from the truck; to and from the railcar; to and from the barge. They are where the gears of our nation’s freight transportation system meet and mesh. Every river channel could be dredged clean and clear, and every lock and dam could be made like new, and it would matter little if cargo could not get to and from the river and the other modes that make up our total transportation network, through the ports and terminals.

In this regard, the value of our nation’s large coastal seaports is being increasingly recognized. Recent legislation, for example, has finally redirected the substantial amounts that have accumulated in the Harbor Maintenance Trust Fund back to their originally intended purpose.
However, the needs of the many, often relatively small, ports and terminals on the inland waterways continue to be overlooked. For example, in the Consolidated Appropriations Act of 2019, which ended the most recent government shutdown, $200 million was appropriated for the Port Infrastructure Development Program that is administered by MarAd. However, as passed, the bill specifies that “projects eligible for funding provided under this heading shall be projects for coastal seaports” (Division F, Title I; emphasis added). For the Marine Highways Program, under which smaller inland ports and terminals would be eligible to receive assistance, only $7 million was appropriated out of the total appropriations to MarAd of almost $1 billion.

Addressing the Imbalance
Presently there are only limited funding opportunities that make inland port infrastructure and inland ports of entry eligible for funding at all, and only a small amount of total funding from those programs typically fund port-type projects. This is the case with BUILD (Better Utilizing Investments to Leverage Development, formerly TIGER) and the INFRA (Infrastructure for Rebuilding America) programs. As a practical matter, inland ports and terminals cannot compete effectively for funding against large highway or bridge projects, and often cannot even meet the $5 million project minimum required by current programs. Somewhat ironically, infrastructure projects of inland ports and terminal facilities cannot obtain funding because they are less costly than the minimum required for those programs.

Efforts are being made in the direction of addressing this imbalance. In October 2018, Senator Tom Carper (D-DE), Ranking Member on the Senate Environment and Public Works Committee, introduced a bill, S.3587, to allow greater amounts to be granted for ports, railways, and intermodal hubs. Specifically, the bill aims to amend the Nationally Significant Freight and Highway Projects Program – which was created as part of Fixing America’s Surface Transportation Act (FAST Act) and under which MarAd awards FASTLANE grants – by removing the cap on INFRA grants to multimodal freight projects.  However, Senator Carper’s bill would still leave in place the $5 million project minimum requirement.

The silver lining may be that at least Congress has appropriated $200 million for port infrastructure development and that an effort is being made to expand the amount available for grants to ports and intermodal hubs.

In July 2018 Senator Roger Wicker (R-MS) introduced a bill, the “Port Operations, Research, and Technology (PORT) Act” (S. 3273), to create a port-related infrastructure grants program to build on the Port Infrastructure Development Program administered by MarAd.  This bill specified a $1 million project minimum requirement. Although the bill was reported favorably out of the Senate Commerce, Science, and Transportation Committee in August 2018, it was not voted on by the end of the 115th Congress.

For the current 116th Congress, Senator Wicker is the Chair of the Senate Commerce, Science, and Transportation Committee, so he is in a position to advance his earlier bill. His bill is an authorization bill, not an appropriations bill, so if his bill is eventually enacted into law, it will provide a basis for Congress to provide funding for an expanded Port Infrastructure Development Program, including eligibility for “small” projects that need “only” $1 million.

“Small” is in the eye of the beholder. What might seem “small” from the perspective of Congress seeking to support the nation’s freight transportation system as a whole could well be a major contribution to the capital expansion plans or operational needs of a local port or terminal on the inland waterways.  But these “small” ports and terminals are the gatekeepers of that larger system. A chain is only as strong as its weakest link. Meeting the needs of the ports and terminals on the inland waterways – however “small” they might appear to be when viewed individually – will have a highly leveraged effect in maintaining and enhancing the efficiency of our nation’s freight transportation system overall.

At least one inland waterways industry association with which I am familiar, Inland Rivers, Ports, and Terminals, Inc. (IRPT), is encouraging its members to contact their Congressional delegations to urge the introduction of a new standalone discretionary program dedicated to inland ports and terminal projects. However, this is an opportunity for all members of the inland waterways industry to call the attention of our lawmakers to this need.

We know that every elected representative values knowing what is important to his or her constituents. Grant amounts might be “small” in the context of an appropriations bill, but for an elected representative there is no vote that is too small. Many members of Congress provide for their constituents to communicate with them on their official websites, by email, or on social media.  If those whom we elect do not hear from us about this need, we have no one to blame but ourselves.

This article first appeared in the May 2019 print edition of MarineNews magazine. 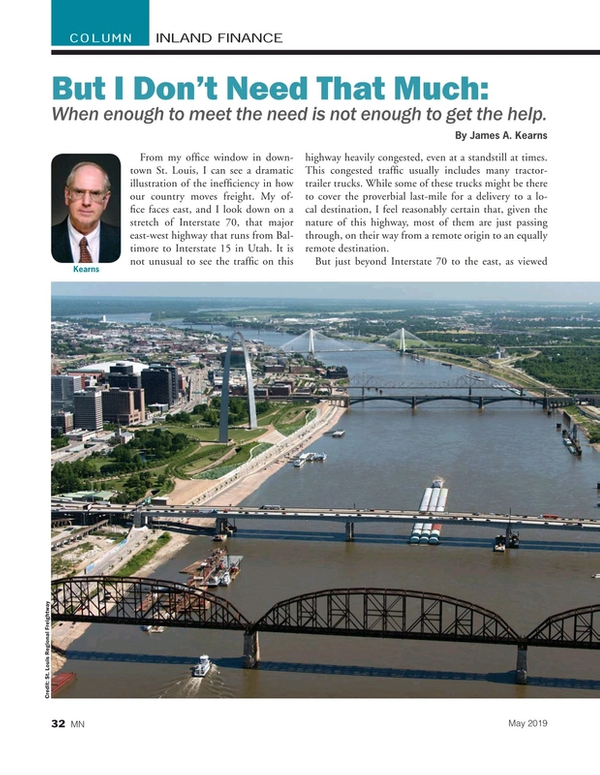 Read INLAND FINANCE: But I Don’t Need That Much in Pdf, Flash or Html5 edition of May 2019 Marine News