As Trace Laborde, Marine Manager for Laborde Products, said, “The OXE diesel is the complete package, a true diesel engine. It’s great for any maritime application that requires fuel efficiency, simple maintenance, compliance with all European and EPA Tier 3 regulations, and unmatched performance. There is no other choice than the OXE diesel.” That’s high praise, predictably coming from one of OXE’s authorized North American distributors, but in this case, the talk is matched by this OEM’s proven performance.
Separately, and in March 2016 Hurtigruten Cruises accepted their first order of 15 Cimco diesel outboard engines through Cimco’s Norwegian distributor Link Norge AS, for use in Antarctica, and they are still operating as promised. The reasons why are evident enough.

Developed, Compliant – and on the Market
The OXE was recently approved by the United States Environmental Protection Agency as the first and only Tier 3 diesel outboard for commercial use. This is important for all maritime agencies; local, state and federal who apply each year for the millions of dollars available for FEMA Non-Disaster Grants in the Port Security category. The OXE and its EPA Tier 3 emissions compliance will exceed all the criteria when apply for outboard grants.

“OXE is the first EPA approved CI diesel outboard on the market. We are excited to be at the forefront of developing new technologies and leading the global outboard market to new emission levels” says Christer Flodman, R&D Technical Manager at Cimco Marine. “That’s one small step for OXE, one giant leap for outboard emissions”

With diesel engines – also known as CI engines – the combustion of fuel takes place due to the heat generated by the compression of fuel and air inside the cylinder. CI means ‘compression ignition’ and is far safer than petroleum ignited by a spark plug, or any other spark.

Over the span of three years, Cimco Marine developed and matched the proven diesel power plant, the GM EURO 5 compliant engine. In marinizing this engine, mounting it horizontally and taking on the design plus manufacturing of a gearbox and foot they achieved the high torque this marinized diesel can produce, Laborde explained.

Along the way, adds Mr. Laborde, Cimco engineers moved the entire service components to the front of the engine so that when you lift the soundproof cowl, everything is easily accessible. CIMCO also designed a similar mounting pattern as a Yamaha 200hp outboard; the prop uses the same spline and shaft.

As Pim Polesie, the Chief Marketing Officer for Cimco, explained, “The approach was to take advantage of the automotive diesel engine’s inherent high performance, substantially increased life and substantially reduced operational cost and compliance with environmental laws and regulations and combine it into a more reliable drive train suitable for the commercial market.”

“OXE’s transmission drives a geared belt that turns the prop and allows for increased torque transfer to the propeller while it enables smaller torpedoes, and a slimmer submerged module. The gearbox and clutch system are continuously water-cooled which means that you can use the trolling function without time limit,” said Robert Karlssen, Cimco test pilot and technician.

The gear box makes it possible for the operator to change from left hand to right hand rotation on the propeller by simply opening it up and switching the two gears. This more sophisticated electro hydraulically operated gearbox is water-cooled for operation at load. It makes possible a gear ratio communicated through the throttle that operates like a trolling gear; together eliminating over heating while simplifying continued low speed operation.

The use of the Euro 5 diesel combined with the streamlined engine design reduces fuel consumption by up to 42 percent. The result is an outboard unit of similar size and dimensions to conventional two- or four-stroke petrol outboard for the same power output that is also compliant with the emission regulations established by the Environmental Protection Agency (EPA), European Union (EU) and the California Air Resources Board (CARB) and is certified by IMO Tier II, EPA Tier III and RCD, according to Cimco.
All that said; there are many other advantages born by the OXE.

Safety, Performance and TCO
“From a safety aspect for the commercial users it was thought desirable that OXE Diesel units allow for low engaging speed and trolling capability,” Mr. Polesie said. “Not only does it negate the need for carrying petrol – and therefore complying with the concomitant safety requirements – but also running costs, available range and service intervals are all improved.”

With low speed limits around many coastal areas and all ports, operating a ‘performance’ outboard for hours at trolling speeds that cannot exceed five knots is asking for trouble. The OXE is engineered for both long duration trolling speed and high performance.

“The OXE Diesel allows for trolling,” he continued. “When engaging Trolling Mode (TM) the full throttle range represents 20 percent of normal throttle range. This enables a higher resolution of the throttle maneuvering thus giving the operator a more precise control in demanding situations.”
Cimco cites comparative figures for fuel consumption at wide-open throttle of 43 l/h for the OXE Diesel 200hp outboard against 71 l/h and 73 l/h respectively for equivalent 200hp four-stroke and two-stroke petrol outboards. The net result is that for the same performance and tank size the OXE Diesel four-stroke offers 70 percent more range.

With roughly equivalent dimensions – albeit with a higher weight – the OXE Diesel 200hp should also offer broadly similar performance to the petrol equivalent. “We’ve got a twin installation on a 10 meter Cheetah cat,” says Jeremy Paul, general manager of Proteum and distributor for the UK, Ireland and Channel Islands. “That’s a heavy boat, but we’re getting around 30 knots. Cimco has demo boat in Sweden with a sleeker hull and a single engine that does around 45 knots.”

Proteum has been demonstrating to commercial operators the low total cost of ownership (TCO) of the OXE Diesel outboard in comparison to petrol equivalents. Based on in-service data, an operating scenario over 5 years shows OXE’s TCO to be, on average, £100,000 less than a petrol equivalent.

On the water, environmentally compliant and versatile enough to appeal to the needs of commercial, government, military and yacht sectors alike, the OXE outboard has something for everyone. 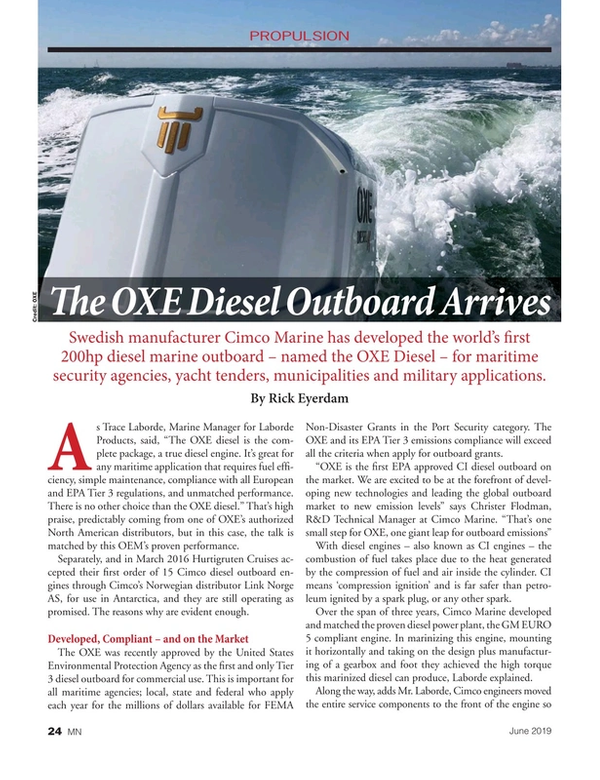