OP/ED: A Reassessment of the U.S. Marine Salvage Posture

It has been ten years since the U.S. Salvage and Marine Firefighting Regulations were published: Is it time for a reassessment of the U.S. marine salvage posture?

In 1982, the National Research Council’s Committee on the National Salvage Posture prepared a study entitled, “Marine Salvage in the United States.” The goal of the report was “to assess the present national posture for coping with ship rescue salvage and towing situations for time-critical offshore salvage in general.” The report recognized that any analysis of salvage should involve “those with financial interests in marine commerce – shipowners, operators, cargo owners, underwriters, and salvors themselves – and in addition the Federal Government as represented by the Navy, the Coast Guard and the Maritime Administration.”

In 1994, the National Research Council published “A Reassessment of the Marine Salvage Posture of the United States,” found “that the traditional salvage company, with dedicated vessels and personnel, was disappearing from the commercial salvage market due to high maintenance costs and fewer marine accidents.”

Based on these studies and other analyses, in 1997, the U.S. Coast Guard began hosting public workshops “to address issues related to salvage and marine firefighting response capabilities, including the 24-hour response requirement…” (Federal Register, Vol 73, No. 251, Dec 31, 2008).

Ten years after the publication of the tank vessel Salvage and Marine Firefighting regulations, a Coast Guard led “verification” program has reduced the number of salvage companies that can be recognized on Vessel Response Plans from hundreds to only four national services providers and a handful of regional service providers. Additionally, the regulatory contract requirements have changed the way salvors are compensated.

Historically, contracts required “an ample award” for salvors that risked lives and livelihoods to save a vessel; today, it is merely time and materials.
The Coast Guard’s verification program continues to become more stringent, to include tightening verification response times and increasing reporting requirements. In the evolution of this verification program, the Coast Guard is now requesting to review and critique contracts between service providers and subcontractors – that had previously been accepted by the Coast Guard. As a result, it appears the “planning standards” in the regulations, now also published in the Coast Guard’s Incident Management Handbook, are becoming response expectations by interpretation without a regulatory basis. These “interpretations” are well beyond that envisioned when the regulations were published. Simultaneously, the Coast Guard’s recent interpretations of Subchapter M and merchant mariner credentialing requirements have potentially negatively impacted the US response framework and capabilities.

Despite American Salvage Association (ASA) members consistently meeting the SMFF regulatory requirements, entities such as the Rapid Ocean Response Corporation (RORC), a private equity group whose sole asset is a small fire boat funded by a governmental grant, criticize both the salvage industry and the Coast Guard’s oversight. As this was a topic of a Congressional Hearing and RORC has since funded a document on marine firefighting focused on two ports, it is the ASA membership’s understanding that RORC’s business plan is to offer solely marine firefighting services as an Alternative Planning Criteria Administrator, exempt from the SMFF regulations and the salvor selection criteria under 33 CFR 155.4050 that ASA members are required to meet to the maximum extent possible.

Even if the regulations were applied to RORC, the corporation might meet but a few of the regulatory selection criteria listed in 33 CFR 155.4050 or suite of salvage services outlined in 33 CFR 155.4030(b). As all companies and entities should be treated fairly by regulatory authorities, we have asked that all companies, including RORC, be evaluated by the same standards as our members and that, if the Coast Guard desires to place firefighting stations in each port, that this be codified in regulations with due process to permit a fair playing field for all potential service providers as opposed to creating what is perceived by our members as a monopoly for a single entity.

Regarding the issue of marine firefighting, firefighting itself has historically been a “public good.” As such, from a business perspective, marine firefighting is not a profitable or sustainable venture. For example, to meet the regulatory standards ASA companies have pre-positioned marine firefighting equipment around the US and Captain of the Port Cities outside the continental U.S. This equipment is rarely used and will not pay for itself. As noted in the 1994 assessment, the financial losses are only covered, if at all, by including the equipment in an overall suite of salvage services. If the Coast Guard decides to grant RORC their requested APC Administrator position, it is envisioned that ASA members, no longer required to meet the marine firefighting component of the services required by regulations that will be addressed by an APC, will quickly move their equipment outside the US where there is still an award for salvage operations in contrast to the time and materials contracts generally found in the U.S. since the implementation of the regulations. This will potentially have third-order effects of reducing national marine firefighting services with the loss of both equipment and qualified, seasoned response personnel. Additionally, if the Coast Guard should determine that marine firefighting services require dedicated assets in contrast to vessels of opportunity currently accepted by the regulations, it can be argued and logically follows that other services should also require dedicated assets, such as diving, emergency lightering, heavy lift and emergency towage. The United Kingdom, for example, publicly funds dedicated salvage tugs.

While it can be argued that the US government or the shipping industry should fund both dedicated fire houses in every port with standby salvage tugs and ready crews, in the end, we believe these are public policy decisions that will require supplemental legislation to implement. Considering an assessment of the salvage industry has not been published since 1994, we believe a reassessment is needed to review the state of the industry to make informed decisions by all stakeholders. Otherwise, the Coast Guard, while well intentioned, may ultimately reduce the salvage capacity of the nation through misguided regulatory interpretations and political pressure.

Jim Elliott is President of the American Salvage Association and Chief Operating Officer of the Teichman Group of Companies, including T&T Salvage and T&T Subsea. With three decades of leadership experience in maritime operations, he has served as a senior Coast Guard Officer, Incident Commander, Salvage Master, Commercial Diver and Project Manager on salvage and oil spill response operations from the Equator to the Arctic.  Jim holds a Bachelor of Science in Environment Management with distinction, a Master of Environmental Policy with honors, Master of Arts in National Security and Strategic Studies with highest distinction from the U.S. Naval War College and a MBA with merit from the University of London. Additionally, he has earned over 75 Coast Guard, State and industry awards and medals, including the Coast Guard’s prestigious Inspirational Leadership Award. 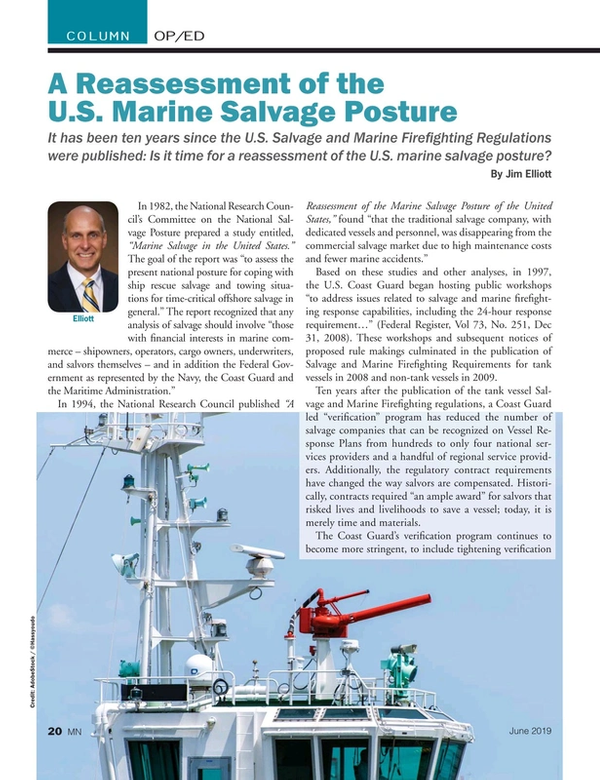 Read OP/ED: A Reassessment of the U.S. Marine Salvage Posture in Pdf, Flash or Html5 edition of June 2019 Marine News