Set to Soar, Taking Offshore Support Industry With it.

Offshore energy development is opening a new front in the United States -- the Atlantic seaboard, with strong winds, a shallow continental shelf and a proximity to dense population centers is driving strong interest in offshore wind development. The offshore oil and gas supply chain stands to benefit in a big way from billions in coming investment.  In fact, it is already playing a role.

While a landmark project, the five turbine, 30 MW BIWF is small compared to the much larger commercial scale projects that are on the horizon. Today, offshore wind projects totaling 3,110 MW of capacity are contracted to provide electricity in Rhode Island, Massachusetts, Connecticut, New York, New Jersey, Maryland and Virginia. Additional offshore wind power contracts are expected to be signed in New York and Maine in 2019, bringing to eight the total number of states to which offshore wind power will soon be providing electricity.

To date, the Bureau of Ocean Energy Management (BOEM) has issued 15 active offshore wind leases that have generated $473 million to the U.S. Treasury. Much of that revenue -- $405 million-- resulted from the December 2018 sale of three wind leases offshore Massachusetts. This record setting sale demonstrates the potential for huge amounts of revenue to the government from future offshore wind lease sales.

The promise of this new American energy industry is tremendous. Offshore wind is poised to make significant job, manufacturing, and infrastructure contributions not only along the Gulf Coast and other coastal states but also throughout the country. Significant investments are already being made to improve port infrastructure, train workers, construct crew vessels, and develop supply chains.

In a recent white paper, the University of Delaware’s Special Initiative on Offshore Wind (SIOW) estimates that America's growing offshore wind power industry – projected to generate 18.6 GW of clean, cost-effective power in seven states on the Atlantic Seaboard by 2030 – presents a nearly $70 billion CAPEX revenue opportunity to businesses in the offshore energy supply chain. The report identifies significant opportunities for companies that will build, supply and support the U.S. offshore wind sector, including the need to procure, fabricate and install 1,700 wind turbine generators, 1,750 subsea foundations, 45 offshore substations, 16 onshore substations and approximately 5,000 miles of cable. While this capital investment alone is massive, the operations and maintenance needs will also be substantial, driving their own supply chain demands and opportunities.

The stage is set for offshore wind to boom off our Atlantic coast, and with BOEM working to start the process in the Pacific, developers and companies in the offshore energy supply chain need to get ready to build.  To that end, the National Ocean Industries Association (NOIA) and the Offshore Marine Service Association (OMSA) are jointly hosting an offshore wind summit in New Orleans on September 19th to further our industry’s understanding of the emerging U.S. offshore wind market and the opportunities it presents. Details of the NOIA-OMSA Offshore Wind Summit: Advancing U.S. Vessel Opportunities in the Emerging Offshore Wind Sector are available at www.offshoremarine.org.

While competition from established supply chain providers in Europe will be significant, keep in mind that offshore wind is not just an American or European industry. Interest in offshore wind is growing globally, and companies that engage in this space domestically will have the tools to compete as Asia, Africa, the Middle East and others look to this affordable energy resource as a key to the future.

The U.S. offshore oil and gas supply chain is full of companies that have experienced ups and downs and jumped into new industry opportunities (think deepwater) with both feet fighting for domestic and global market share. Offshore wind offers a similar dynamic; it is a win-win opportunity for all involved. Wind companies get the unrivaled expertise and skill of companies operating offshore in the Gulf of Mexico, and in turn, service companies tap a new revenue stream, learn a new industry, and can export their expertise globally in the future, driving growth and opportunity worldwide.

Offshore wind has arrived in the U.S. and is set to soar; those who grab it today will be positioned to take flight.

Nicolette Nye is Vice President of Communications and Member Development of the National Ocean Industries Association (NOIA) in Washington, DC. She staffs NOIA’s Offshore Renewables Committee. She joined the staff of NOIA in 2008, after nearly a decade at the Department of the Interior’s Minerals Management Service (MMS). A retired Navy Chief Petty Officer, Nicolette served her final two military tours in Hawaii, where she was Senior Journalist for the Commander in Chief, U.S. Pacific Command and Force Journalist for the Commander Submarine Force Pacific. She served two tours in Japan as a broadcast journalist at the Far East Network in both Misawa and Yokota. Nicolette serves on The National Oceanic and Atmospheric Administration (NOAA) Ocean Energy Advisory Board (OEAB). 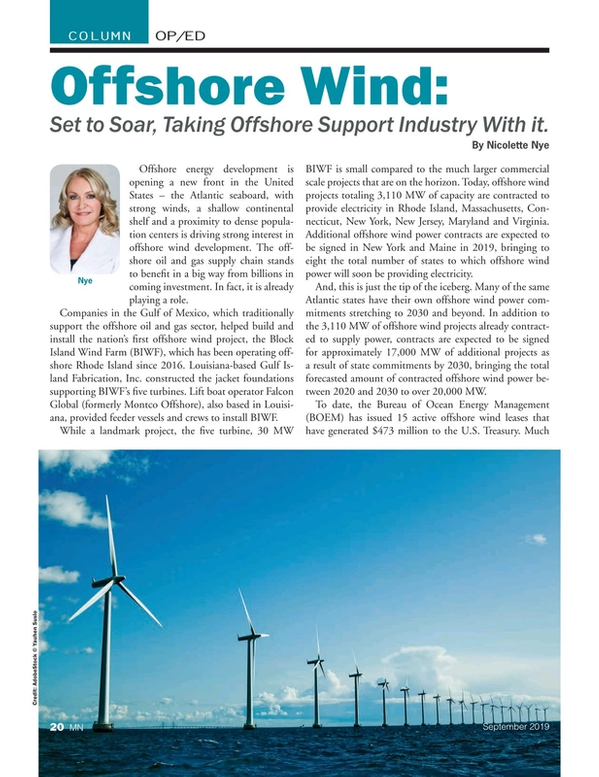