PROPULSION: LNG as a Fuel

Some forecasts expect 10% of the global fleet to be powered by LNG by 2030, a proportion that could rise to just under a quarter of the fleet by 2050. Will your vessels be among them?

The year-end sulfur cap on marine fuels and recent industry commitments to reduce its collective carbon footprint are behind a surge of interest in LNG as fuel; widespread adoption, however, still faces strong headwinds on several fronts.

After a period where the costs of transitioning to LNG as fuel – at the operational and capital expenditure (Capex) levels – had appeared to constrain demand, the IMO’s recent commitments to reduce the greenhouse gas (GHG)-related emissions from international shipping has rekindled industry interest.

The vast majority of the vessels that are able to use LNG as fuel are LNG carriers, but the last few years has seen other vessel segments opt for the lower carbon alternative. That said, the number of vessels remains a comparatively small portion of the global fleet; fewer than 700 ships currently use LNG as fuel, a number that will grow to about 1,000 when the current order book is delivered.

Drivers
The pace at which new fuels (beyond heavy fuel oil [HFO] or marine gas oil [MGO]) are being adopted is primarily driven by two core factors: regulation and economics.

On the regulatory front, the IMO’s decision to cap the sulfur in marine fuels at 0.5% (lower in environmental control areas [ECA]) from the end of the year and set firm medium-term and long term GHG emission-reduction targets has created a foundation for investment decisions.
LNG is the cleanest-burning fossil fuel currently available at scale; its use as a marine fuel is supported by an emerging network of infrastructure and advanced engine technologies that have been proven in practice.

As such, with the sulfur cap looming at the end of the year and the IMO’s GHG strategy, it is seen as a primary option for ships involved in international trade. Some forecasts expect 10% of the global fleet to be powered by LNG by 2030, a proportion that could rise to just under a quarter of the fleet by 2050.

The LNG Debate
As a fuel, it reduces nitrogen oxide emissions, eliminates most sulfur oxides (SOx) and particulate matter, and contributes to reducing carbon dioxide (CO2) when used in place of traditional marine fuels. At the same time, the question of just how much using LNG as a marine fuel reduces CO2 when compared with HFO is a matter of growing debate. Some studies estimate LNG’s lifecycle (commonly referred to as ‘well-to-wake’) CO2-reduction potential to be as high as 21% when compared to HFO.

Other analyses have estimated its potential to reduce shipping’s CO2 output to be far less. These studies take different perspectives on the production processes, transportation, combustion cycles and measuring points, and deliver results that are not supportive to LNG.

Because using LNG as a marine fuel can eliminate most SOx that would be produced by fuels such as HFO, the IMO’s 2012 announcement of the 2020 sulfur cap compelled some owners to investigate its potential to support compliance.

That interest waned for a period when the price of fuel oils dropped. The delta between fuel oils (and their cap-compliant distillates) and LNG – in addition to the comparative installation costs of LNG propulsion technology vs. scrubbers – temporarily created an unfavorable commercial environment.

However, the IMO’s decision last year to set firm GHG targets for 2030 (at least a 40% reduction per cargo tonne/mile against 2008 levels) and 2050 (50% less GHG output) created the regulatory foundation for longer term investment strategies and rekindled earlier momentum.
The cost of adopting LNG as fuel has been an early barrier to adoption, particularly when regulation remained uncertain; it is estimated that the initial investment cost of using LNG- fuelled propulsion has been 1.25 to 1.4 times higher than conventionally fueled vessels. In particular, this variable has put a damper on demand for retrofits.

LNG: anything but ‘hot air’
ABS, the leading class for gas ships, is supporting industry efforts to improve systems installation and generate new ship designs to help make the adoption of LNG as fuel a more sustainable proposal for owners. It stands to reason that if the cost of LNG fuel remains lower than conventional options, the operating costs will be competitive as well.

Just how big an influence capital costs and regulation had on the pace of development for landside infrastructure to supply LNG-propelled ships is unclear; but it is safe to say that the development of infrastructure and assets -- ashore and at sea – to support the use of LNG as fuel has proven slower than many forecasts.

What is known is that Europe has taken the lead in developing bunkering infrastructure, supported by EU policy that requires at least one LNG bunkering port in each member state. About 10% of European coastal and inland ports ultimately will be included in that continental network, which will span 139 ports. Assuming all goes to plan, EU coastal port LNG infrastructure is to be completed by 2020 and by 2025 for inland ports.
In the U.S., the Energy Information Administration (EIA) expects the use of LNG in national marine bunkering to be limited in the next five years, citing the limited present infrastructure for LNG bunkering at U.S. ports and the high initial development cost. As the infrastructure matures, the EIA expects LNG to capture 7% of national bunkering activities by in 2030 and 10% by 2050. These expectations could rise as the U.S.’s transition to a gas-rich economy gathers pace.

Certainly, small-scale LNG supply is one of the important challenges facing would-be adopters; in fact, it is a current constraint. There are regions where bunker facilities are nonexistent, making LNG as fuel a riskier choice for some vessel segments.

In some respects, it is the classic ‘chicken or the egg’ dilemma: investment decisions for vessels are being delayed until the supporting landside infrastructure matures, while LNG suppliers are waiting for demand to mature before they build the required infrastructure to serve shipping. The industry and its suppliers have spent the past decade preparing the infrastructure to serve LNG’s rise as a fuel for marine use. Yet that network presently serves less than 1% of the global fleet above 500GT.

Looking Ahead
In the short-term, the pending sulphur cap is the driving force behind the recent surge in interest in LNG as fuel, but the IMO’s emissions targets also may be having an influence, which can be expected to grow. Organizations that provide technical support for the associated technologies and systems, such as ABS, are seeing surging demand for everything from feasibility studies and technology qualification to design approvals and HAZOP and HAZID workshops.

The creation of ECAs for shipping is also playing a role. When a ship operates solely within an emission-regulated area it creates a friendlier investment profile for building the capacity to run on low-emission fuels; as we move towards 2030 and 2050, this point is expected to have a more global context.

There is a school of thought that the 2030 emissions targets can be achieved through a combination of new operational and technical measures. Lower-sulfur fuels such as LNG will have a role to play, as will measures such as those that optimize transit speeds, a transition to data-driven just-in-time delivery and enhanced hull and propeller designs.

With internationally trading ships destined to travel in and out of multiple ECAs and national jurisdictions, building in fuel flexibility is also emerging as an important strategy on some sectors, a fact that could boost the prospects for LNG as fuel.

Regardless of how stakeholders view LNG’s emissions-reduction capacity and its potential to contribute to meeting the IMO’s targets for 2030, one point is becoming increasingly clear: the 2050 goals cannot be met using the fuels and technology available to shipping today. This will take innovation and an industry environment that rewards first-movers.

In the interim, given that the technology and supply networks supporting LNG are the most mature of the alternative fuels, it is expected to be a prominent contributor to the industry’s decarbonization efforts. 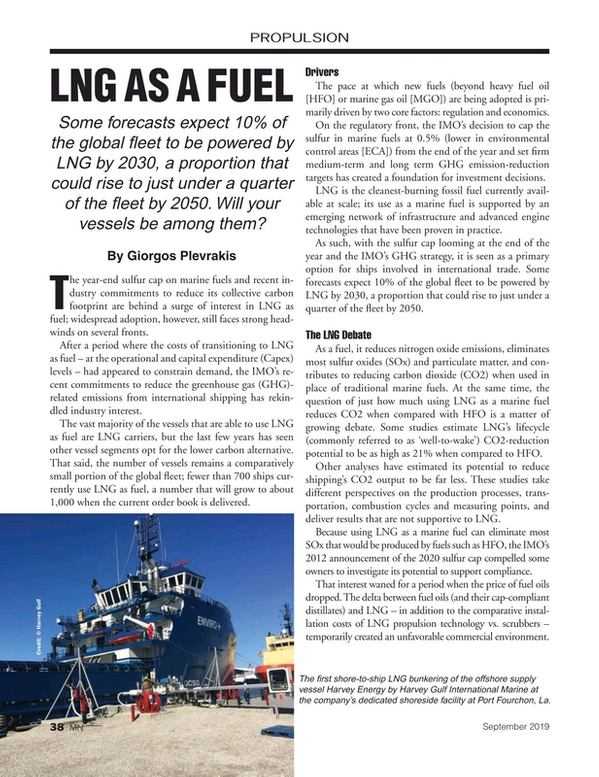 Read PROPULSION: LNG as a Fuel in Pdf, Flash or Html5 edition of September 2019 Marine News