Dynamic Positioning has been around for a while, it is evolving and it is here to stay. Here to sort it all out are two of industry’s more familiar stakeholders who also explain what might come next.

When it comes to critical offshore operations and vessel handling, this is not your grandfather’s marine industry, and it hasn’t been for some time. That’s because the bridge layout and equipment commonly found on any recently delivered offshore service vessel would be unfamiliar to the typical deck officer of just 20 years ago. Much of that can be attributed to the advent of dynamic positioning equipment systems.

DP – perhaps like no other skill at sea – has changed the role of the deck officer. The technical requirements to qualify and operate this equipment are vast. And yet, Ben Todd, Vice President and COO of Beier Integrated Systems, a major stakeholder in the DP equipment markets, discounts the impact, saying, “I don’t believe DP technology was disruptive at all. The companies that embraced the technology, properly outfitted the vessels and adequately trained the crews increased safety, gained efficiency and performed offshore operations that were not possible prior to DP.”

Dave Johnson, Product Development Director of GE’s Power Conversion business, puts it a different way. “It is fair to say DP was a disruptive technology when introduced. It changed the game for two ships when working in close proximity. Now DP is the indispensable technology for offshore operations.”

Both Beier Integrated Systems, LLC and GE’s Power Conversion business own and operate U.S. Gulf Coast-based training facilities that specifically target dynamic positioning skills. The Marine Training Institute (TMTI) located in Gray, LA is owned by Beier Radio Company. Among other navigation specific courses, the school offers Nautical Institute Basic and Advance, and OSVDPA (Phase 1, Phase 3 Courses and Assessments) for dynamic positioning. Almost 1,500 mariners have passed through this school since 2014, many of them, repeat customers.

GE’s Marine training school in Houston provides training on all aspects of diesel electric propulsion systems and Dynamic Positioning systems. GE dedicates classrooms to Dynamic Positioning Systems Basic Induction Training (where new DP candidates are introduced to the concepts of DP), DP Advanced Simulation (where experienced DP operators are tested and given final DP certification) and a program dedicated to DP Sea time reduction. According to GE, students utilizing their full bridge simulator can reduce the requirement for DP hours at sea by undergoing advanced simulation scenarios, exposing the operators to a wide range of experiences and equipment failure scenarios.

Both schools provide training that complies with both the Nautical Institute and the newer Offshore Service Vessel Dynamic Positioning Authority (OSVDPA) requirements.

TMTI uses the latest state-of-the-art DP equipment; in this case, the Beier ICVS 4000 DP System. Similarly, GE’s facility was designed from the ground up to use the latest generations of GE Dynamic Positioning equipment, as well as its C series automation and propulsion drive technologies. Here, like at TMTI, students can get ‘hands on’ experience with the actual equipment they will encounter on ships.

The DP credentialing process is very straight forward in all the schemes, with each posting the process on their respective websites. There are some differences between OSVDPA, NI and DNV, but any USCG credentialed mariner can start the process by taking an OSVDPA Phase one Induction course, or NI induction course. Under both the Nautical Institute and OSVDPA certification schemes, certificates expire after 5 years. And, they both require actual time on DP vessels, utilizing the DP system in order to revalidate their certificates. In order to maintain a DP operator’s license, the operator must continue to work a number of hours per year at the DP desk to maintain familiarity. These hours can also be accumulated on a Class A Full mission simulator. GE’s Johnson adds, “After a long lull in activity we are now seeing the uptick in demand for experienced DP operators with associated increased throughput in our training school.”

A DP operator who certifies on one OEM’s equipment can legally operate on another. The equipment manufacturer is not part of the certification process. The “buttonology” from one system manufacturer to the other is different but the function of the systems is essentially the same. Ben Todd explains, “The DP training schools provide operator training to the students. This includes DP operation planning, risk assessing, communications, use of decision support tools (ASOGs, CAM/TAM), manual control of vessels and structured practical experience. It is not system, manufacturer or vessel specific. There is no way for a school to train on every system configuration or vessel configuration. The vessel and system specific training is performed on the vessel the DPO is assigned to by the crew or the vessel owner’s representative.”

GE’s Dave Johnson also weighed in, explaining, “Although the training here is carried out on GE’s DP system, what we are really training people in, is the safe and efficient operation of DP systems and vessels. We do, however, also provide training courses aimed at people transitioning from other DP to GE DP systems. These are simple familiarization courses that assume the operator understands the underlying principles of Dynamic Positioning and focuses on efficient operation of our systems.”

Nevertheless, cautions Johnson, “We would always recommend that an operator becomes familiar with the latest equipment he is operating. Often in normal operation the transition to a new system appears very straight forward, but a DP operator must be able to smartly assess and act in failure conditions. As such, we recommend all people new to using our systems to attend the training class.”

DP: software, and hardware, too
Beier boasts as many as 650 DP systems in use  worldwide. GE has, since the 1970’s, built more than 950 systems. Beier has been distributing, manufacturing and supporting DP and DP-related equipment for a similar period of time. Both list many of the recognizable offshore stakeholders as repeat clients; Hornbeck Offshore and Logitel Offshore, to name just a couple.

Beyond the requirement for mariners to be qualified for DP operations by a recognized authority, the same can hold true for the vessels, as well. For example, some vessels are “certified for DP” and others are not. Typically, these determinations are made by the ship owner as an early part of vessel development. Some vessels do not have a formal need for DP, yet equipped with one for the convenience of operation. DP class notification is provided by the classification societies such as ABS, LRS or DNV.  Jonson adds, “Primarily it is the vessel end user – or charterer – who dictates what type of vessel they need and whether there is a requirement for a certain DP class.”

At the same time, the terms ‘DP1’ and ‘DP2’ (redundancy) are frequently bantered about – especially by operators trying to boast about their tonnage and its safety. Moving from DP class 1 to 2 and 3, the DP and most significantly the ships propulsion systems are configured with a higher level of redundancy, meaning the system can safely operate through more levels of supporting equipment failure. Higher class DP systems are attractive to charterers. They greatly reduce the risk of an equipment failure resulting in the ship having to return to the shore for repairs.

Changes in the Wind
DP has been described as a ‘mature technology.’ With that maturity, the pricing to outfit vessels with DP has come down appreciably. And, says Beier’s Todd, “The software is mature but advancements in hardware and sensor technology continues to evolve; therefore R&D continues.” GE’s Johnson agrees, adding, “It has never been so cost-effective to outfit a vessel with a DP system.”

GE’s DP equipment has a long history with proven reliability. Its latest ‘SeaStream’ DP technology involves an operator interface that was totally revised form the ground up, producing the latest in state-of-the-art intuitive operator interfaces. “The interface is highly suited to the latest generation of mariners who expect interfaces to be as simple and intuitive as those found on modern consumer electronics such as iPhones,” adds Johnson.

DP: Critically Important Now, and in the future
Since its inception, DP has always been important when it comes to offshore oil and gas work; in good times and bad. As the offshore wind boom finally looks to be taking off in the United States, DP operations will take on an increasingly important role, especially if the Jones Act creates a market for ‘repurped’ OSV tonnage to satisfy domestic offshore wind requirements. Underscoring that reality, Ben Todd explains, “DP will be just as important to the offshore wind market as it is to offshore oil and gas. Both need a stable, well positioned vessel to provide equipment, support, maintenance and supplies to the offshore structures.”

All that said; any type of offshore operation that needs precision maneuvering and stable positioning will benefit from DP. For example, GE’s DP system was recently chosen by Shanghai Salvage Bureau for its deep-water dive support vessel (DSV). Separately, dive vessels, fishing vessels, cruise ships, heavy lift vessels, autonomous vessels and military vessels are just a few examples of vessels that benefit from DP. As DP technology evolves, sensor technology is allowing DP systems the capability to do things they  couldn’t, just 10 short years ago. Todd adds, “As this technology continues to develop, it will open new opportunities for DP in other market sectors.”

As DP systems evolve further, more efficient operations via simpler operator interfaces will produce ‘greener’ operating modes that help reduce fuel consumption and emissions. After all, anything that contributes to reducing any vessel’s carbon footprint is becoming increasing important.
Providing a glimpse of what comes next, GE’s Johnson predicts, “There is a growing demand for more and eventually fully autonomous vessels. DP systems provide a more precise way to control a vessel’s systems, whereas the guiding inputs to the DP may come for advanced AI systems rather than operators.” No one will be surprised if he is right. 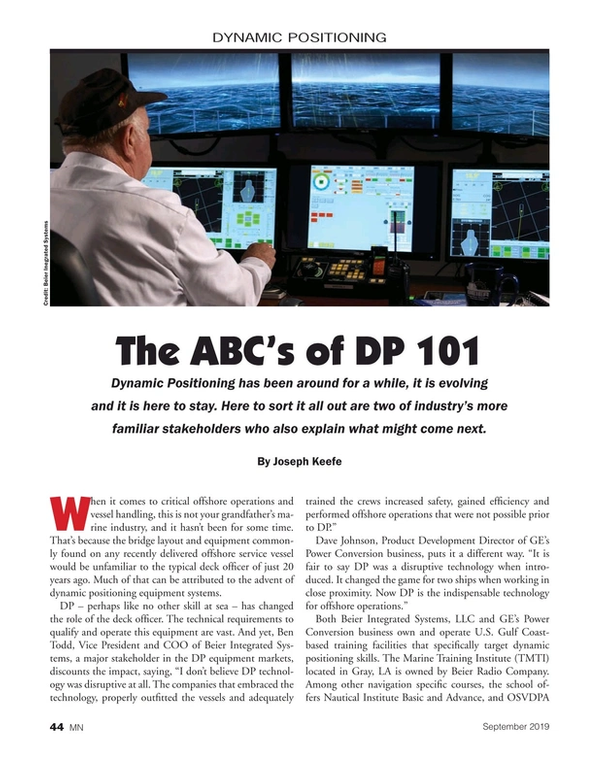