MarineNews recently visited the Blount Boats facility in Warren, Rhode Island. While the year 2019 might be the ‘year of the woman’ in the eyes of the International Maritime Organization, the two women at the head of Blount Boats – Marcia & Julie Blount– have been a driving force in the U.S. boatbuilding market for decades. As Blount’s celebrates its 70th anniversary, read about the storied yard’s promising future.

Founded in 1949, Blount Boats is a full-service with a customer base comprised of a variety of commercial and government entities including the U.S. Coast Guard, U.S. Army, and private and public vessel operators. Since its founding in 1949 by Luther Blount the company has designed, built and repaired hundreds of aluminum and steel vessels – up to 220 ft. in length – and today the company remains privately held and managed by Luther’s daughters, Marcia and Julie Blount.

From its first boat built – a 77-ft. steel catamaran – to the variety of ferries, offshore wind support boats and icebreaking tugboats being built today, Blount has progressively grown its capabilities and sought to squeeze the most out of its six-acre.

One of the most famous vessels built at the shipyard was a 130-ft., 600-passenger ferry boat. Built in 1952, this boat carried more than 60 million passengers from Manhattan to the Statue of Liberty for the Circle Line.

More recently, the construction and delivery of Atlantic Pioneer, the first U.S. Flagged crew transfer vessel for the Block Island Wind Farm. The boat is significant not only in being a ‘first’, but perhaps more importantly is signifies the boatyard’s future as Marcia Blount, President of Blount Boats since 2007, said, when assessing future opportunities, that they are “blowing in the wind” as the offshore wind farm business continues to build in the Northeast U.S. Atlantic Ocean region. “This market has been off to a slow start but leases have been purchased and should develop into a robust market for a variety of vessels,” said Blount.

70 Years Later …
While 2019 has been an uneven year for many in the maritime industry, it has been “excellent” for Blount Boats according to Marcia Blount, premised on a healthy order book including four vessels being built during the 2019-2020 years, and a number of shipyard improvement projects currently underway, all designed to ensure the boatyard stays busy for years to come.

“Blount has contracts for four newbuilds which will be delivered in 2019 and 2020,” said Marcia Blount. Delivered in May 2019 was the Governors 1 built for The Trust for Governors Island, a 132 x 40-ft. double-ended ferry that began service on June 15, 2019, and will serve 400 passengers per trip between lower Manhattan and Governor’s Island.

When MarineNews visited the yard in September, Blount was working another pair of vessels, including a 101 x 40-ft. steel double-ended passenger/vehicle ferry for Shelter Island, NY. To be named Southern Cross, it marks the third vessel built for South Ferry.

In addition, the shipyard is building a 56-foot ice-breaking, all-welded-steel, diesel powered, double crew tugboat to be named Breaker II for the New York Power Authority (NYPA). While small in size the boat is mighty in capability, “a little hulk” in Julie Blount’s estimation, primarily tasked to tow an ice boom on the Niagara River to break ice floes before they go over the falls and pose a threat to NYPA’s hydro power facilities. Designed by Bristol Harbor Group, the boat is significant as it is the first tugboat built by the boatyard in recent memory, and a specialized icebreaking unit at that, which required some complex maneuvers for the yard in the shaping of the ¾ inch plate for the bow section.

Investing for the Future
While any shipyard requires continual investment, Blount Boats has been particularly steady and progressive in this regard, touting the effectiveness of small shipyard grants from the U.S. Maritime Administration in helping it fund everything from new machinery to larger capital improvements, including a plan to expand and modernize its current facilities to include more building space under cover, and the addition of a marine travel lift to enable it to earn more vessel repair work.

“When the MARAD grants become available we always ask our foremen for their technical and equipment ‘wish list,’ covering equipment large and small to help the yard become more efficient,” said Marcia Blount. The most recent round of grants, coupled with the nascent offshore wind industry and the potential large demand for new boat construction and repair, caused the Blounts to step back and evaluate how to best utilize their six acres. “Simply put, we asked ourselves how can we maximize our space to build and repair more boats.”

“In years past you could build steel boats outside, and the ways was never covered,” said Marcia Blount. “But for the new aluminum vessels (i.e. offshore wind farm vessels) we really need covered space. Our future is offshore wind and offshore wind farm support vessels, and we hope to be building and repairing many vessels in the future for the offshore wind sites.” 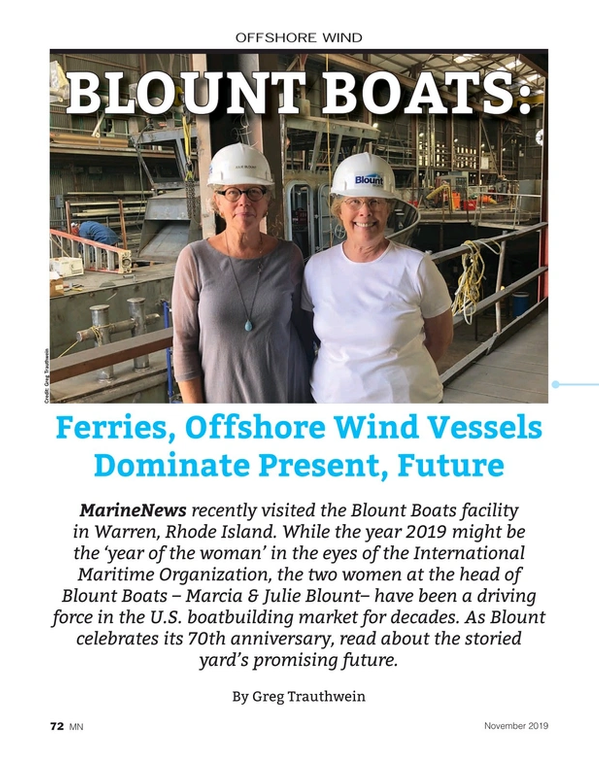