One Year In: Industry SME (Captain) Pat Folan weighs in from the front lines.

It has been an interesting year for towing industry. As the new Subchapter M towboat rule rolled out, it didn’t take long to discover that the regulation wasn’t perfect. As stakeholders look ahead to what comes next, it is also helpful to take a look back at what went right, what didn’t, and more importantly – why.

The U.S. Coast Guard
The US Coast Guard does not have the manpower to add more than 5,000 vessels to its workload. Compounding this reality, various sectors are advocating for the ‘USCG Option.’ One East Coast sector sent people to industry days and the message was that towing vessel operators did not need anyone beyond the Coast Guard to get them through SubM. Then transfer season hit and six vessels that we had up for a COI in June still have not even been contacted. Across the country, another 48 vessels were up for COI in year one, and only 26 have been through the process.
When we began the COI application process for our customers, one sector asked us for so much information that the packet had to be broken into 15 parts to be e-mailed. We eventually got the submission size down, but it is still a lot of information for a TSMS submission.

In practice, Coast Guard inspectors have routinely questioned everything that Third Party Organizations (TPO) did in their audits. If there is a system in place to use third party organizations, then the USCG should trust the TPOs – especially if they do not have the manpower to do the job. Are the IACS classification societies performing blue water COI’s and TVE’s being scrutinized to the same degree? If not, why not?

Variations of our Towing Safety Management Systems (TSMS) have been through 29 TPO audits in the past year with three different TPOs and multiple auditors. It’s also true that new Ensigns have to learn somewhere, but a better way might be to spend some time on a boat and not e-mail TPO’s repeatedly for obscure and sometimes inane information.

Why would the USCG schedule the ‘COI drop dead’ date in their transfer season? If all inspectors were equal, it would still be a big learning curve for the incoming people to get up to speed on towing vessel COIs. But, all inspectors are not equal. Some delays can certainly be attributed to the dedicated U.S. Guard men and women trying to learn not only their new jobs, but also a new industry. Those delays will have a huge ripple effect. If only 16% of towing vessels have COI’s three months after the due date, what happens as this year rolls along?

Probably the most frustrating part of this process is the inconsistency from Coast Guard districts and even sector to sector within districts. A common lament is that although Coast Guard regulators may not have to completely understand the businesses of those that they regulate, they should at least try. After being told repeatedly that I didn’t understand the sea conditions off New England and the effects on towing vessels, I gave up trying to explain that I ran tugs (and owned one) for decades on the New England coastline. Industry’s input doesn’t seem to matter. In one case, we had to argue why the doubler was under a stern roller and why it needed to be there. If an aluminum paint locker meets everything in an MSIB from one sector, then why is it completely unacceptable in another sector within the same district?

The USCG issued CVC-FM-004(2) to capture data from towing vessels. But one sector decided they would create their own and it includes nuclear, sail and oar powered propulsion. They refused to accept the Vessel Particulars Form. To this end, and in three different sectors, inspectors have come aboard with blank sheets of paper and then, they wing it. Don’t ask the operators to use TugSafe and then not use it to inspect the vessels.
The Coast Guard’s Towing Vessel National Center of Expertise (TVNCOE) has evolved into to be a good resource but unfortunately, they don’t have any real power. They defer to the OCMIs, who are typically not experts in the areas that they work. They transfer around too much to be experts.

The interpretation of Manning requirements has been another headache. For example, three almost identical tugs, operating in three different districts, all want Oceans International certification. District Z mandates 10 men, District Y, 8 men and District X says 4 men. Up until the COI, all were operating with 4 men safely. Some districts say two men per 12-hour watch for Lakes Bays and Sounds, but some want three. To be sure, there is a manning table in the Marine Safety Manual, but once again, the OCMI gets to interpret it.

THE TPOs
Just like industry and the U.S. Coast Guard itself, the TPOs have grown a lot. And it hasn’t been easy.  What they thought would be acceptable formats for receiving and sending information to the USCG, turned out to be wrong. Like the USCG, the TPOs are trying to be black and white in a grey Sub M world. It’s a shame the USCG hasn’t turned out to be a better partner.

We have worked with four of the TPOs and have had favorable experiences with each. The range of auditor experiences has been good and the underlying sentiment of helping companies comply while being objective is a breath of fresh air, as compared to the Coast Guard option.

Industry
The biggest surprise (for me) has been the number of companies that were not aware of SubM or thought it didn’t apply to them. Subchapter M has been in every industry publication for a decade. Yet we still find companies that haven’t even contacted the Coast Guard about their COI.
A big problem with industry is their fear of the Coast Guard. Even when the owner is on solid ground, they won’t push back. In private, they all understand that the Coast Guard works for us all, funded by tax dollars. The reality for small operators is that Coast Guard inspectors can and will shut them down.

In more than one case, no rails on the sides of the main deck house have resulted in 835’s. The boats have bulwarks. We were told that [144.810] required the installation of rails. True; it does – but only for vessels in oceans or coastwise service. Rather than allow us to push back, the operators installed the rails because they felt if you prove your point, the inspector will just find something else that is probably more expensive to install. The rails are a good idea, but should not be at the discretion of the inspector.

To be fair, we have a few operators that are not really living the TSMS and they look at the Health and Safety Plan as something that they trot out for the inspection. No matter which option that you use, you must understand and work to continually improve your system and your company. This is not just a management issue. Towboat captains have improved, but the revolving door for deckhands in the industry will continue to present challenges. One problem is wages. Industry needs to sell this as a career and get the people to take pride in what they do. In reality, that is a far bigger societal issue that can’t be covered here.

Many companies have rolled the dice and decided to wait until the Coast Guard shuts them down rather than spend the money ahead of time to comply. That’s not the Coast Guard’s fault. It’s also not their fault if an operator decides to run substandard equipment with substandard employees. The Coast Guard has a job to do and although I am frustrated with their performance in certain areas, overall, they are trying very hard to get it right. They are undermanned, underfunded and immediately the attention of your ire. I would not want to do their job for even a day.

Subchapter M was created to enhance and improve mariner safety. Most stakeholders don’t like forms and training. Most boat captains just want to run the boat. What they share in common is that they all want to go home safely at the end of each work period. On board, it means learning the TSMS/Health & Safety Plan and then, to become better, safer mariners. For the office, learn that the mariner’s safety is your responsibility. Finally and possibly most importantly, learn to get along with each other. We must build trust and that means listening. We can all learn something from each other.

Lobbying (for change)
The Towing Safety Advisory Council (TSAC) – a committee that provides for the Federal government to seek the advice of citizens on a range of issues affecting its policies and programs – was set to take up a review, but the September meeting was cancelled, and reportedly, TSAC’s charter wasn’t renewed. We need TSAC back. Ultimately, this helps everyone to figure out this new law.

Taking it a step further, it might be worth considering  (for all inspected vessels, not just towing vessels) the transfer of commercial vessel oversight by civilians. Subchapter M should be aligned with other laws governing inspected vessels. To be sure; at TBS we are lucky: we deal with towing vessels. On the other hand, a Coast Guard inspector might board a towing vessel in the morning, attend a charter boat in the afternoon, a tank barge after that and then a ship. If they don’t always get it right, it isn’t hard to see why.

A few months into year number two of SubM, it is clear that the new rule is imperfect. It took the Coast Guard four years after the NPRM came out to publish the final rule and it still isn’t right. All that said; it is fair to ask, especially in the absence of TSAC, what happens now?

Pat Folan is a partner in Tug & Barge Solutions and has operated towing vessels from Maine to Corpus Christi, TX, including the Alabama Rivers, Lower Mississippi, Great Lakes and Erie Canal.  Tug & Barge Solutions exists to help companies and mariners adapt and then grow with SubM. The opinions in this article are his alone and may not reflect the views of MarineNews, its editors and/or publisher. Reach Captain Folan at [email protected]

This article first appeared in the November PRINT edition of MarineNews magazine. 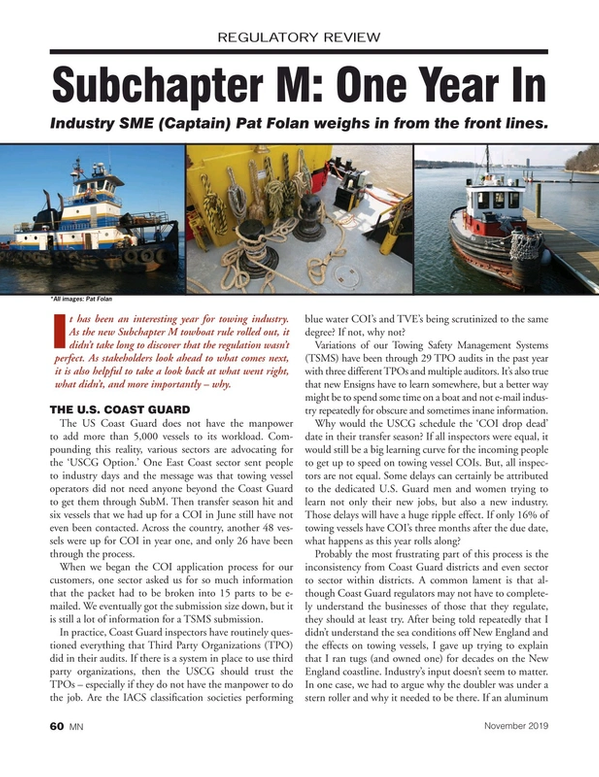