While the perennial issue of commercial vessel and recreational boat collisions, near misses and allisions with navigational aids are certainly nothing new, in much of  the navigable waters of the United States they are typically associated with the warmer weather of late spring, summer and early fall when privately-owned boats abound on the nation’s lakes, rivers, bays and sounds.

But even after the cabin cruisers, sailboats, jet skis, kayaks, canoes and paddleboards are stowed away for the season, those unfortunate encounters between working vessels and private watercraft continue to occur, albeit with less frequency, in the warmer climes of the country.

And with the national surge in popular interest in ferry commuting, natural sightseeing cruises, dinner boats and maritime tours, many more passengers of these vessels are taking advantage of these maritime-related activities…and are being exposed to the unique risks associated with same.

Confusing radar targets
Such was the case in late fall with dozens of passengers traveling on a commuter ferry through the narrow straits from a seaside town to a bustling terminal near a downtown business district in the Pacific Northwest.

Visibility in the morning fog was about a quarter mile as the ferry captain navigated his way through a familiar island chain steaming towards the main channel which would put him on track for an on-time arrival at the city dock. Once in the main channel, the captain reached and maintained a speed of about 25 knots. All of the vessel’s navigational and mechanical equipment was operating properly and the master, alone in his pilothouse, had engaged his running lights and activated the vessel’s automatic fog signal.

As the ferry drew closer to its destination, it entered a well-traveled channel and the captain decided to position his vessel closer to the green side of the narrow channel to avoid the always present recreational fishing boats located both ahead and on the periphery of the main channel. All was proceeding normally until the ferry was exiting past the last pair of buoys in the narrow channel and the captain began turning the vessel to port while maintaining his speed of just under 25 knots to approach the next familiar green can buoy. Visibility was still limited to about 1,500 feet, so the captain was navigating by radar and observed the green can buoy, appearing as a single target on radar, ahead and to his portside.

Suddenly, as the ferry proceeded further, the ‘buoy target’ split into two distinct targets. One radar target was clearly the green can buoy and the other appeared to be an unknown vessel moving to the northeast. From his familiarity with this section of his route, the ferry captain assumed the unknown target was a recreational fishing boat moving its position away from the navigational buoy to a safer location.

Since he could not turn to starboard without colliding with the crossing boat, he reduced speed, turned to port and very soon thereafter ran aground on submerged rocks outside of the marked channel. The vessel was grounded high and dry approximately 350 feet from the rugged shoreline. Making contact with the rocks while still moving at about eight knots impacted the ferry’s fiberglass hull, damaging its first watertight compartment. The captain did not observe any water entering the vessel and deduced that the ferry was not flooding and in danger of listing or sinking. Because of the location where the vessel sustained damage, no oil product pollution was triggered by the grounding. A subsequent survey estimated the hull damage in the $50,000 range.

Passengers sustain injuries
More troubling in the wake of the unexpected and somewhat violent grounding, were the reports of several passenger injuries resulting from the impact with the underwater rocks. Several passengers were ejected from their seats with two suffering facial lacerations and others complaining about neck and back pain. While none of those injured required hospitalization, several were either treated at the scene or when they were shuttled back to the city dock or at nearby urgent care facilities

Meanwhile back in the pilothouse, the shaken captain secured the vessel as best as possible and checked on the condition of his passengers and crew. He then contacted his company which immediately reported the incident to the local Coast Guard office and dispatched a relief vessel. The captain then called his USCG license insurer to report the claim, and was promptly assigned a maritime attorney who called him on his cell less than 15 minutes later to prepare him for his initial USCG post-casualty interview. That initial interview, conducted onboard the disabled ferry, went as well as could be expected, focusing primarily on the actions taken by the captain immediately prior to the grounding.

Later that week, the captain, accompanied by his license defense attorney, attended a second more formal interview at the Marine Safety Office and the red flags started flying. The lead Investigation Officer (IO) expressed serious concerns with several aspects of the captain’s story, and was particularly troubled by the ferry’s speed of close to 25 knots in limited visibility and the lack of communication attempts with the unknown fishing vessel when it was seen changing positions and posing a collision threat.

These concerns prompted the Coast Guard to present the licensed master with a settlement offer mandating a six-month license suspension, requiring the captain to surrender his license for two months, enroll in and successfully complete an approved bridge management course in that time period and return to work for a probationary period of four months which, if completed without any further incidents, his license would be returned to him.

Fully understanding that the settlement proposal was the Coast Guard’s final and best offer to resolve the matter before it brought negligence charges and set an Administrative Law court date (coupled with the mostly negative press generated by the accident’s resulting passenger injuries), the master and his defense attorney reluctantly decided to take the known penalty in hand rather than take their chances for a better outcome before an Administrative Law Judge (ALJ).

It was a bitter pill to swallow for the affected ferry captain, but not an unusual outcome in today’s highly-charged enforcement atmosphere which stresses full accountability (and consequences) for professional mariners’ decisions and actions…particularly when their ‘fragile cargo’ is local commuters. 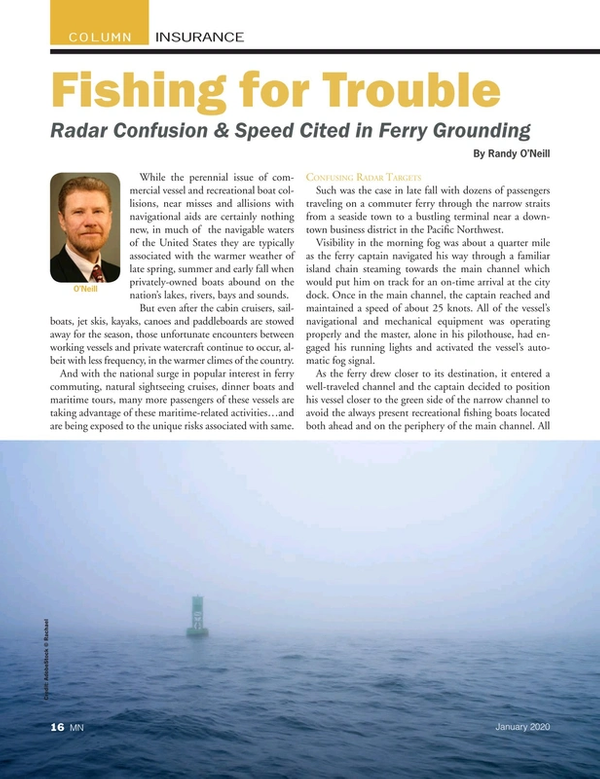