Interferry CEO Mike Corrigan describes a distinctly upbeat period in the worldwide ferry community – and explains how the global trade association plans to take its support to far-reaching new levels.

There are times when the phrase “there are three kinds of lies: lies, damned lies and statistics” seems all too true, but here’s an honest number for you – ferries carry a global total of more than 2 billion passengers a year, which is almost on a par with airlines.

Hard to believe? Not for those of us in the industry, but almost certainly for many citizens and politicians. We need to raise even more awareness among consumers and policy makers of what ferry services bring to the table as leading drivers of safe, cost effective and eco-friendly travel and trade. Now Interferry is poised to do just that with the launch of its 2020-22 Strategic Plan, a quantum leap of faith drawn up in top level liaison with members.

For all its apparent size, the ferry sector represents at most only 5% of overall world shipping, so a united front is essential in order to punch above its weight in an era of relentless competitive and regulatory challenges. The Stronger Together strategy adopted after I joined Interferry in April 2017 is amplified in our new three-year plan, which focuses on several key areas:

These objectives maintain and extend Interferry’s decades-long development, which has evolved from U.S.-based networking origins in 1976 to an established role as the worldwide voice of the ferry community – exemplified by consultative status at the International Maritime Organization (IMO). Our vision for taking the industry’s profile still higher is ambitious but entirely realistic, because it builds on the evidence of hugely encouraging advances in both developed and developing nations.

I truly believe that the industry has rarely if ever been in such good health. Most operators in the developed world are reporting year-on-year traffic growth and, in many cases, record passenger and vehicle volumes. They have turned challenges such as fixed links and low-cost airlines into opportunities by raising their game on the shipboard experience and their landside minibreak and vacation programs.

Meanwhile aggressive fleet expansion projects are underway to address not only rising demand but also the financial and environmental need for ultra-efficient vessel performance. From North America to Asia, Australia and Europe, orders for new ferries are resurgent among operators of all sizes.

Alternatives to fossil fuels have become a recurring feature of the newbuild designs. Climate change – now redefined as the climate emergency – has sparked a growing tide of regulatory compulsion to slash maritime air emissions. In the quest for zero emissions, the ferry sector leads the shipping industry in implementing the likes of battery and hydrogen power, as well as ‘cold ironing’ equipment that allows shoreside electricity supply to vessels at berth.

Case studies at Interferry’s 44th annual conference in London last October underlined the sector’s dedication to finding cutting-edge fuel solutions. Norled, a Norwegian operator recognized for pacemaking fleet electrification, announced ‘the next industry game-changer’ with its plan to introduce a hydrogen-fueled ferry in 2021. As the company explained: “The green shift is already there for short routes but not for longer distances. We think liquid hydrogen from clean sources such as wind, water or solar power will be the way.”

Another presentation featured the hydrogen-powered HySeas III ferry project, where Interferry is a partner in a consortium sponsored by the European Union (EU). Delegates heard that the drive train was being prepared for assembly and testing on land within months.

Such leadership was notably acknowledged by keynote speaker Guy Platten, secretary general of the International Chamber of Shipping (ICS). Praising ferries for being ‘at the bow wave of the latest propulsion revolution’, he asserted: “You are the pioneers in the shipping industry and will light the path. What you do now, the industry will follow. We want to learn from you in order to take the whole industry forward.” By a happy coincidence, there was a telling echo of our own strategic objectives when he concluded: “You can’t do it alone. Ferry operators are more exposed to public perception on emissions. You need the support of consumers, policy makers and financiers – reaching beyond your own community to make sure of an equitable and affordable transition.” 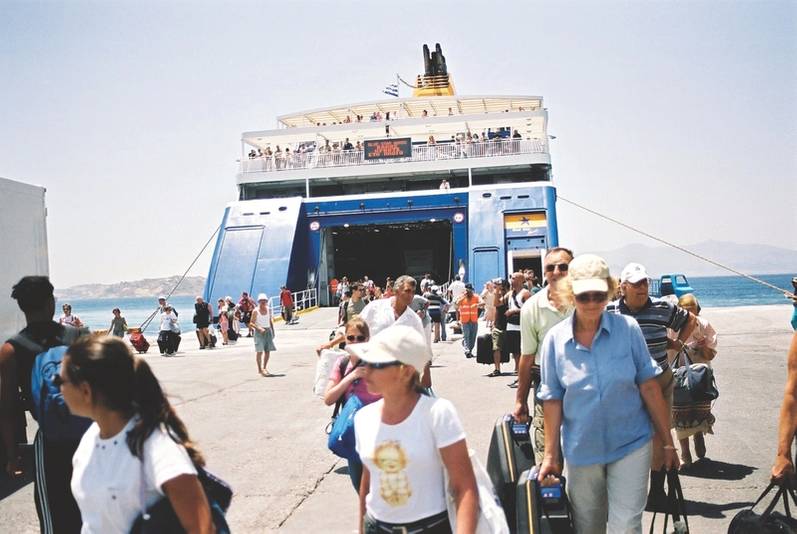 Most ferry operators in the developed world are reporting year-on-year traffic growth and, in many cases, record passenger and vehicle volumes. © Adobe Stock / Igor Strukov

My positive outlook on the state of the industry has also been shaped by a growing determination among developing nations to implement a much-needed enhancement of safety measures on their domestic ferry operations. In a major breakthrough last June, the IMO’s Maritime Safety Committee agreed to upgrade their hitherto advisory input and will now work to develop model regulations. Interferry backed the formal proposal from China in a move that marked our many years of lobbying and cooperation on the issue at the IMO.

In March and May last year, a team from Interferry’s purpose-formed FERRYSAFE project went to the Philippines to research how the nation’s safety record – previously worst in the world – had come into line with the global average over the past decade. The week-long visits to Manila and ferry capital Cebu covered 66 stakeholder interviews, seven ferry crossings, shipyard visits and meetings with the maritime, port and Coast Guard authorities – all with the aim of producing a ‘lessons learned’ document that can assist the IMO and other developing nations.

In November we reported on the project at the third annual ASEAN (Association of Southeast Asian Nations) ferry safety forum. The event in China was attended by more than 100 participants from 20 countries. Favorable feedback on our presentation prompted a number of invitations from delegates for Interferry to visit their operations and to hold our annual conference in the region in the next few years. It is extremely encouraging that our networking, aid and lobbying mission is becoming so well recognized and respected in the Asia Pacific region, and this will only be enhanced by our participation and sponsorship at the IMO ferry safety conference scheduled for Bangkok in March.

Interferry’s current membership – more than 260 ferry operators and suppliers in 40 countries – is predominantly based in North America, Europe and Australia. Reaching out to developing nations is a core objective of our Stronger Together strategy and, as in other areas of our activity, will maximize the potential for supporting their safety initiatives.

Safety and environmental issues have long been at the heart of our work, not least because regulatory proposals can inadvertently penalize the particular requirements of ferry design and operation. Interferry’s established reputation among the relevant authorities is key to the success of its interventions, which support the general objectives but argue for sector-specific amendments. A typical example came last June when the IMO safety committee agreed draft guidelines on ro-pax fire safety; we promptly lobbied for more discussion to prevent unproven construction recommendations.

Interferry has since become one of 27 research and industry partners in an initiative dubbed LASHFIRE - Legislative Assessment for Safety Hazards of Fire and Innovations in the Ro-Ro Ship Environment. This four-year EU-funded project aims to identify innovative additional measures enabling regulatory development and industry uptake. Our main role is to organize an advisory group of up to ten operators who will provide ongoing input.

As ever, we are also heavily involved with issues regarding environmental regulation. Last May the IMO Marine Environmental Protection Committee (MEPC) proposed potential short-term greenhouse gas (GHG) measures including stricter requirements on the Energy Efficiency Design Index, shaft power and speed. The committee also set a 2021 deadline to harmonize rules for discharge water from exhaust gas scrubbers. In November we attended the intersessional GHG meeting armed with ferry-appropriate proposals prepared by our specially formed working group. Ahead of the next MEPC session (March 30-April 3), we are now preparing a submission to ensure that any retroactive requirements are best designed to deliver a fair and meaningful improvement without penalizing early movers.

On every front, the next few years will surely test the validity of our Stronger Together strategy like never before, but I have no doubt that our combined efforts will continue to reap crucial benefits both for the industry and society as a whole. 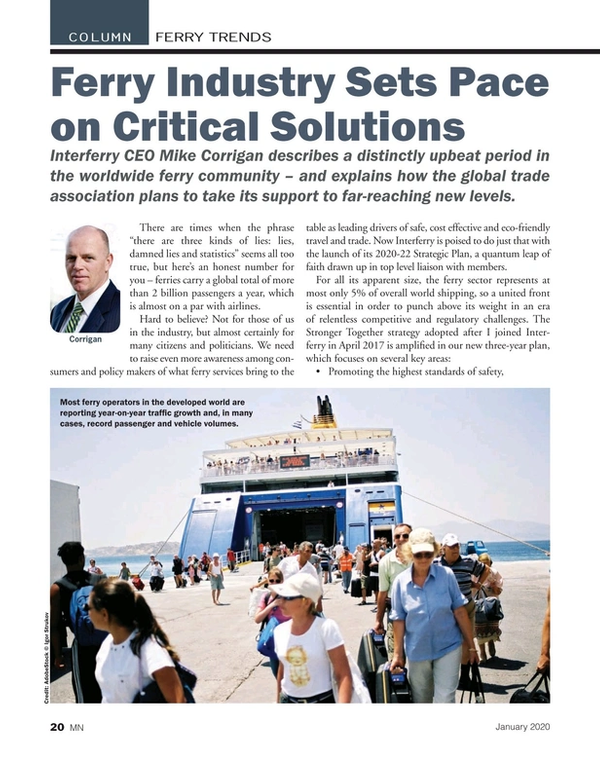