As the nation continues to be impacted by COVID-19, there are silver linings to the crisis: family time and togetherness, gratitude for what we had before it was taken away, and a chance to seek opportunities to be better and more productive.

As funding bills related to the COVID-19 crisis move forward, there may be an opportunity for the nation to better itself by modernizing its infrastructure.

Congress has, to date as of this writing, passed three phases of a coronavirus relief package. Phase One, enacted March 6, provided $8 billion primarily for health-related needs and international programs. Phase Two, enacted March 18, provided paid leave, tax credits, expanded unemployment and nutrition assistance, and free COVID-19 testing. Phase Three, enacted March 27, provided $2.2 trillion to support the government’s response to the pandemic and to help individuals and businesses impacted by the economic downturn. Phase Four was said to be a potential vehicle for infrastructure funding, with as much as $2 trillion touted by President Trump for this purpose, with indications of support from House Democrats. It now appears that Phase Four will not undertake infrastructure, but instead will provide more of what Phase Three offered, with around a quarter trillion dollars in additional relief for small businesses.

If infrastructure is to become part of a future emergency supplemental funding bill, the inland waterways fit nearly seamlessly into the reasons behind such an initiative – to jump-start the American economy and get American workers back on the job to build beneficial projects.

The majority of inland waterways’ locks and dams were built in the 1930s during The New Deal to create a more reliable, efficient river transportation network and to stimulate the U.S. economy with an influx of new construction jobs. Infrastructure remains a bipartisan issue that both sides of the political spectrum agree is critical to American progress and success.

Our nation’s lock and dam system keeps waterways channels and rivers navigable, generates hydropower for electricity, provides flood protection, supplies municipal and industrial water, offers national security, and creates recreational boating and fishing opportunities. Our inland waterways system transports commerce to and from 38 states, serving industrial and agricultural centers, and facilitating imports and exports at gateway ports on the Gulf Coast and in the Pacific Northwest. With the presence of the inland waterways transportation system, today’s energy producers, manufacturers, constructors, American family farmers and other commodity shippers can compete in the domestic and international marketplace. More than 541,000 family-wage jobs depend on the inland waterways, and the cargo moving on the system does so in the most energy-efficient, environmentally friendly and safest way compared to other modes.

In 2018, during the process to move a Water Resources Development Act (WRDA) 2018 in the Senate, Senator John Barrasso (R-Wyo.), Chairman of the Senate Environment and Public Works Committee, delivered remarks on the Senate floor on infrastructure that resonates today. “Over the past 50 years, our country has gone from a construction society to a consumption society – and as a result our bridges, roads, dams, and waterways have suffered....[this bill] grows the economy and creates jobs.” he said.

The same could be said about an emergency supplemental funding bill. The inland waterways are the beneficiary of that funding, but the nation itself reaps the overall economic and quality of life benefits.

On the waterways, as we begin to see agriculture exports pick up the pace, we recall the August 2019 U.S. Department of Agriculture (USDA) study that quantified the cost-savings and competitive advantages that would accrue from investing in long-delayed improvements to inland waterways locks and dams on the Upper Mississippi and Illinois River system. The study, Importance of Inland Waterways to U.S. Agriculture, addressed the critical connection between the inland waterways and the competitiveness of American agriculture in global markets.

The study highlighted that

The nation continues to combat COVID-19 and protect its citizens from the virus and further harm. But when we turn the corner toward recovery, let’s look to the future of America and to strengthening its critical infrastructure. A modern, more efficient inland waterways system will continue to deliver key commodities, but also the promise of a much stronger economy. 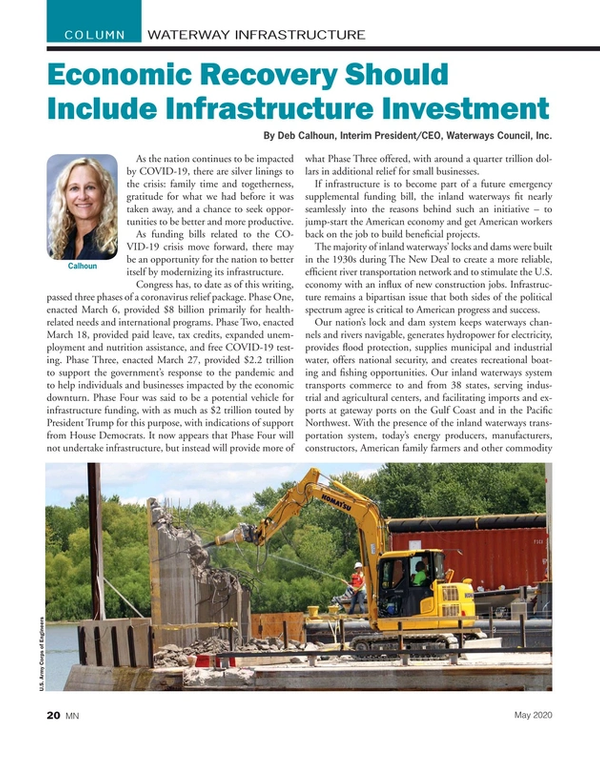 Read COVID-19 Economic Recovery Should Include Infrastructure Investment in Pdf, Flash or Html5 edition of May 2020 Marine News