Petrobras expects to raise a net $4.3 billion in global capital markets each year to fund its investment plan over the next five years, according to Chief Financial Officer Almir Barbassa. During a presentation to analysts on March 19th, Barbassa explained that the expected increase in crude oil production during the 2013-2017 period, which covers the investment plan, had allowed Petrobras to reduce its net financing needs by 50% compared with the 2012-2016 investment plan. Petrobras also expects to raise about $9.9b from divestments as part of the plan.

Petrobras has plans to invest $236.7b to develop massive offshore oil fields recently discovered off Brazil’s coast, virtually the same level as their last investment plan. Of the total sum planned, $207.1b of the investments are classified by the national operator as under implementation. Crude oil production is expected to reach 2.75 million barrels boe per day by 2017 and 5.7 million barrels boe per day by 2020.
Barbassa added that the national operators gross debt needs are expected to be about $12.3b annually over the next five years. Petrobras is banking heavily in new technologies and increasing its investments in R&D in order to meet the challenges posed by deepwater pre-salt exploration.
As a continuation of the 2012-16 business plan, the 2013-17 business plan was based on the following principles:

•    Maintaining the same production
targets for oil & gas production;
•    No additional projects, except those
related to oil & natural gas exploration
and production in Brazil;
•    Incorporating the results of the
structural support programs:
PROCOP, PROEF, PRCPoço and
INFRALOG;
•    Expanding the scope of the divestment
program (PRODESIN).

The second principal is a strategic decision which may allow Petrobras to keep up its exploration rate and also maintain, if not increase its investments in R&D, which is considered crucial in order to develop the complex deepwater pre-salt plays efficiently. E&P will see investments of $147.5b, with 62% of the funds earmarked for the 2013-2017 business plan. It is still unclear how much of this will be set aside for R&D, but there is no doubt that it will be a considerable sum, and that the biggest piece of the R&D pie will be forwarded to Cenpes, Petrobras’s in house research center.
Cenpes stands for “Centro de Pesquisas e Desenvolvimento Leopoldo Américo Miguez de Mello,” and it is reportedly the largest research complex in the Southern hemisphere, located about 10km from downtown Rio de Janeiro at Fundão Island, which is part of a technological complex administered by the Federal University of Rio de Janeiro (UFRJ). Both the old Cenpes center and the new building are located within what is known as the UFRJ Technology Park (or Rio Technology Park), which also houses Baker Hughes, Schlumberger, FMC Technologies, Halliburton, BG, and will also see R&D centers from General Electric, Tenaris, and Siemens.
After a short drive, which may take less than 15 minutes in normal traffic from downtown, you reach the sprawling Technology Center, where the new Cenpes building is located, just across the street from the old Cenpes complex. The $700 million structure, is a low structure, and proposes to be an environmentally friendly building, which has a mostly transparent roof in form of a wave, this lets in sunlight to reduce energy consumption. The top floors are adorned with a host of small gardens that receive sunlight from the roof and also collect and drain rainwater. In between these gardens are rest areas for the staff. The lower floors house administrative offices, conference rooms and auditoriums, with the high technology labs located on the ground floor.  One would expect large laboratories in such a sprawling futuristic building, yet that is not the case and on examining the labs and speaking to researchers it becomes clear that what is really important here is the high aggregated value of the minds that work in these labs, along with the state of the art equipment and the experience accumulated along many years of research.
Two of the most important labs are the Geophysics lab, known as Rock Physics Laboratory, which deals with measurements of seismic velocity in rock samples using a method of propagation of ultrasonic pulses. In this lab, it is possible to measure the reservoir under real conditions: pressure, temperature and saturation. By analyzing seismic velocity data measured in the Laboratory of Rock Physics and other data from other Cenpes laboratories, is possible to calibrate the seismic images used to evaluate reservoir potential and change these properties for rocks that are useful for developing oil fields and also to help to monitor production.
The database of accumulated information in these labs is invaluable to pinpoint new reservoirs and to plan water or CO2 injection parameters to increase reservoir pressures in order to facilitate and/or increase production. This may be of great importance in new deepwater acreage and also in older mature shallow water plays.
Another important lab is the Fluids Laboratory, coordinated by Rosana Lomba. This lab carries out research to develop innovations in drilling and completion fluid technology, such as developing drilling fluids, the suitability of fluid formulations in drilling and completion of wells in the Brazilian basins and the physical simulation of formation damage. They do extensive work on completion mud composition for the different reservoir characteristics and temperatures, which are vital to guarantee drilling efficiency and safety. Reservoir characterization in the deepwater pre-salt also requires advances in multiple fronts. Better 3D imaging through the salt is a start, and Cenpes also boasts of a state of the art 3D reservoir visualization capability, but the unpredictable carbonate formations always add to the difficulties. The complex biological origins of these formations make them somewhat unpredictable, according to Lomba. A better understanding is needed in how fluids interact with the rocks when estimating potential reserves, maximizing production and increasing drilling and production safety.
The level of research spending by Petrobras is not likely to be a limiting factor. Between 2013 and 2020, the 1% rule is expected to generate around $5b in R&D spending in Brazil. These are undoubtedly significant numbers for research investments, yet they are hardly a guarantee of positive results and only a continuous effort to research and understand the challenges of deepwater pre-salt reservoir characteristics will give any hope of assuring a successful E&P effort by Petrobras. To this end Cenpes Executive Manager, Marcos Assayag explained that their long term strategy, is anchored on technology development being in line with the business plans, encouragement of high-risk, high-reward project for radical innovations, such as moving towards more production equipment being placed on the seafloor, yet maintaining a gradual and safe implementation of new technologies. Petrobras and Cenpes are counting on intense cooperation with key research partners such as universities and high technological service providers, many of which are already present or soon will be, at the Rio Technology Center. 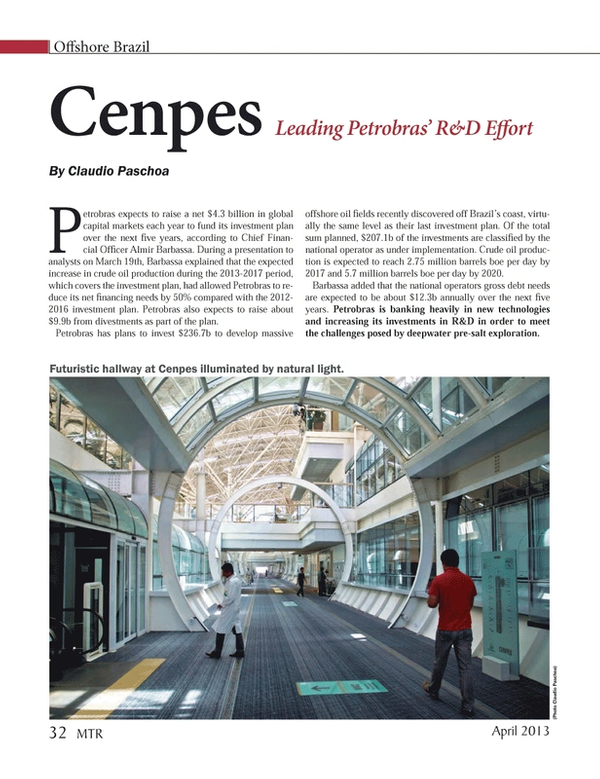