Traditionally thought an expensive alternative to traditional steel wire and conventional polyester-based synthetic ropes, offshore ropes and mooring systems made with Dyneema have been making inroads.  End users such as ConocoPhillips, Shell and Petrobras are working with systems based on the high-strength, low-weight fiber of DSM Dyneema. Coupled with their durability and longevity, these rope systems are increasingly recognized for a variety of performance and user benefits that ultimately save on the bottom line.
DSM Dyneema’s entry into the offshore industry more than 10 years ago met with more troubled waters initially.  Manufacturers and users were slow to latch on to the long term value and investment payback that Dyneema offered, as the higher upfront capital investment proved a disincentive.  In addition, Dyneema fiber supply was occasionally restricted due to capacity restrictions in the early days of market commercialization.
These issues no longer persist today.  Today fiber is gaining acceptance as a smart choice for the long term, an investment that can pay back on the CAPEX in a few short years. In addition, over the past 10 years DSM has invested significantly to boost capacity in its global plants in order to meet the growing year on year demand as well as anticipated market growth.
Most recently, Brazilian oil giant Petrobras specified Dyneema fibers for a complete set of mooring ropes for a semi-submersible mobile offshore drilling unit (MODU).
Petrobras specifically asked for the ropes to be made with SK78 grade of UHMWPE (ultra high molecular weight polyethylene) fibers from DSM Dyneema for its high strength at low weight properties. SK78 grade fiber was developed specifically for this type of mooring application and although it has a proven track record of success in Asia, U.S. and European waters, the Petrobras order marks the first time they will be used for MODU mooring in Brazil. SK78 is the only HMPE fiber approved by Bureau Veritas and ABS for MODU moorings.
Petrobras is expected to use eight mooring ropes made with Dyneema SK78 fiber on a MODU in its new Pre-Salt deepwater fields off the South-eastern coast of Brazil, site of one of the largest recent oil discoveries in the Western Hemisphere.
“Petrobras has chosen to use ropes made with Dyneema over polyester because of the lower weight and greater ease of handling. Polyester ropes with the same mechanical properties weigh around three times as much and are almost twice as thick as ropes made with Dyneema,” said Jorn Boesten,  Offshore Segment Manager at DSM Dyneema  “Steel ropes would weigh around seven times more than ropes made with Dyneema. Ropes made with Dyneema will allow Petrobras to moor the MODU more quickly, saving on equipment costs, as well as on support vessels, delivering lower operating costs and a positive return on the investment.”
Ropes made with Dyneema are proving a success in drill rig mooring systems which are typically relocated every 3-6 months during the span of a campaign, incurring time and heavy cost.  With Dyneema based systems every rig relocation delivers OPEX savings through a multitude of operational and performance benefits. In the course of relocating a drill rig the lighter ropes can translate into up to 40% faster mooring and installation compared to polyester. Rig down time is reduced considerably as hookup speed is expedited. It also means smaller Anchor Handling Vessels can be used, and less trips to shore are required.
Belgian Dredging International  switched its barge mooring lines from steel wire ropes to ropes made with Dyneema.  While initially more expensive, the improved productivity, ease and speed of handling and safety all reportedly made these ropes well worth the investment.
The saving can come from unexpected sources too.
Ropes made with Dyneema need no oil or grease, eliminating the need for grease, as well as the cost of manpower needed to apply and clean it up. In many cases, the period needed to payback the initial investment for these advanced ropes is short, particularly if you factor in the absence of injury-related costs, as well as those costs for maintenance, repair and replacement. “During the use of the ropes only minor abrasion could be observed. This contributes to their long life,” said Jorne Beyen of Dredging International. 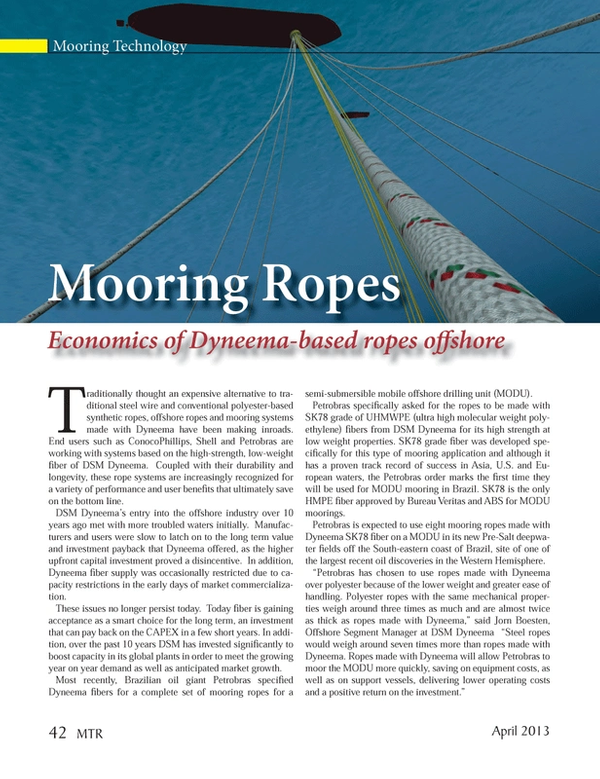