During a recent tour through the region, Claudio Paschoa, MTR’s Contributing Editor in Brazil, was able to post some questions to Eirik Tørrenssen, Country Manager Brazil, DOF Brasil. With offices in the O&G hubs Macaé and Rio, Tørrenssen is hard to corner, but between trips and meetings he managed to provide insight of DOF Group Brasilits pre-salt operations and on the challenges of building large OSV’s in the country.

DOF ASA is an international group involved in the ownership and operation of a fleet comprising supply and subsea vessels, and also owns service companies for the subsea market. The Group has a modern fleet with an average age of approximately six years. The fleet (wholly/partly owned) is comprised of 74 vessels (20 AHTS vessels, 24 PSVs and 30 CSVs), of which 69 are in operation and five are currently under construction, due for delivery in 2013 and 2014.
DOF Group Brasil is the arm of DOF ASA in the Brazilian region, comprised by Norskan Offshore and DOF Subsea Brasil that has the strategy to deliver integrated services for the offshore industry. In this context, Norskan (established in Brazil in 2002) is the responsible for the main technical management and operation of the fleet and DOF Subsea Brasil (established in 2006) provides highly specialized subsea services.  Today DOF Group Brasil operates 25 vessels (5 PSV, 11 AHTS, two PLSV, 7 CSV) in Brazil, with three vessels being built, as well as a fleet of 14 ROVs. Of its 25 operating vessels 12 were built in Brazil, leading the construction of state-of-the-art vessels in Brazil with assets like Skandi Salvador – the first construction vessel built in Brazil; SkandiVitória and SkandiNiterói – the first two PLSV’s built in Brazil (the only Brazilian build PLSV’s); and Skandi Amazonas and SkandiIguaçu, which are the biggest AHTS’s ever built in the country.

Has the requirement for Brazilian content posed any particular challenges in the building of these vessels?

We have been able to meet such requirements. But we think that this discussion is important, and we understand the government has a legitimate concern to reinforce and stimulate the Brazilian industry development in this sector.

What is the situation regarding sourcing qualified crew to man these vessels?

The lack of enough qualified personnel is an issue that affects the entire O&G industry, not only in Brazil, and when it comes to the maritime sector the situation is really challenging due to a lack of experienced seafarers. The Brazilian nationality requirement poses additional challenges, and we would be in favor of a relaxation of the regulation for a period of time to ease the pressure on the industry.

Could you highlight any areas of technical innovation that you feel DOF are pioneering in Brazil?

As mentioned before, we have been pioneering in regards to building high-end vessels and subsea equipment in Brazil in an effort to match the challenges of higher depths and operations in harsherenvironments due to the pre-salt discoveries. Our assets reflect theseprospects of the industry.

How is DOF Group Brasil relationship with STX shipyard?

We have a long term relationship with STX OSV Niterói and they have built nearly all our Brazilian vessels.

What are DOF Group Brasil future plans for shipbuilding in Brazil?

We still have 3 AHTS’s being built with STX Niterói to be delivered. SkandiUrca has performed the technical launch last year and is expected to be delivered until Q3 2013.

Could you tell us how the transition from the old Norskan ownership was done and what changed in the company now under full DOF management?

Norskan was originally a joint venture between Solstad and DOF but today Norskan Offshore is a 100% DOF ASA Company.

What are some of the subsea support systems you carry in your fleet?

How about on new AHTS vessel?

Skandi Iguaçu is the biggest AHTS built in Brazil to date. Skandi Iguacu has above 32,000 BHP installed and a bollard pull of 324 tons, which is far beyond any other anchor handler built in Brazil. The volumetric capacity for the winches is the highest capacity which Rolls-Royce has delivered to an anchor handler. Rolls-Royce is one of the main producers in the world for this equipment. Skandi Iguacu is constructed according to the DNV Clean Design notation, which stipulates requirements for controlling and limiting operational emissions and discharges.
These requirements cover the most important environmental aspects.

What are the technical advantages it provides?

The SI is a new generation high powered anchor handling vessel designed for field installation operations across a wide range of water depths and environmental conditions. It is outfitted with the latest equipment within safe AHTS operations, such as the largest AHTs winches, cargo rail cranes with manipulators and new systems for handling rig anchors at stern.

Why is it capable of reducing fuel consumption?

How does DOF/Norskan sees the Brazilian support and multipurpose vessel market for the next decade?

The Brazilian market is a market with many opportunities for growth. At the same time there is a challenge to cope with inflation, regulations, and scarcity of personnel. We are certain that Brazil will continue to be an important marketplace for DOF vessels, and we will continue to focus on managing the risks associated with operating in Brazil. The multipurpose vessel market in Brazil is still mainly dominated by foreign flag vessels, however since 2006 some maritime companies started building MPSV’s locally due to the growing demand and to the increasing regulation that gives priority on Brazilian built vessels. The Brazilian naval industry expects to have an increase of approximately 114 Brazilian built support vessels until 2020 and we believe that MPSV’s will take part on this growth. 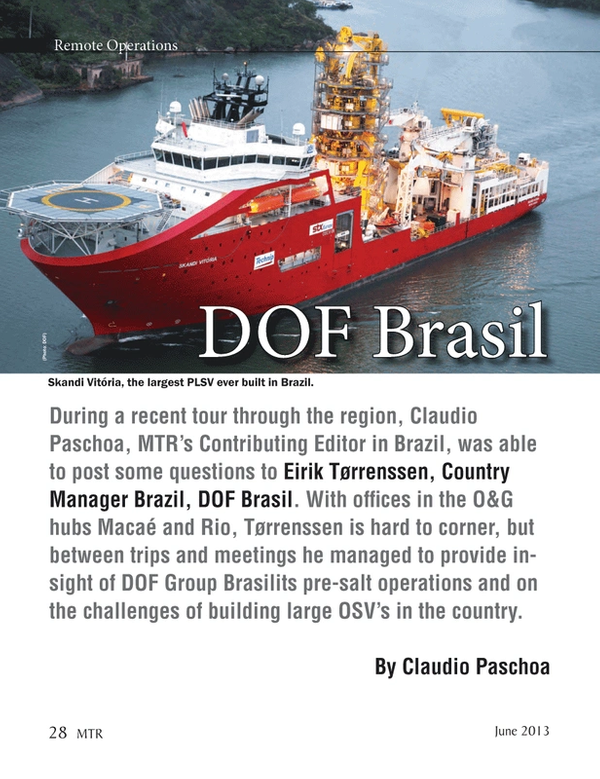