Ulstein Verft delivered Blue Thunder, the fourth of six medium-sized platform supply vessels of the PX121 design from ULSTEIN to Blue Ship Invest, on May 13, 2013. Owned by Blue Ship Invest, a wholly-owned company in Ulstein Group, the PSV is commercially and technically under the management of Atlantic Offshore. It will enter a four-month contract with Statoil, with four monthly options.  In the North Sea, PSVs of the PX121 designs are considered medium-sized. The vessels with this design have an optimal combination of fuel-efficiency and deadweight. They have the capacities and performance close to the segment for larger PSVs, but at a cost that provides excellent value-for-money. Blue Thunder measures 83.4 x 18 m, and is designed for a maximum speed of approximately 16 knots. It has a load capacity of 4,200 tons (dwt), and the 850 sq. m. cargo deck can carry a deck load of 2,200 tons. In addition to tanks for oil, water and drilling fluids, the vessel has four stainless steel tanks for flammable liquids. Blue Thunder has modern accommodation for 23, and is equipped with a dynamic positioning system IMO class II and meets the requirements of DNV’s Clean Design notation.


(As published in the June 2013 edition of Marine Technologies - www.seadiscovery.com) 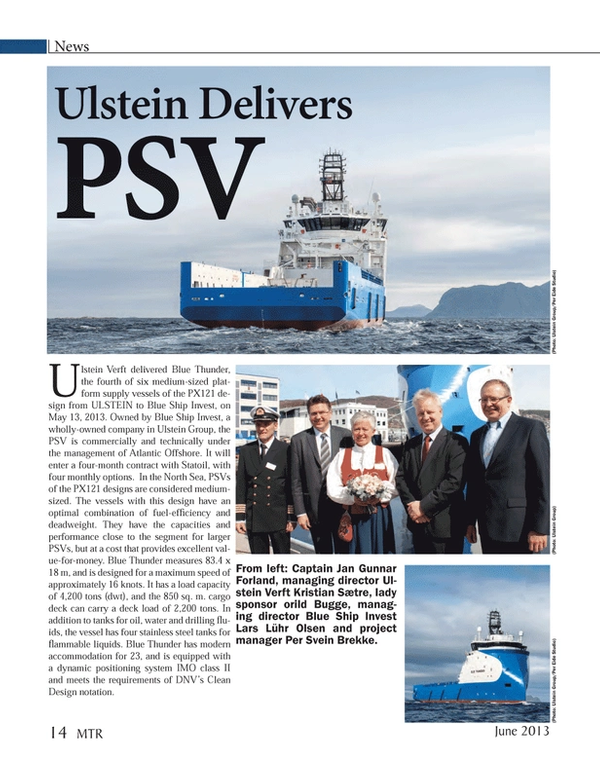