The U.S. Navy has made significant changes to its mine countermeasures (MCM) operations over the past decade as its Avenger-class MCM ships and Sea Stallion helicopters approach the end of their service life. One of the most significant developments has been the introduction of autonomous underwater vehicles (AUVs) into regular deployment by the Navy. The MK 18 Mod 2, a specialized version of the REMUS 600 AUV built by Hydroid, Inc. in Pocasset, Mass., is currently used for MCM operations by the U.S. Navy 5th Fleet in their area of responsibility, the Arabian Gulf. Using this technology to its full effect has had significant benefits.
The deployment of AUVs for mine countermeasures has allowed the U.S. Navy 5th Fleet to more safely and effectively ensure the security of our seal lanes of communication. The MK 18 Mod 2, like all REMUS 600s, has a maximum mission duration capability of 20 hours and top speed of five knots, allowing a single vehicle to survey significant portions of narrow and shallow straits in a single deployment. After the MK 18 Mod 2 has surfaced, its depleted battery can be quickly recharged and the vehicle redeployed.
The ability of the MK 18 Mod 2 to operate without being tethered to a ship makes it difficult for enemy forces to detect. In current 5th Fleet MCM operations, the AUV is launched from an 11 meter rigid-hulled inflatable boat (RHIB) deployed from an amphibious transport dock, such as the former USS Ponce. Deploying the vehicle from a small RHIB makes its launch more difficult to detect and its area of operation harder to determine.
The MK 18 Mod 2 can remain submerged for its entire mission duration, making it nearly impossible for the enemy to counter without advanced technology. This is especially important for combating non-state actors – similar to IEDs, naval mines are inexpensive and easy to deploy, making them an attractive option for terrorist groups.
For shallow water mine countermeasures and hydrographic reconnaissance, the MK 18 Mod 2 uses two primary instruments: side scan sonar and a downward looking camera. On its first deployment to a new area, the vehicle collects high-resolution bathymetric data and images that allow it to establish a baseline map of the seafloor. During subsequent deployments, the AUV looks for any changes in the terrain of the seafloor which may represent a mine. Once a mine has been positively identified and its location fixed, a Remotely Operated Vehicle or diver can be sent in to destroy it. Data collected by vehicle can then be integrated with other intelligence to identify to help determine the mine’s origin.
In addition to the MK 18 Mod 2, the U.S. Navy also uses another modified Hydroid vehicle for MCM operations. The MK 18 Mod 1, an AUV based on the Hydroid REMUS 100 vehicle, is a smaller, man-portable vehicle designed for rapid deployment to very shallow water (VSW) regions. Ideal for fast moving expeditionary forces, the Swordfish can be launched from nearly anywhere and can be flown by helicopter directly to the point of need.  Though it lacks the deeper water capabilities of larger AUVs, the MK 18 Mod 1 is very effective at quickly clearing harbors and ports where mines are suspected.
Currently operated by civilian contractors, the Hydroid AUVs in use by the U.S. Navy 5th Fleet are expected to come under full Navy control in 2015. As the newer littoral combat ship (LCS) enters broad deployment over the coming decade, the MK 18 Mod 2 can continue to serve a role in MCM operations. The LCS will have the capability to deploy several types of AUVs depending on the needs of the mission – the mid-depth MK 18 Mod 2 and the ultra-portable MK 18 Mod 1 can complement the capabilities of other AUVs on-board the LCS, allowing the ship to conduct effective mine countermeasures in any marine environment. 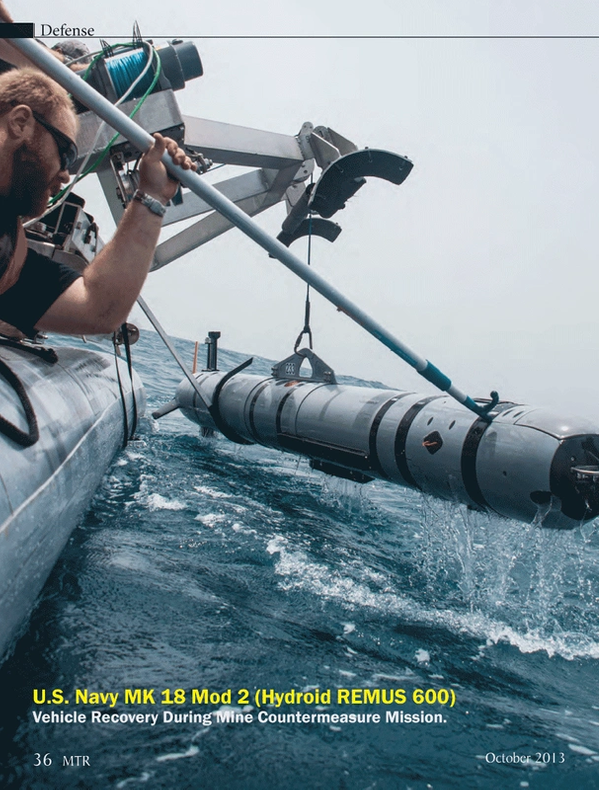