From Learning to Earning

Scripps works to bring new tech to the marketplace

Scripps Institution of Oceanography, a division of the University of California, San Diego, has been a leader in academic research for most of its 110-year history. Though for much of that time the research findings and academic knowledge were largely kept locked within the walls of the institution. Today that is beginning to change as Scripps endeavors to build collaborative relationships with private businesses to bring some of its latest discoveries to the commercial marketplace.

Spearheading that effort is Hans de Salas-Del Valle, the latest Business Development Analyst at Scripps. He and Dr. Jeffrey Gee, Deputy Director of Research are both committed to forming beneficial partnerships with either existing private companies who are interested in licensing some of the processes and equipment developed at Scripps, or by facilitating start-up businesses dedicated to commercializing their inventions.

Among the many research groups and projects ripe for future commercial markets is the Marine Natural Products Group. Scripps is isolating new compounds from marine organisms with the goal of developing new medicines for the pharmaceutical and cosmetics industry.
Another area of intense interest to the commercial market is Scripps’ work on algae bio-fuels. According to de Salas-Del Valle, marine microalgae is an exciting area for research as scientists focus on enhancing the productivity of lipid-producing algae. These lipids have the potential for producing diesel or jet fuel. Increasing quantity and decreasing the costs are the focus of current research. Scripps has some of the leading scientists in the world working on this promising technology. Says de Salas-Del Valle, “It doesn’t get much attention in the press, but it will eventually allow [bio-fuel] to be economically viable.”

Making new fuel is not the only exciting prospect in algae research. “Algae can absorb CO2,” says de Salas-Del Valle. “We are working with a Southern California gas company to design and deploy a system of algae-based filters that can absorb CO2 at the point of emission.”
Keeping the research going and growing requires a lot of people-power. They currently have approximately 250 PhD students and 150 faculty and researchers working alongside a number of engineers and technicians who support the researchers by developing the tools they need.

While private universities have encouraged and sought out sponsored research, the majority of Scripps funding comes from federal sources; National Science Foundation, NOAA, and the Office of Naval Research primarily. Federal funding is an uncertainty these days. There are a few exceptions; the marine electromagnetics groups are funded by a consortium of oil and energy companies. This partnership allows the university to develop instrumentation and train students how to analyze the data collected. The industry then hires the students when they are ready to move into the workforce.

This is a fairly traditional model, but in a few instances, the technology developed is so novel and potentially valuable that a new company can be created around it. Three success stories of businesses created around Scripps technology include MRV Systems, EarthRisk Technologies and Quad Geometrics.

MRV Systems
MRV Systems makes vertical profiling floats for oceanographic research. Company CEO, Jim Defour, was a 30-year member of Scripps’ Instrument Development Group (IDG). Defour’s team, led by Dr. Russ Davis, collaborated with Woods Hole Oceanographic Institution to develop the floats now used in the international Argo network. (Argo is a global array of roughly 3,600 free-drifting, vertical profiling floats that measure temperature, salinity, and the velocity of currents in the upper 2000 meters of the ocean. Data collected is relayed via satellite and made available to the public.) When Defour retired, he started MRV Systems and licensed the float technology that had been the focus of his work since the 1980s and immediately set about improving the product. MRV’s first order totaled $1.8m and gave the fledgling company just nine months to perfect the float for commercial use.

“It was a stressful time,” says Defour. Improvements to the float amounted to about a 50% overhaul and there was no room for error. “There’s no second chance. You can’t go and pick them up if they don’t work.” Scientists can be skittish about trying a new product; the Argo order was vote of trust, and they had to get it right the first time.

Improvements included reducing the bulky float weight of 27kg down to a slimmer 19kg. The floats deployed today are about 52 in. tall including the antenna, and about 6.5 in. in diameter. Cost is always an issue and MRV has been able to reduce the cost of each profile to about $130, although their ultimate goal is to bring it below $100. MRV’s power systems last for about eight years, but the sensors are only capable of producing about 300 profiles. MRV is working on improving the longevity of the sensors to increase the useful lifespan of the float and further improve the ROI numbers.

MRV System’s Solo II float follows a programmed schedule for profiling. Once launched, the float sinks to 1,000m where it hibernates for nine days. On the 10th day it wakes up, drops to 2,000m and begins a 5.5-hour return trip to the surface at a rate of 10cm/second. Along its upward trajectory, it takes measurements of temperature, salinity and depth. When it arrives at the surface, it transmits its data via satellite then returns to the relative safety of its 1000m resting place and goes back to sleep. This pattern is repeated regularly until the float runs out of power or the sensors fail. Information sharing is not always a one-way street. During its brief moments at the surface, scientists can reprogram the float’s computer and change its pattern if needed.

Sinking and rising is accomplished by transferring a bio-oil substance between a chamber inside the float and a rubber bladder outside the float. This energy efficient change of density allows the float to sink and return to the surface much like a buoyancy compensator works for a SCUBA diver.

Progress in ocean profiling has moved quickly. The Argo project started in 1999 and by 2007 had well over 3,000 floats deployed each yielding new profile data every 10 days. To date, the float network has produced more than 2 million profiles. This glut of information is managed by JCommOps, a global oceanographic data management service and made available to scientists around the world through an open source interface.

MRV is working on a smaller device for air-deployment to monitor what is happening below the ocean surface before, during and after a hurricane. Working with the 53rd Weather Reconnaissance Squadron, AKA “The Hurricane Hunters,” MRV System floats will be dropped from planes ahead of the hurricane season. The tiny probes will hide out safely below the surface sending back their valuable data in rapid succession – no sleeping on the job for this robot crew. Their data is expected to increase hurricane knowledge exponentially, helping scientists understand how the ocean influences the swirling air mass above, and how the air affects the ocean.

When asked how commercial entities can partner with Scripps to utilize the brain trust at the university, Dufour chooses his words carefully. “Universities are all about discovery and asking questions, but the commercial world, my world, is all about solutions and finding answers. Making the connection between the science and the public is a huge challenge and a necessity in this world.” Dufour believes that a fast-track way must be found to integrate the good science coming out of our higher learning institutions with the solutions-based mindset of commercial business. One of the best ways to build the connection between the universities and commercial organizations, in his opinion, is for commercial business to develop the data gathering products then turn the data over to the Scripps scientists for analysis. “Nobody is better at analyzing it in a creative way.”

“Traditional means of funding are drying up for the universities. They need to start building partnerships with commercial entities.” The MRV, Scripps and Woods Hole relationship is a great example of a success story. “If it wasn’t for Scripps, I wouldn’t be doing what I’m doing,” said Dufour. 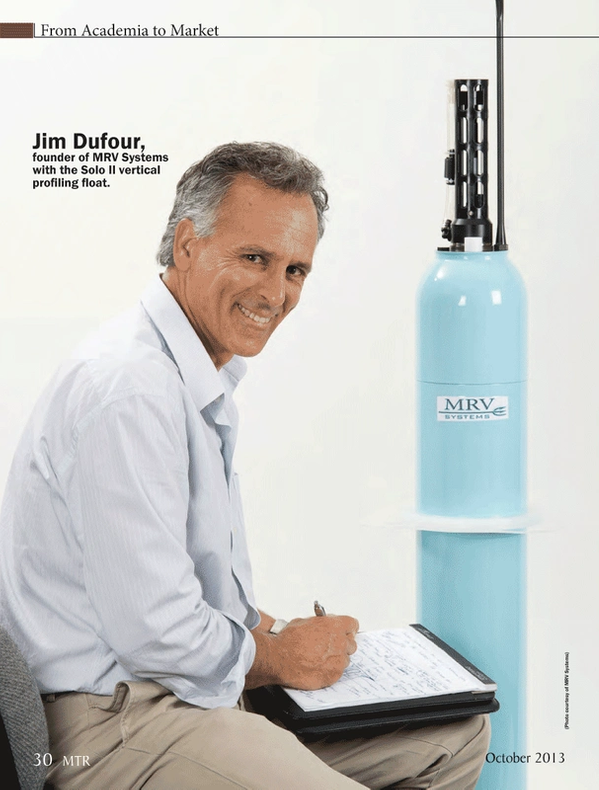 Read From Learning to Earning in Pdf, Flash or Html5 edition of October 2013 Marine Technology