My original business partner, Mike Redstone, previously worked for Vickers Slingsby which was involved quite extensively with the Ministry of Defense (M.O.D.). At that time, in the late seventies, close involvement with the M.O.D. was commonplace. In addition to central office, located at Abbey Wood, our main contact offices were Bath and D.E.R.A. at Portland – now all gone. The first submarine contract with which we were involved was the Vanguard Class SSBN which deployed the 16 Trident D5 missile system and it began trials in 1992. Hydro Bond Engineering and Hydro Cable Systems were involved with outboard cable and connector systems for the onboard degaussing units, following on with similar projects for its sister boats Victorious, Vigilant and Vengeance.

The modus operandi for UK submarines during the cold war was to run silent, run deep and to capture signal, noise and signature data from the enemy known as the “Take” and, of course, to deliver a nuclear strike from their unknown position somewhere near to Russia. The UK was ahead of its field in sonars, so most submarine platforms had cable and connector systems fitted.

Sonar development has moved on at considerable pace and comprises more highly technical equipment, external to the hull, which requires cables and connectors that feed through the hull to the heart and operations of the boat. An example is periscopes, which are referred to as masts, which penetrated the hull of the submarine. Watch the old black and white war movies – when the Commander shouts “Up periscope!” and half of the Atlantic comes rushing in! Now, with advanced technology, the mast is external to the hull and all of the data and communications are fed via cables and connectors using fiber optics, which is Hydro Group’s area of expertise. Today, mine counter measures, (MCMs) towed arrays, active and passive sonars and anti-surface ship missiles are necessary requirements of the new construction for modernization of current submarines in service, such as the UK’s Astute fleet.

The Astute Class Submarine is currently the most advanced and powerful attack submarine ever operated by the Royal Navy at over 7500 tonnes submerged, capable of speeds more than 30 knots, powered by Rolls Royce PWR2 reactors. The duration range for deployment is only limited by the amount of food on board so it can stay at sea for months at a time. It is armed with land attack missiles and Spearfish torpedoes. Its sonar system 2076 is the world’s most advanced and is fitted with Hydro Group’s cables and connectors.

Bearing in mind the cost of the nuclear defense program, controversial as it is, the construction of a nuclear submarine is in the billions and the support services and duties around the world is in the millions. Submarines are continually being built to larger specifications (tonnage) and this is true for all counties around the globe which build them. So, it’s essential that the equipment installed is designed, tested, and qualified to last its lifetime to ensure the boat’s security and the men who work on it.

Hydro Group is involved in subsea engineering in the oil & gas and renewable energy industries and provides similar solutions and designed products which have synergy with those we produce for the defense industry. Our innovation is focused on the longevity of product where the installation has a life cycle requirement of 40 years.

Evolving technology and dynamic mission profiles have driven change in the industry. Underwater sensor and propulsion innovation have enabled extended subsea endurance and has broadened the operational scope of today’s submarines. Mission profiles now include intelligence, surveillance and reconnaissance operations (ISR) and for the deployment of Special Forces on covert missions in hostile territory. The versatility of submarine operations is constantly adapting to meet the different types of global threat.

Many other nations are looking to modernize their own fleet of submarines and a shift in procurement patterns is stimulating collaboration and consolidation in the market. The Asia Pacific region is one such significant growth area for the submarine market. The jostling for power amidst a growing sense of hostility is fueling an arms race in the region and driving the need for submarine protection. Territorial disputes between counties are increasing and they are all primarily dependent upon maritime routes. South Korea is embarking on an indigenous program of submarine construction and, due to its commercial acumen of driving down costs, will also give the country a platform to sell and build boats to other countries.

Asia is expected to impact significantly on the submarine market over the next several years, with an estimated expenditure of $46 billion dollars, a figure matched by the whole of Europe on its submarine building programs. Currently the global market is dominated by America with 46% of all build, followed by Europe with 25%, Asia with 24% and Latin America with 5%. The Asia Pacific region has recovered from the global economic slowdown which is encouraging spending on defene and in particular submarines.

Hydro Group addresses diverse and in some cases rapidly changing markets, albeit the submarine programs move at a slower pace, the technological innovation developed is long term in its planning and well in advance of future implementation. In order to keep pace with demand we work closely with our customers to understand their technology and business needs to engage at an early stage of the product design cycle. Cooperation in the design of solutions allows us to gain invaluable insight into the functional objectives and to address any specific technology opportunities. This minimizes product realization timescales.
Replacing the current Astute submarine fleet will be Successor, which will carry the U.K.’s strategic nuclear deterrent. According to Naval Forces, Successor will be the largest and most advanced submerged platforms operated by the Royal Navy and the design and construction will be the most technologically complex in the history of the U.K.

Successor will be built and equipped by BAE Systems. Hydro Group has been selected to design, develop and qualify a range of connectorized through-hull penetrators on the submarine fleet, which has been acknowledged by BAE as offering a highly innovative and cost effective penetrator solution to take the Successor fleet into the next decade. The project will engage a dedicated team of Hydro Group’s engineers and the new technology requirements dove-tail with the Group’s current extensive R & D program. The design and development of the new range of through-hull penetrators will be subjected to a process vigorously controlled by extremely onerous standards and testing procedures with a demanding set of electrical power and signal, radio frequency and optical requirements. The design must guarantee a cast iron capability for the system to perform its mechanical function in harsh or hazardous environments and to ensure that this can be achieved without limiting the electrical or optical performance.

A core aspect of the innovation for the new through-hull penetrators is the migration of inserts from Hydro Group’s existing range of submarine dry mate connectors (SDMs), originally developed for the Astute Program.
The complimentary requirements of the subsea energy, defense, scientific and offshore renewables markets provide scope for Hydro Group to adopt and adapt appropriate processes that enhance the solutions and service provided to all subsea markets. Technological solutions for the Successor fleet will undoubtedly advance innovative research and development in other industries.

Continuous investment in our equipment, processes and facilities, together with our commitment to training and staff development all contribute to flexible and adaptable support to our customers and to providing active participation in a number of collaborative programs with them and other consortiums.

Technological advancement of submarines will continue to provide a business opportunity for Hydro Group, strategically focussed on the U.K.’s defense capability, and long term, around the globe.

(As published in the October 2014 edition of Marine Technology Reporter - http://www.marinetechnologynews.com/Magazine) 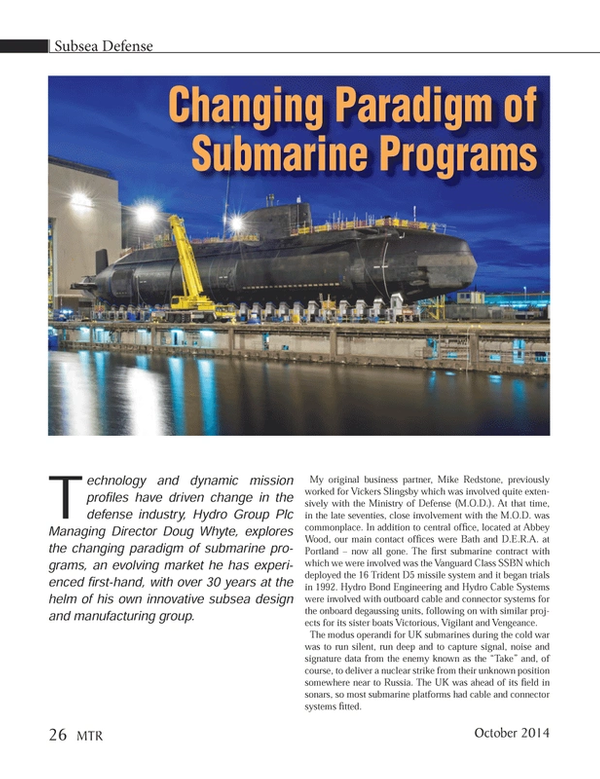