San Diego’s “Blue Tech” cluster is making waves.  And like a high tide, the powerful “Blue Economy” is raising a lot of boats. What is the “Blue Economy?”  It has been defined as the sum of all economic activity having to do with oceans, seas, harbors, ports and coastal zones.  San Diego’s “Blue Economy” includes a growing cluster of maritime-related companies and organizations across 16 industry sectors including fish farming, desalination and clean water technology, subsea exploration, biomedicine, defense, marine recreation and ocean observation.
San Diego has a significant defense presence, particularly with the Navy and Marine Corps.  There are major defense and academic research facilities such as the Navy’s Space and Naval Warfare Command (SPAWAR), and the University of California – San Diego’s Scripps Institution of Oceanography.
There are many factors that contribute to the success and cohesion of this commercial community.  First and foremost is the ocean, itself.  The cluster of both suppliers and customers mean that buyers, sellers and users are in close proximity with each other to facilitate collaboration.   San Diego is an area with a number of world-class universities and research organizations, and has a deep pool of available and qualified talent.

Location is Everything
Marine technology companies, large and small, benefit from the Blue Tech cluster. San Diego-based SIDUS Solutions has 15 employees and definitely sees itself as part of the Blue Tech Community.
According to Leonard Pool, managing director for SIDUS Solutions, being located in the San Diego Blue Tech community has real benefits. “San Diego is a unique community that has grown since the mid-50s to specialize in subsea applications, initially for military activities.  It is due to this history, the available access to local community colleges, along with the coastal environment that we selected San Diego to be our home.”
“The largest advantage is the ability to be close with our peers,” Pool says, “and the ability to go surfing on the weekends.”
SIDUS designs and manufactures security and surveillance systems for subsea and hazardous areas, and offers engineering and technical services for custom projects and integrated systems.  SIDUS’ main office is located in San Diego, where all engineering and manufacturing are performed.  “We also maintain a sales office in Houston, Texas to help support our oil and gas customers.  In addition we have a partnership with a company in the Netherlands,” says Pool.

Defining the Blue Community
Michael Jones of The Maritime Alliance (TMA) in San Diego says we don’t know just how big the ocean and maritime technology industries are in the U.S.  TMA has worked with partners on several studies to understand BlueTech companies and organizations in San Diego and their importance to each other and the regional economy.
Jones says San Diego is not alone in studying and developing its Blue Economy.  TMA is collaborating with a number of U.S. and international organizations to promote the Blue Economy and BlueTech including the Center for Scientific Research and Higher Education (CICSES) of Ensenada, Mexico; OceansAdvance Inc. in St. John’s, Canada; the Maritime Innovative Territories International Network” (MiTiN) in Brest, France; and the University of Southern Mississippi.    In 2013, the U.S. Integrated Ocean Observing System (IOOS) program office at the National Oceanic and Atmospheric Administration (NOAA) contracted with ERISS Corporation to work with TMA on a multi-year study to articulate the economic impact of the ocean observation sector in the U.S. According to Zdenka Willis, the U.S. IOOS program director, IOOS data and information fuels ocean  industry with knowledge that determines business operations. “Shellfish growers rely on ocean acidification data to know when to take action to protect crops. Shipping companies check ocean currents, wave heights, and bridge clearance data to know when it is safe to deliver goods. This study will begin to quantify our economic benefits with facts, figures, company names and more.”

Observing Impact
According to Steve Talley, PhD, project manager for the ERISS study, the effort lies in looking at who is taking IOOS ocean observation data, adding value to it and/or using it to create a product.  Talley said that many people use the datastream — from oil and gas companies planning deep ocean exploration to people creating windsurfing forecast smartphone applications — and don’t even realize where it comes from.
“We want to learn about who is using the data, and what they are doing with it,” said Tally.  “We want to know what the barriers may be in the way of people making full use of the data, and if users know how to fully understand the data.”
Tally says the assumption is that many people are using the IOOS data for economic benefit, and the study wants to determine the impact of that.  “Who is using the data, and is it doing any good?”
Ocean observation is a sub-sector of Blue Tech, and includes manufacturers, service suppliers and intermediaries.  These companies may not be exclusively working in ocean observation.  There are big companies, but the majority have less than 20 employees.
“We want to get recognition of the impact of this ‘cluster,’ and show people that ocean observing is a huge economic boon to grow business to create revenue,” Tally says.
“We also want to find out if we can help business expand if they were able to interact better with IOOS.  We may need to educate people, and establish a training center,” he says.
The project has taken off.  What was originally going to be a three-year study is being compressed into two years because people are so anxious to see the results.
“We can’t do a complete technical economic impact report.  Our study is more of an economic profile.  But it will be a very informative report,” Tally says.  “It may lead to a follow-on project.”
(For information on the study:
http://www.usworks.com/usioos/)

Blue Voice
The Maritime Alliance will host the 6th annual BlueTech & Blue Economy Summit and Tech Expo on Nov. 12-13 in San Diego to focus with public and private sector executives on an array of topics important to the growth of the Blue Economy.  The Gala Dinner and Award Ceremony on the evening of Nov. 12 will focus on OceanSTEM (science, technology, engineering and math related to the oceans), maritime workforce development and the creation of a national Blue Voice.
For information on the Expo, turn to page 52 & 53

The Summit will also examine coastal and marine spatial planning (CMSP) efforts to identify the best use of the ocean’s resources.  CMSP is a comprehensive, adaptive, integrated, ecosystem-based, and transparent planning process for current and projected uses of the maritime environment.  It is based on sound science and integrates ecological, economic, and social information to inform management and regulatory decisions, reduce conflicts, and facilitate compatibility among projected uses, while sustaining the State’s marine ecosystem and resources for present as well as future generations.
“We are promoting San Diego as a site for CMSP, but there is no current process underway,” Jones says.
The U.S. Small Business Administration announced on Sept. 30 that it was supporting a new regional innovation clusters, to include a Marine Industries Science and Technology (MIST) cluster along I-10 Corridor including Louisiana, Mississippi, Alabama, and Florida. The MIST cluster will focus on the Stennis Space Center’s ecosystem of world class marine technology research, the highest concentration of oceanographers in the world, and a broad consortium of federal and state partners to provide targeted support for the creation and growth of small businesses involved in “blue technology.”


(As published in the October 2014 edition of Marine Technology Reporter - http://www.marinetechnologynews.com/Magazine) 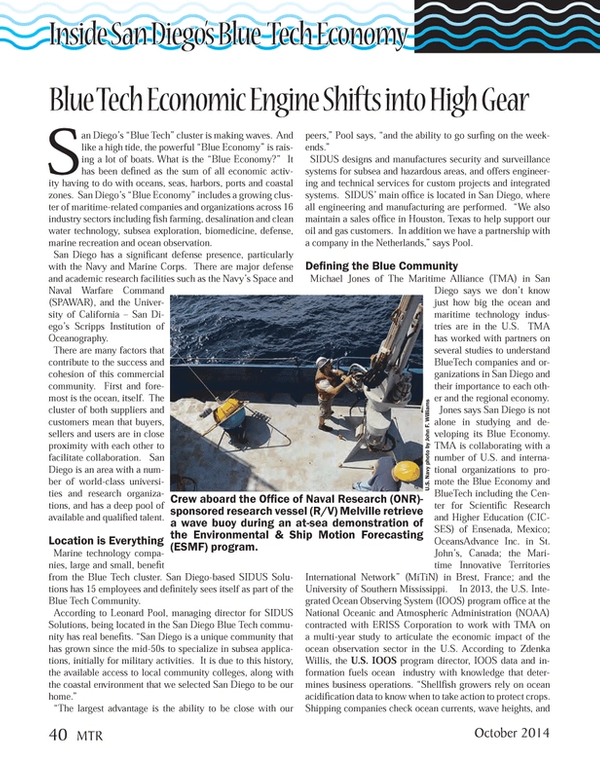