As long as the moon continues to orbit the earth, there will be energy in the tides. This reliability is just one of the many advantages of tidal energy, and as sea levels rise, it will become even more relevant as the effect of climate change becomes a reality. In the U.K. alone, the government estimates that wave and tidal combined has the potential to deliver 30 – 50GW equating to around 20 percent of the country’s current electricity needs. As investment and innovation begin to surge across the sector, Dutch-based tidal energy leader Tocardo joins with Nortek to help optimize the operational performance of its turbines.

Unlike other forms of renewable energy, tidal energy isn’t dependent on random weather patterns but offer a uniform, reliable and an inexhaustible source of energy. Furthermore, turbines installed in the water are out of sight; something that has been a controversial issue in connection with both land and offshore wind farms.

As a leading designer and producer of tidal and free-flow water turbines, Tocardo sought to measure water speeds through the rotor of the turbines to further verify and optimize the turbine’s production of clean energy. In order to achieve this, they needed to find a ADCP that could cope with the challenging conditions.

Adapting for Tidal Energy
Den Oever is a tidal testing center that operates in the Afsluitdijk tidal barrage, one of the most prestigious civil structures built in the 20th century. The 33-kilometer long dam was built in the 1930s to protect the Netherlands from flooding.

Tocardo engineers wanted to use ADCPs to verify the performance of the turbines and check the ‘Cp/Lambda’ curve, which is used to determine the rotor power for any combination of water and rotor speed.

Kamminga said, “It was a very challenging environment to work in. We were using the ADCP to measure currents really close to the turbines, and the water flow in these locations are very strong because the performance of the turbine, and energy outcome, is much better there. That’s understandable, but when it comes to deploying an instrument, it’s not an easy place to work especially while making sure the boat didn’t get chopped up. We also had some unexpected technical challenges that we had to overcome.”

Each turbine creates an electronic noise, otherwise known as an Electromagnetic Compatibility (EMC) noise spectrum. This was picked up by the communication and power-line of the ADCP, distorting the instrument’s signal and decreasing the measurement range. Nortek analyzed the noise spectrum present at the site and was able to modify the internal filter of the power supply to reduce the EMC noise and enable the 20-meter range.

“There are subtle electronics in the ADCP instrument, and the turbine itself is basically a giant electromagnet. This meant that initially, we couldn’t get any useful data so close to the turbines. There is also a lot of fluctuation and turbulence in the water. To measure that properly you need to measure quickly and accurately at the same time, but our old products could only measure currents every 1-2 minutes, so we needed to make some changes.”

Turbulence can reduce the efficiency of the turbine’s performance and cause fatigue on the structure. For engineers to maintain the system effectively, Nortek also had to find a way to capture turbulence at Tocardo’s testing facility.

Kamminga said, “We had to redesign the instruments to better cope with all the challenges we encountered – some challenges no one knew existed until now – and we came up with an improved version of the Signature1000. The Signature1000 is the only instrument which is capable of collecting current profile data with a 16 Hz sampling rate, a big increase compared to the older 4 Hz models.”

The turbine blades have a maximum turn rate of two revolutions per second.  Nortek’s new ADCP makes it possible to collect ample data Tocardo needed – even in these challenging conditions – and help propel tidal energy into the next stages of commercialization.

The velocity data provided by the ADCPs help Tocardo determine the performance of the turbine. The validity can be checked with the amplitude and correlation data, but Tocardo also discovered an additional benefit to this previously underutilized information.

The amplitude data contains information about the returned echo of the transmitted acoustic signal. Acting as a strong reflector, the blades can be recognized during the validation of the data. While using a mechanism to control the orientation of the blades, Tocardo discovered that by looking at the profile of the amplitude, they could learn what happens when they change the orientation in specific conditions.

The ADCP data have also contributed to the calibration and further improvements of Tocardo’s CFD software model and provided new design improvements relevant for performance and reliability. Furthermore, the instruments have helped to provide accurate energy yield predictions for individual devices and optimize array layouts.

Growing the Tidal Sector
As well as the test facility in Den Oever, Tocardo successfully uses Signature instruments on two other locations in the Netherlands: The Eastern Scheldt storm surge barrier and on a floating tidal energy platform in the Waddenzee.

The Eastern Scheldt storm surge barrier is part of the famous Dutch Delta Works put in place to protect the Netherlands from flooding from the North Sea. The installation is the largest tidal energy project in the country, as well as the world’s largest commercial tidal installation of five turbines in an array.

The site consists of a 1.2 MW array of five turbines, and the special design enables the turbines to generate electricity during ebb and flood, demonstrating how future water defenses also can provide hydroelectric power.

As the world’s only turbine manufacturer capable of installing this type of multi-turbine installation, Tocardo can monitor the array in turbulent waters using the ADCPs and see how the turbines interact. The data will back the future upscaling and the commercial rollout of tidal projects across the world.

An example of this is the recent announcement of Tocardo’s first offshore tidal array with four one Megawatt Universal Floating Structures (UFS) in Canada’s Bay of Fundy, in collaboration with Minas Energy and International Marine Energy Inc (IME).

In late 2017, four 250kW-rated T2 bi-directional turbines were deployed in the Minas Passage within the bay. The turbines will be attached to Tocardo’s semi-submersible Universal Floating Platform Structure to form a 1MW system held in place by catenary mooring systems. Canada’s new turbine facility will also produce vital data and valuable experience with turbine installations that could set in motion a wave of investment and innovation, helping to catalyze further growth in the sector.

Kamminga said, “Tidal energy is at a really exciting stage, so it’s been amazing to contribute towards its development this early on. We’re thrilled to support a market that is still discovering itself and to help solve problems that no one has faced before. Tidal energy will one day contribute an important amount of the world’s energy needs, but first companies such as Tocardo must work to ensure the installations are able to offer the best performance possible. They are challenging projects, and these structures are massive; no one would even see these tiny ADCP instruments that play such a big role in optimizing the tidal energy outcomes.” 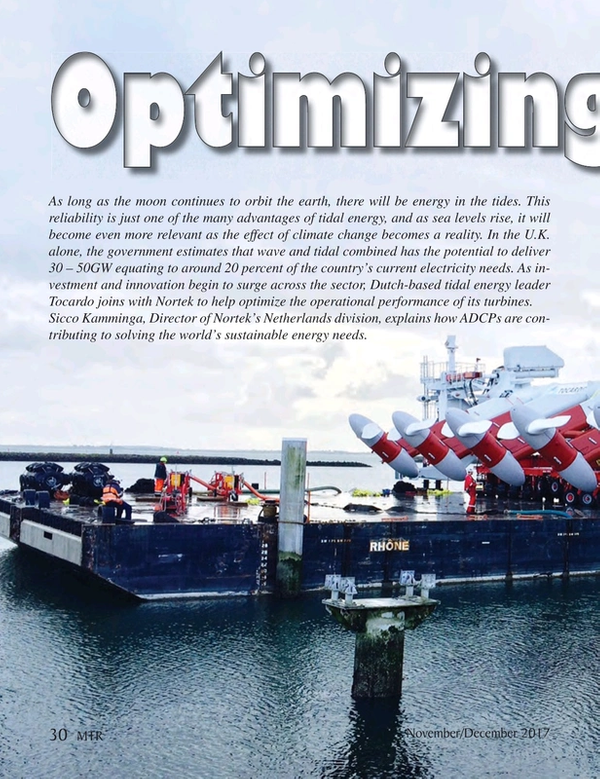