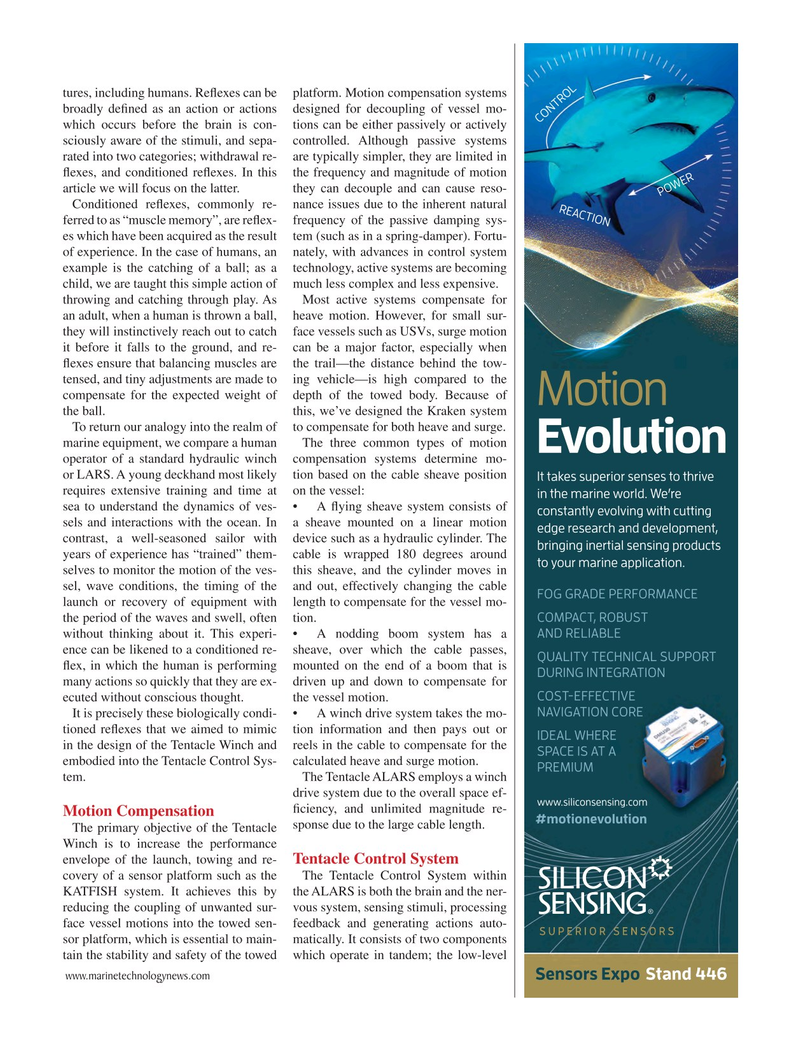 tures, including humans. Re? exes can be platform. Motion compensation systems broadly de? ned as an action or actions designed for decoupling of vessel mo- which occurs before the brain is con- tions can be either passively or actively sciously aware of the stimuli, and sepa- controlled. Although passive systems rated into two categories; withdrawal re- are typically simpler, they are limited in ? exes, and conditioned re? exes. In this the frequency and magnitude of motion article we will focus on the latter. they can decouple and can cause reso-

Conditioned re? exes, commonly re- nance issues due to the inherent natural ferred to as “muscle memory”, are re? ex- frequency of the passive damping sys- es which have been acquired as the result tem (such as in a spring-damper). Fortu- of experience. In the case of humans, an nately, with advances in control system example is the catching of a ball; as a technology, active systems are becoming child, we are taught this simple action of much less complex and less expensive.

throwing and catching through play. As Most active systems compensate for an adult, when a human is thrown a ball, heave motion. However, for small sur- they will instinctively reach out to catch face vessels such as USVs, surge motion it before it falls to the ground, and re- can be a major factor, especially when ? exes ensure that balancing muscles are the trail—the distance behind the tow- tensed, and tiny adjustments are made to ing vehicle—is high compared to the compensate for the expected weight of depth of the towed body. Because of the ball. this, we’ve designed the Kraken system

To return our analogy into the realm of to compensate for both heave and surge.

marine equipment, we compare a human The three common types of motion operator of a standard hydraulic winch compensation systems determine mo- or LARS. A young deckhand most likely tion based on the cable sheave position requires extensive training and time at on the vessel: sea to understand the dynamics of ves- • A ? ying sheave system consists of sels and interactions with the ocean. In a sheave mounted on a linear motion contrast, a well-seasoned sailor with device such as a hydraulic cylinder. The years of experience has “trained” them- cable is wrapped 180 degrees around selves to monitor the motion of the ves- this sheave, and the cylinder moves in sel, wave conditions, the timing of the and out, effectively changing the cable launch or recovery of equipment with length to compensate for the vessel mo- the period of the waves and swell, often tion. without thinking about it. This experi- • A nodding boom system has a ence can be likened to a conditioned re- sheave, over which the cable passes, ? ex, in which the human is performing mounted on the end of a boom that is many actions so quickly that they are ex- driven up and down to compensate for ecuted without conscious thought. the vessel motion.

It is precisely these biologically condi- • A winch drive system takes the mo- tioned re? exes that we aimed to mimic tion information and then pays out or in the design of the Tentacle Winch and reels in the cable to compensate for the embodied into the Tentacle Control Sys- calculated heave and surge motion. tem. The Tentacle ALARS employs a winch drive system due to the overall space ef- ? ciency, and unlimited magnitude re-

The primary objective of the Tentacle sponse due to the large cable length.

KATFISH system. It achieves this by the ALARS is both the brain and the ner- reducing the coupling of unwanted sur- vous system, sensing stimuli, processing face vessel motions into the towed sen- feedback and generating actions auto- sor platform, which is essential to main- matically. It consists of two components tain the stability and safety of the towed which operate in tandem; the low-level www.marinetechnologynews.com