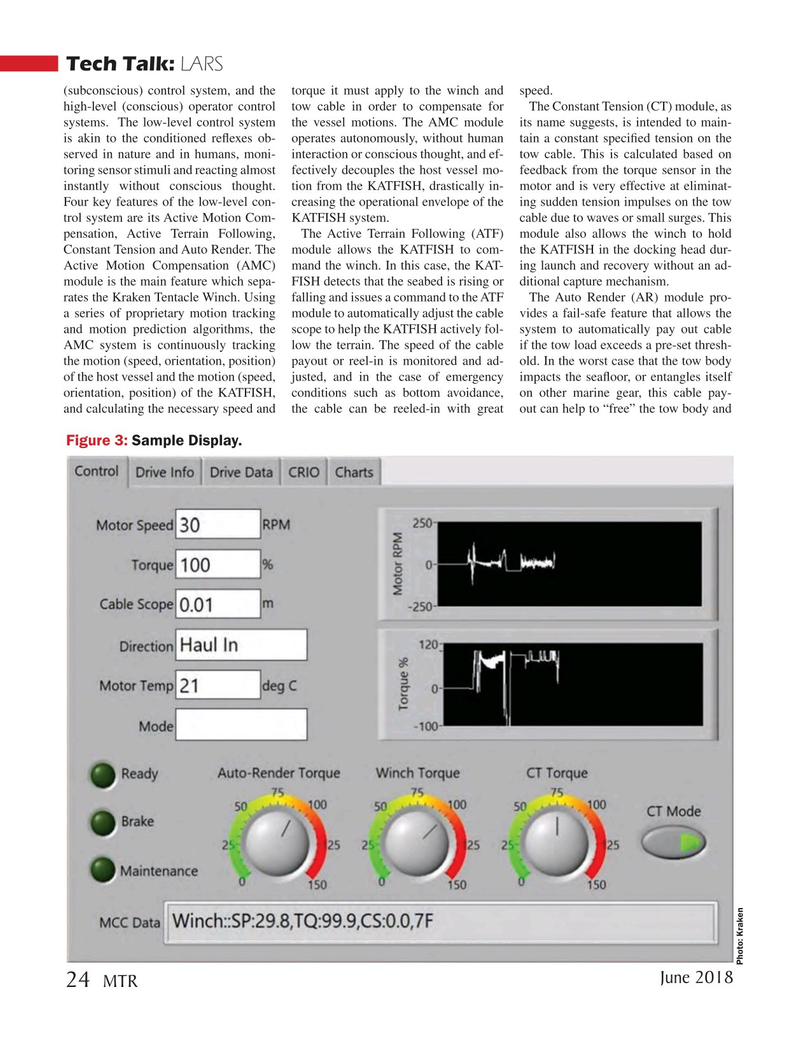 Tech Talk: LARS (subconscious) control system, and the torque it must apply to the winch and speed.

high-level (conscious) operator control tow cable in order to compensate for The Constant Tension (CT) module, as systems. The low-level control system the vessel motions. The AMC module its name suggests, is intended to main- is akin to the conditioned re? exes ob- operates autonomously, without human tain a constant speci? ed tension on the served in nature and in humans, moni- interaction or conscious thought, and ef- tow cable. This is calculated based on toring sensor stimuli and reacting almost fectively decouples the host vessel mo- feedback from the torque sensor in the instantly without conscious thought. tion from the KATFISH, drastically in- motor and is very effective at eliminat-

Constant Tension and Auto Render. The module allows the KATFISH to com- the KATFISH in the docking head dur-

Active Motion Compensation (AMC) mand the winch. In this case, the KAT- ing launch and recovery without an ad- module is the main feature which sepa- FISH detects that the seabed is rising or ditional capture mechanism.

rates the Kraken Tentacle Winch. Using falling and issues a command to the ATF The Auto Render (AR) module pro- a series of proprietary motion tracking module to automatically adjust the cable vides a fail-safe feature that allows the and motion prediction algorithms, the scope to help the KATFISH actively fol- system to automatically pay out cable

AMC system is continuously tracking low the terrain. The speed of the cable if the tow load exceeds a pre-set thresh- the motion (speed, orientation, position) payout or reel-in is monitored and ad- old. In the worst case that the tow body of the host vessel and the motion (speed, justed, and in the case of emergency impacts the sea? oor, or entangles itself orientation, position) of the KATFISH, conditions such as bottom avoidance, on other marine gear, this cable pay- and calculating the necessary speed and the cable can be reeled-in with great out can help to “free” the tow body and