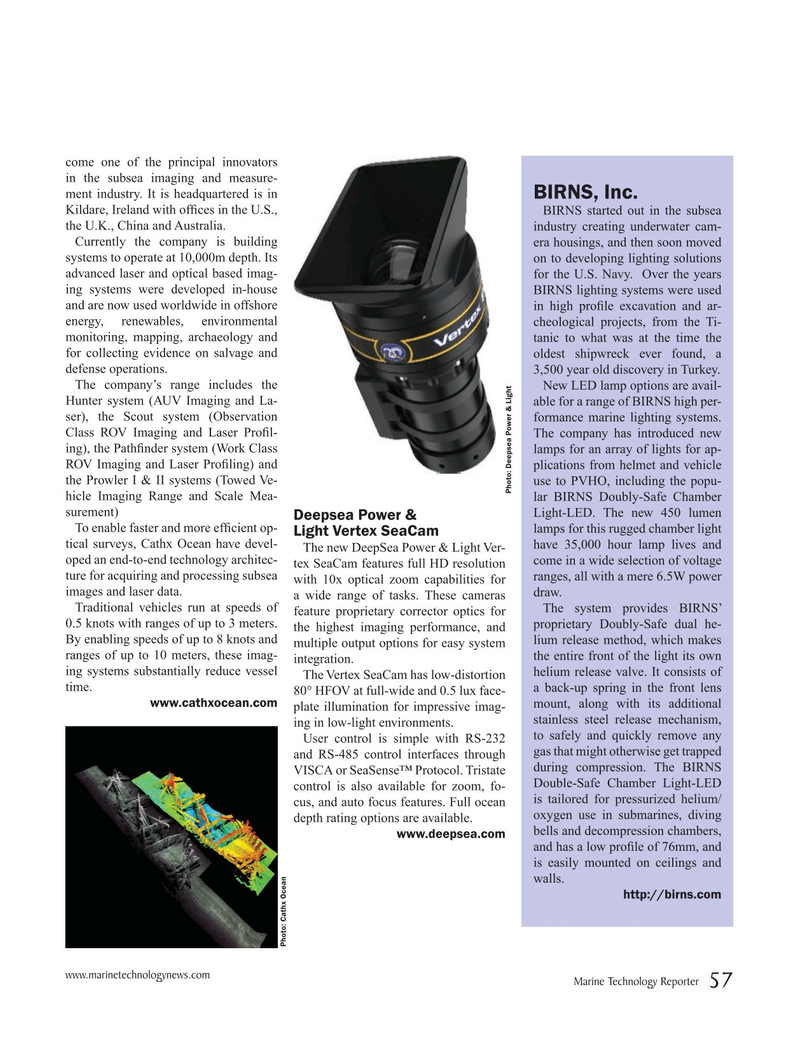 come one of the principal innovators in the subsea imaging and measure- ment industry. It is headquartered is in

Kildare, Ireland with of? ces in the U.S., BIRNS started out in the subsea the U.K., China and Australia. industry creating underwater cam-

Currently the company is building era housings, and then soon moved systems to operate at 10,000m depth. Its on to developing lighting solutions advanced laser and optical based imag- for the U.S. Navy. Over the years ing systems were developed in-house BIRNS lighting systems were used and are now used worldwide in offshore in high pro? le excavation and ar- energy, renewables, environmental cheological projects, from the Ti- monitoring, mapping, archaeology and tanic to what was at the time the for collecting evidence on salvage and oldest shipwreck ever found, a defense operations. 3,500 year old discovery in Turkey.

ROV Imaging and Laser Pro? ling) and plications from helmet and vehicle the Prowler I & II systems (Towed Ve- use to PVHO, including the popu-

The system provides BIRNS’ 0.5 knots with ranges of up to 3 meters. the highest imaging performance, and proprietary Doubly-Safe dual he-

By enabling speeds of up to 8 knots and multiple output options for easy system lium release method, which makes ranges of up to 10 meters, these imag- the entire front of the light its own integration.

The Vertex SeaCam has low-distortion time. a back-up spring in the front lens 80° HFOV at full-wide and 0.5 lux face- www.cathxocean.com mount, along with its additional plate illumination for impressive imag- stainless steel release mechanism, ing in low-light environments.

to safely and quickly remove any

User control is simple with RS-232 gas that might otherwise get trapped and RS-485 control interfaces through during compression. The BIRNS

bells and decompression chambers, www.deepsea.com and has a low pro? le of 76mm, and is easily mounted on ceilings and walls.