If we are going to store large volumes of carbon dioxide (CO2) in depleted oil and gas reservoirs beneath the seabed we need to be sure that, in the unlikely event of a leak, we can detect it.  A research expedition, carrying a world-first experiment designed to develop methods for the detection and monitoring of leaks, has just returned from the North Sea; it has been declared a great success.

Climate change, driven by increasing CO2 levels in the atmosphere, is now a well-established side-effect of human activities that is having profound effects on the Earth’s natural systems. While efforts are being made to reduce future sources of human-related CO2 production, such as from industry and transport, there is a parallel need to prevent the gas from existing activities entering the atmosphere. Carbon dioxide capture and storage (CCS), whereby CO2 is contained at source, transported and ultimately stored away from the atmosphere, is one such strategy. Putting the CO2 back from whence it came, deep beneath the seabed in depleted gas or oil reservoirs, seems a logical solution, but there are challenges.  To generate confidence in this approach, a priority is to be able to deal quickly with any leak, should it occur: detect it, to measure its strength and duration, predict any effects it may have on the environment, and seal it if necessary.

Previous laboratory and mesocosm-based research on the effects of CO2 on marine life has shown that it can change the pH of seawater and create localized ‘ocean acidification’ conditions, which appear to be detrimental to many types of benthic (seabed) life. A previous, shallow water experiment, the Quantifying and Monitoring Potential Ecosystem Impacts of Geological Carbon Storage (QICS) project, provided some clues as to the extent, duration and behavior of a CO2 plume from a simulated leak, while studies at natural seep sites have also provided crucial information. Now a larger experiment has been testing methods, equipment and sensors under real-life conditions in the rigorous environment of the UK’s North Sea. 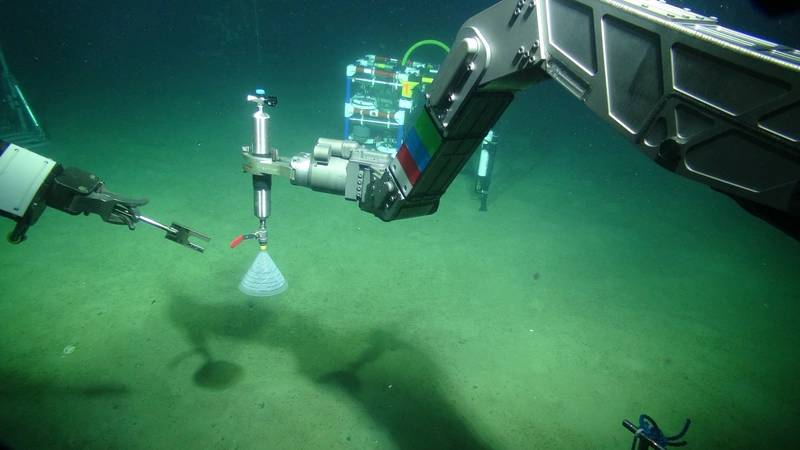 Collecting gas samples as they emerge from beneath the sediment. The use of an ROV during this delicate operation demonstrates that even small leaks can be sampled in harsh conditions. Image: Copyright STEMM-CCS Project

The Strategies for Environmental Monitoring of Marine Carbon Capture and Storage (STEMM-CCS) project is a European Union Horizon2020-funded research project. It brings together researchers from Germany, Norway, Austria and the UK, along with industry partner Shell, to develop the techniques and technology to detect traces of CO2 leaks if they occur in the marine environment, to observe how the gas behaves in sediments and the water column above, and predict how far leaks may spread and what impacts they might have - but this time in as near to ‘real’ conditions as possible. During May this year, a research expedition set sail from the UK’s National Oceanography Centre in Southampton, aboard the RRS James Cook. Once on station, close to Shell’s Goldeneye platform approximately 100km off the coast of Scotland and in 120m water depth, the experiment began. A pipe was robotically inserted into the seabed - the first time such an experiment has been attempted at depth in the open sea. The 1.5cm-diameter curved steel pipe was successfully positioned within the sediment to ensure its exit was three metres beneath the seabed surface. It sounds simple, but in order to achieve this, a bespoke ‘drill’ rig to push the pipe into the sediment was developed and built by Cellula Robotics in Canada. The pipe was then connected by a remotely operated vehicle (ROV) to a CO2 supply on the seabed, allowing gas to flow through the pipe into the sediments. Again, this sounds simple, but specially-designed gas cylinders housed in a second rig had to be built to withstand the tough salt-water environment of the North Sea.

Fortunately conditions remained calm during this operation and the science team on board breathed a sigh of relief as CO2 bubbles began to emerge from beneath the sediment. The idea was then to test how well an array of sensors, developed and built for the experiment, might perform.
Acoustic and optical instruments were deployed to detect the sound made by streams of bubbles or  spot them with cameras, while chemical sensors ‘sniffed out’  the CO2 and the minute amounts of inert chemical tracers it contained, so allowing the scientists to  differentiate this signal from any naturally occurring CO2. ROVs and autonomous underwater vehicles (AUVs) bearing other sensors completed the arsenal of technology employed. The team aboard were extremely pleased and gratified that the sensors and monitoring tools they were testing performed far better than expected. This has resulted in some surety that even very small releases of CO2 into a marine system could be detected, both in the dissolved phase and as bubbles. These results have clearly demonstrated the utility of combining a number of sensing and monitoring approaches to detect leaks from CCS reservoirs.

A second research ship, RV Poseidon, manned by a crew and science team from the GEOMAR Helmholtz Centre for Ocean Research in Kiel, Germany, hove to within sight of the Goldeneye platform and the RRS James Cook. Partners in the STEMM-CCS project, the GEOMAR team were engaged in more distant monitoring and seabed baseline studies linked to the experiment, combining expertise and facilities across European nations. 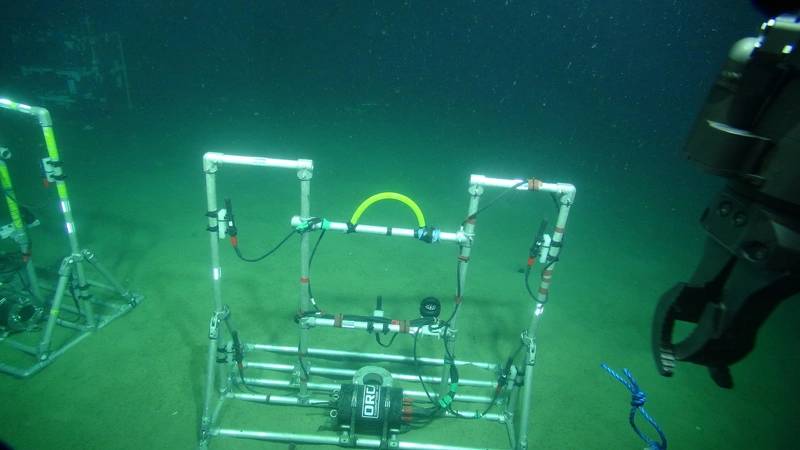 Hydrophone wall on the seabed, listens to the sound bubbles make as they emerge from the seabed and move through the water column. Image: Copyright STEMM-CCS Project

Professor Douglas Connelly, the NOC scientist who led the project, is delighted with the outcome: “Three years of hard work and innovative thinking have brought us to this exciting point in the STEMM-CCS project. This experiment was as near to a real leak as we could simulate and is the first time, anywhere in the world, it has been attempted. The North Sea can be a harsh environment and getting the pipe into the seabed, connected to a CO2 supply and producing a stream of gas was always going to be a challenge. This realistic scenario was critical for us to properly test the sensors that have been developed to give peace of mind in the future, that if a leak should occur, we can detect it quickly and precisely.

The STEMM-CCS cruise has been an incredible success, from a technical point of view. Placing 3 tonnes of CO2 on the seabed and releasing it in a controlled manner 3 m below the seabed, in order to demonstrate the high sensitivity that the new generation of marine sensors have in detecting the dissolved and bubbling gas, was no mean feat. The success of the experiment and the performance of the sensors gives us a step change in our confidence that in a real-world situation we have the capability to detect and monitor escape of CO2 from storage sites beneath the seabed”.

Although the ultimate aim of the experiment and the STEMM-CCS project as a whole is to develop sensors and methods for detecting and monitoring gas leakage in a real-world situation, there is also an educational aspect to it. Live from the cruise, postgraduate researcher Ben Roche (NOC) shared the excitement of a science research cruise, its challenges and successes with more than 200 school students from Southampton, England and Wales, via live links from the ship: “It was very rewarding chatting with the students while the scientific research was actually taking place, and I am fascinated to see how they use and analyse real-world data from the experiment in their curriculum studies.” Further outreach work is planned throughout the remainder of the rest of the year and full details of the cruise and the project as a whole can be found at www.stemm-ccs.eu

Kelvin Boot is a Science Communicator working with the project. 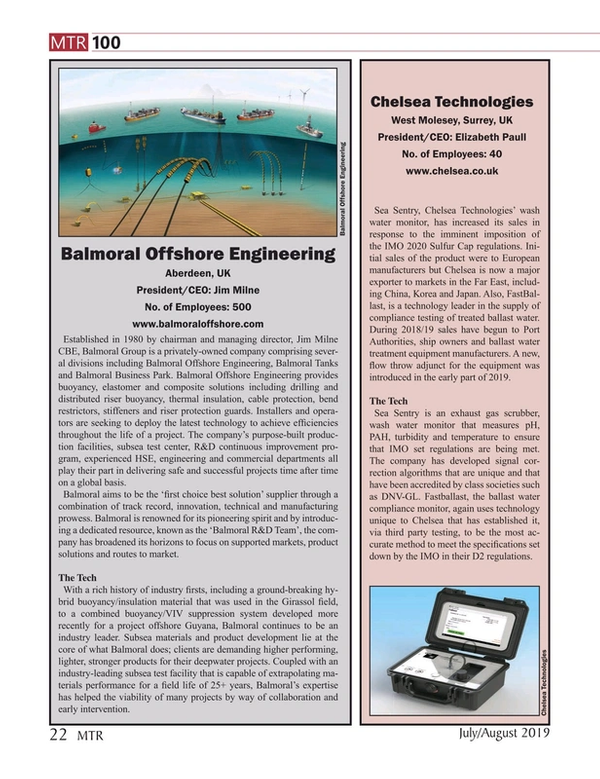