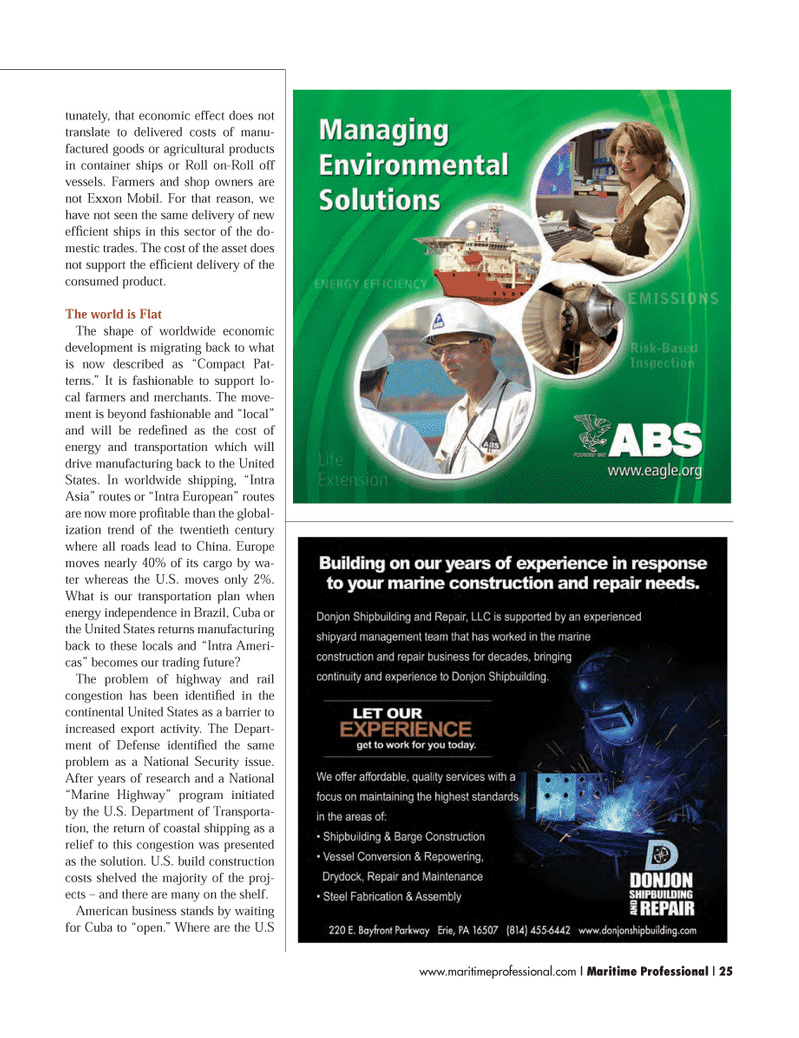 tunately, that economic effect does not translate to delivered costs of manu- factured goods or agricultural products in container ships or Roll on-Roll off vessels. Farmers and shop owners are not Exxon Mobil. For that reason, we have not seen the same delivery of new efÞ cient ships in this sector of the do- mestic trades. The cost of the asset does not support the efÞ cient delivery of the consumed product.The world is Flat The shape of worldwide economic development is migrating back to what is now described as ÒCompact Pat- terns.Ó It is fashionable to support lo- cal farmers and merchants. The move- ment is beyond fashionable and ÒlocalÓ and will be redeÞ ned as the cost of energy and transportation which will drive manufacturing back to the United States. In worldwide shipping, ÒIntra AsiaÓ routes or ÒIntra EuropeanÓ routes are now more proÞ table than the global- ization trend of the twentieth century where all roads lead to China. Europe moves nearly 40% of its cargo by wa- ter whereas the U.S. moves only 2%. What is our transportation plan when energy independence in Brazil, Cuba or the United States returns manufacturing back to these locals and ÒIntra Ameri- casÓ becomes our trading future? The problem of highway and rail congestion has been identiÞ ed in the continental United States as a barrier to increased export activity. The Depart- ment of Defense identiÞ ed the same problem as a National Security issue. After years of research and a National ÒMarine HighwayÓ program initiated by the U.S. Department of Transporta- tion, the return of coastal shipping as a relief to this congestion was presented as the solution. U.S. build construction costs shelved the majority of the proj- ects Ð and there are many on the shelf. American business stands by waiting for Cuba to Òopen.Ó Where are the U.S www.maritimeprofessional.com | Maritime Professional | 25MP #4 18-33.indd 25MP #4 18-33.indd 2511/12/2012 9:39:00 AM11/12/2012 9:39:00 AM