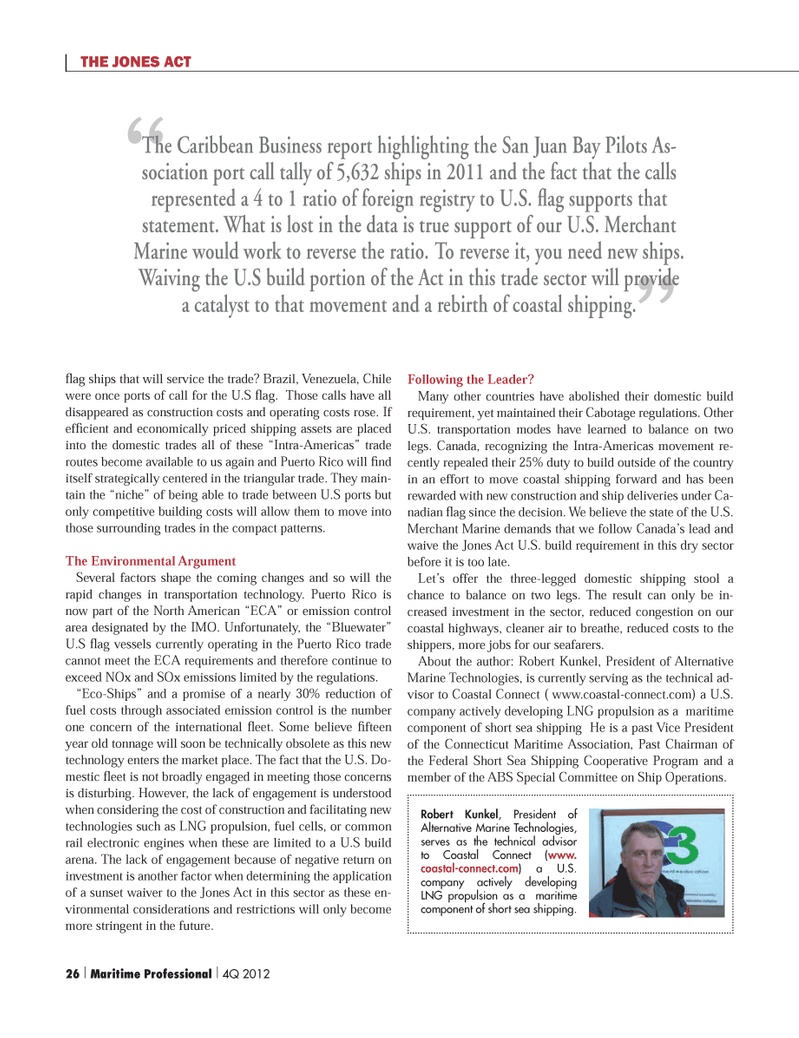 ß ag ships that will service the trade? Brazil, Venezuela, Chile were once ports of call for the U.S ß ag. Those calls have all disappeared as construction costs and operating costs rose. If efÞ cient and economically priced shipping assets are placed into the domestic trades all of these ÒIntra-AmericasÓ trade routes become available to us again and Puerto Rico will Þ nd itself strategically centered in the triangular trade. They main- tain the ÒnicheÓ of being able to trade between U.S ports but only competitive building costs will allow them to move into those surrounding trades in the compact patterns.The Environmental Argument Several factors shape the coming changes and so will the rapid changes in transportation technology. Puerto Rico is now part of the North American ÒECAÓ or emission control area designated by the IMO. Unfortunately, the ÒBluewaterÓ U.S ß ag vessels currently operating in the Puerto Rico trade cannot meet the ECA requirements and therefore continue to exceed NOx and SOx emissions limited by the regulations. ÒEco-ShipsÓ and a promise of a nearly 30% reduction of fuel costs through associated emission control is the number one concern of the international ß eet. Some believe Þ fteen year old tonnage will soon be technically obsolete as this new technology enters the market place. The fact that the U.S. Do- mestic ß eet is not broadly engaged in meeting those concerns is disturbing. However, the lack of engagement is understood when considering the cost of construction and facilitating new technologies such as LNG propulsion, fuel cells, or common rail electronic engines when these are limited to a U.S build arena. The lack of engagement because of negative return on investment is another factor when determining the application of a sunset waiver to the Jones Act in this sector as these en- vironmental considerations and restrictions will only become more stringent in the future. Following the Leader? Many other countries have abolished their domestic build requirement, yet maintained their Cabotage regulations. Other U.S. transportation modes have learned to balance on two legs. Canada, recognizing the Intra-Americas movement re- cently repealed their 25% duty to build outside of the country in an effort to move coastal shipping forward and has been rewarded with new construction and ship deliveries under Ca- nadian ß ag since the decision. We believe the state of the U.S. Merchant Marine demands that we follow CanadaÕs lead and waive the Jones Act U.S. build requirement in this dry sector before it is too late. LetÕs offer the three-legged domestic shipping stool a chance to balance on two legs. The result can only be in- creased investment in the sector, reduced congestion on our coastal highways, cleaner air to breathe, reduced costs to the shippers, more jobs for our seafarers. About the author: Robert Kunkel, President of Alternative Marine Technologies, is currently serving as the technical ad- visor to Coastal Connect ( www.coastal-connect.com) a U.S. company actively developing LNG propulsion as a maritime component of short sea shipping He is a past Vice President of the Connecticut Maritime Association, Past Chairman of the Federal Short Sea Shipping Cooperative Program and a member of the ABS Special Committee on Ship Operations. THE JONES ACT Robert Kunkel , President of Alternative Marine Technologies, serves as the technical advisor to Coastal Connect (www. coastal-connect.com) a U.S. company actively developing LNG propulsion as a maritime component of short sea shipping. ??The Caribbean Business report highlighting the San Juan Bay Pilots As- sociation port call tally of 5,632 ships in 2011 and the fact that the calls represented a 4 to 1 ratio of foreign registry to U.S. ß ag supports that statement. What is lost in the data is true support of our U.S. Merchant Marine would work to reverse the ratio. To reverse it, you need new ships. Waiving the U.S build portion of the Act in this trade sector will provide a catalyst to that movement and a rebirth of coastal shipping. 26 | Maritime Professional | 4Q 2012MP #4 18-33.indd 26MP #4 18-33.indd 2611/12/2012 9:39:43 AM11/12/2012 9:39:43 AM