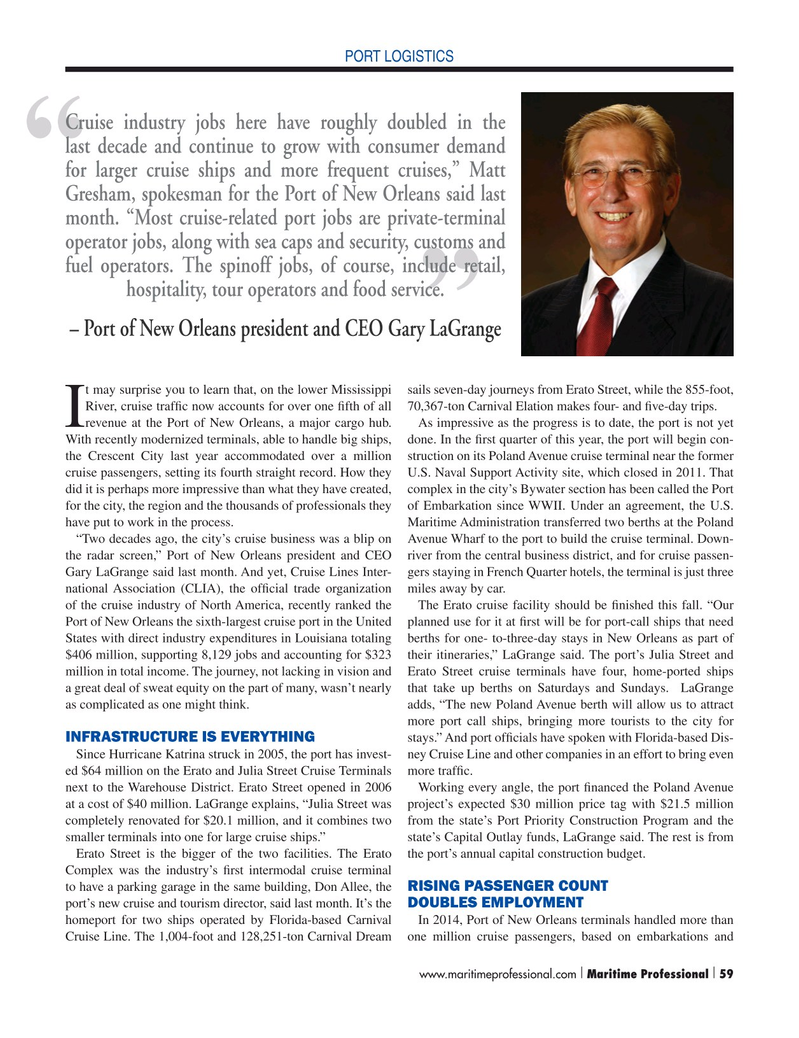 Gresham, spokesman for the Port of New Orleans said last month. “Most cruise-related port jobs are private-terminal operator jobs, along with sea caps and security, customs and fuel operators. The spinoff jobs, of course, include retail, hospitality, tour operators and food service. ” – Port of New Orleans president and CEO Gary LaGrange t may surprise you to learn that, on the lower Mississippi sails seven-day journeys from Erato Street, while the 855-foot,

River, cruise traf? c now accounts for over one ? fth of all 70,367-ton Carnival Elation makes four- and ? ve-day trips.

Irevenue at the Port of New Orleans, a major cargo hub. As impressive as the progress is to date, the port is not yet

With recently modernized terminals, able to handle big ships, done. In the ? rst quarter of this year, the port will begin con- the Crescent City last year accommodated over a million struction on its Poland Avenue cruise terminal near the former cruise passengers, setting its fourth straight record. How they U.S. Naval Support Activity site, which closed in 2011. That did it is perhaps more impressive than what they have created, complex in the city’s Bywater section has been called the Port for the city, the region and the thousands of professionals they of Embarkation since WWII. Under an agreement, the U.S. have put to work in the process. Maritime Administration transferred two berths at the Poland “Two decades ago, the city’s cruise business was a blip on Avenue Wharf to the port to build the cruise terminal. Down- the radar screen,” Port of New Orleans president and CEO river from the central business district, and for cruise passen-

of the cruise industry of North America, recently ranked the The Erato cruise facility should be ? nished this fall. “Our

Port of New Orleans the sixth-largest cruise port in the United planned use for it at ? rst will be for port-call ships that need

States with direct industry expenditures in Louisiana totaling berths for one- to-three-day stays in New Orleans as part of $406 million, supporting 8,129 jobs and accounting for $323 their itineraries,” LaGrange said. The port’s Julia Street and million in total income. The journey, not lacking in vision and Erato Street cruise terminals have four, home-ported ships a great deal of sweat equity on the part of many, wasn’t nearly that take up berths on Saturdays and Sundays. LaGrange as complicated as one might think. adds, “The new Poland Avenue berth will allow us to attract more port call ships, bringing more tourists to the city for stays.” And port of? cials have spoken with Florida-based Dis-

Since Hurricane Katrina struck in 2005, the port has invest- ney Cruise Line and other companies in an effort to bring even ed $64 million on the Erato and Julia Street Cruise Terminals more traf? c.

next to the Warehouse District. Erato Street opened in 2006 Working every angle, the port ? nanced the Poland Avenue at a cost of $40 million. LaGrange explains, “Julia Street was project’s expected $30 million price tag with $21.5 million completely renovated for $20.1 million, and it combines two from the state’s Port Priority Construction Program and the smaller terminals into one for large cruise ships.” state’s Capital Outlay funds, LaGrange said. The rest is from

Erato Street is the bigger of the two facilities. The Erato the port’s annual capital construction budget.

Complex was the industry’s ? rst intermodal cruise terminal to have a parking garage in the same building, Don Allee, the

Cruise Line. The 1,004-foot and 128,251-ton Carnival Dream one million cruise passengers, based on embarkations and www.maritimeprofessional.com Maritime Professional 59| |