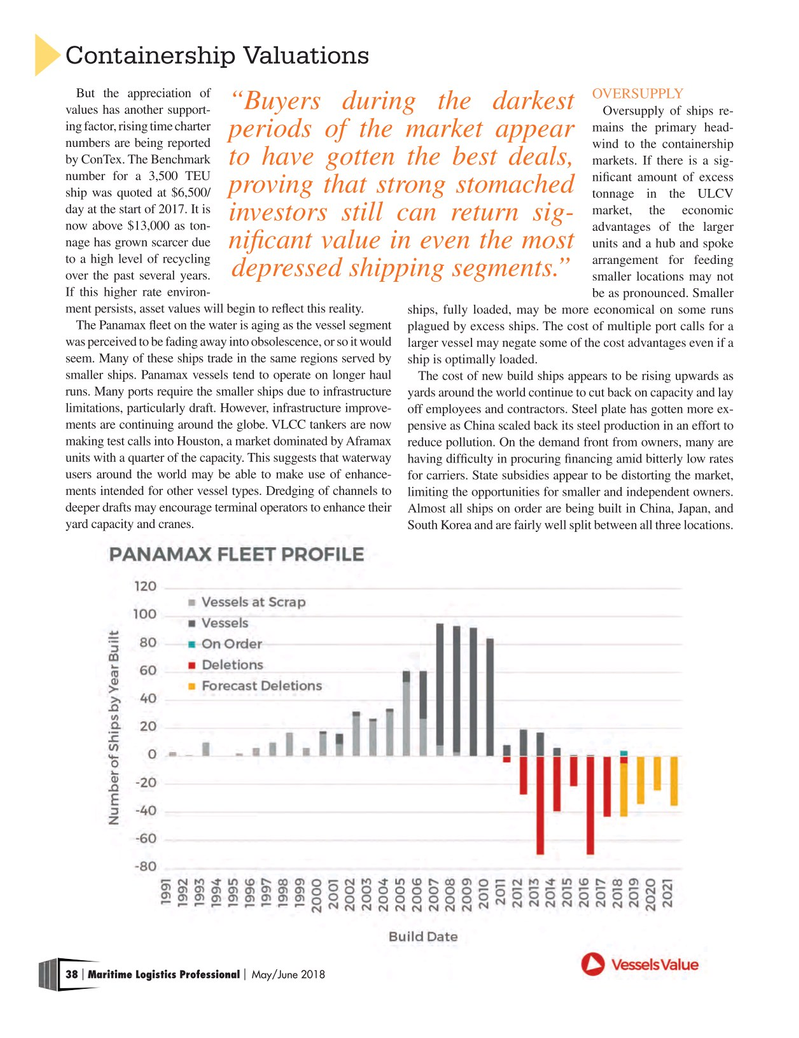 But the appreciation of

OVERSUPPLY “Buyers during the darkest values has another support- Oversupply of ships re- ing factor, rising time charter mains the primary head- periods of the market appear numbers are being reported wind to the containership by ConTex. The Benchmark markets. If there is a sig- to have gotten the best deals, number for a 3,500 TEU nifcant amount of excess proving that strong stomached ship was quoted at $6,500/ tonnage in the ULCV day at the start of 2017. It is market, the economic investors still can return sig- now above $13,000 as ton- advantages of the larger nage has grown scarcer due units and a hub and spoke nifcant value in even the most to a high level of recycling arrangement for feeding depressed shipping segments.” over the past several years. smaller locations may not

If this higher rate environ- be as pronounced. Smaller ment persists, asset values will begin to refect this reality. ships, fully loaded, may be more economical on some runs

The Panamax feet on the water is aging as the vessel segment plagued by excess ships. The cost of multiple port calls for a was perceived to be fading away into obsolescence, or so it would larger vessel may negate some of the cost advantages even if a seem. Many of these ships trade in the same regions served by ship is optimally loaded. smaller ships. Panamax vessels tend to operate on longer haul The cost of new build ships appears to be rising upwards as runs. Many ports require the smaller ships due to infrastructure yards around the world continue to cut back on capacity and lay limitations, particularly draft. However, infrastructure improve- off employees and contractors. Steel plate has gotten more ex- ments are continuing around the globe. VLCC tankers are now pensive as China scaled back its steel production in an effort to making test calls into Houston, a market dominated by Aframax reduce pollution. On the demand front from owners, many are units with a quarter of the capacity. This suggests that waterway having diffculty in procuring fnancing amid bitterly low rates users around the world may be able to make use of enhance- for carriers. State subsidies appear to be distorting the market, ments intended for other vessel types. Dredging of channels to limiting the opportunities for smaller and independent owners. deeper drafts may encourage terminal operators to enhance their Almost all ships on order are being built in China, Japan, and yard capacity and cranes. South Korea and are fairly well split between all three locations. 38 Maritime Logistics Professional May/June 2018 | |