When Jonathan Daniels, executive director of the Mississippi State Port Authority at Gulfport spoke to the audience at the annual state of the port luncheon July 27, 2018 at the newly rebuilt Island View Casino, he had a lot to offer in terms of jobs. And he had two aces in the hole: SeaOne, an untested compressed liquefied gas company and Yilport, a terminal company operated by an ambitious Turkish port developer. Both had letters of intent dating back two years with much to do.

As has been the case since before Daniels took over from Don Allee in 2013, the Port of Gulfport is under a federal mandate to create 1,300 low and middle-income jobs by 2021 in exchange for $570 million in HUD (Housing and Urban Development) grants that were shifted to port reconstruction from regional development after 2005’s Hurricane Katrina.

Until Hurricane Katrina hit with 125 mph winds and the unimaginable force of a 25-foot storm surge in 2005, the Port of Gulfport, Mississippi was a dynamic force, importing Chiquita bananas and Dole fruit from Central America and exporting wood products, and Tyson frozen chicken parts to Russia.

Confronting ‘Bad Luck’
Gulfport the town, with a population of about 72,000 people, had been crushed by bad luck that began with Katrina but cascaded with the subsequent arrival of Hurricanes Gustav and Isaac and the BP oil spill in 2010. The casino was leveled, the recreational and commercial ports were destroyed and most businesses near the coast were erased. The Port of Gulfport was in equally bad shape.

Approximately 430,000 square feet of waterfront warehouses and freezer facilities were completely destroyed by Hurricane Katrina. The one container gantry crane, the bulk vessel loader, banana conveyer system and support buildings were lost. The wharf area on the West Pier was severely damaged and unusable including approximately 2,100 linear feet of berthing area and 420,000 square feet of wharf deck.

In December 2007, almost two years later, the Mississippi Development Authority (MDA) finally requested funding from the U.S. Department of Housing and Urban Development (HUD) to provide financial assistance to support the restoration of the region as well as for the restoration and expansion of the Port of Gulfport. It was a mixed message that created painful conflict between those who sought restoration of the region, meaning housing and jobs mostly for the poor, and reconstruction of the port to create those jobs.

In 2007, then-Governor Gov. Haley Barbour pitched a "port of the future" with a 50-foot-deep channel to lure Super-Post-Panamax ships sailing through the soon-to-be-completed Panama Canal. To accomplish that goal, Barbour orchestrated the transfer of the $570 million in federal housing money to the Port of Gulfport, despite criticism that the money would have been better spent building and repairing houses destroyed by Katrina. In exchange, HUD demanded 1,300 new, permanent low and middle-income producing jobs at the port by 2021.

The American Civil Liberties Union (ACLU) and the Mississippi Center for Justice (MCJ) filed suit in 2008 against HUD and the State of Mississippi. It was settled in November 2010 with a $132 million settlement with the MCJ slated to be used for housing.

In October 2012 at a Port of Gulfport commission meeting long-time port director Don Allee announced he would leave the next month. He had been criticized when he disclosed that the $570 million in HUD grants did not include the cost of dredging the port to 50 feet.

Daniels Hired
On April 29, 2013, the Mississippi State Port Authority board of commissioners hired Jonathan Daniels as the new executive director for the Port at Gulfport. He was recruited from the upstate New York, Port of Oswego in large part because of his background in economic development. Before taking the job in Oswego, Daniels was executive director of the Eastern Maine Development Corporation, which included a six county region in the state of Maine.

In November 2017, the Army Corps of Engineers finally released the Record of Decision (ROD) for the Port of Gulfport Expansion Project. That decision paves the way for a 282-acre dredge and fill program for further expansion of the port’s operations. With the permit in-hand, the port is now evaluating options to complete that dredge and fill project.

By the end of 2017 Daniels had rebuilt the port and more. With the completion of a separate 84-acre addition, the Port of Gulfport now spans 300 acres. The comprehensive restoration program includes the construction of wharfs, terminals, container storage, three new ship-to-shore gantry cranes, and intermodal container transfer facilities. It offers a 36-foot-deep by 250-foot-wide channel and a 1,320-foot turning basin.

Where nothing was left standing after Katrina, the port one-by-one retained tenants and attracted others as it rebuilt. They include Chiquita, Dole Food Company, Crowley Maritime Corporation, Chemours, McDermott International, Inc., Topship, LLC, and The University of Southern Mississippi. The Port also has one non-maritime tenant, the rebuilt Island View Casino Resort.

McDermott International is locating pipeline-finishing operations on the East Pier of the port. The new shipyard operated by Topship, a unit of Edison Chouest Offshore, builds service and supply vessels for the oil and gas industry.

Diversification
Since his arrival in April 2103, Daniels said that the Port has evolved from a shipping and cargo operation to a conversion port, where raw materials are being produced into finished products.

“We were that Banana Port on the Coast of Mississippi, which is still a cornerstone of what we do. We are the nation’s second largest green fruit import facility, but you look at the diversification now,” said Daniels. He then added, “Throw in there the fact that we are one of seventeen strategic ports in the U.S. to be able to handle military cargo, and this port now becomes as diverse as any large scale facility you see anywhere in the United States. So we’re extremely proud of what we’ve been able to do.”

Daniels is confident that a final site expansion engineering design will be complete within the year. That, he says, will open the doors to more employment opportunities for Gulf Coast residents as the project gets off the ground. The estimated cost of the expansion is three-quarters of a billion dollars.

“We’re at 527 (jobs)” said port director Daniels, at the July state of the port session. “The majority of those, by 69 almost 70 percent, fall in the low to moderate income category.” That may seem a long way away from the 1,300 jobs required by HUD in exchange for the $570 million grant for rebuilding and expansion. But Daniels stated that he has confidence new tenants would come online.

“The Topship facility at the inland port should open by the end of this year. And after that, the Port of Gulfport has three years to meet that job requirement.” Daniels says he'll be able to meet that goal and beyond. “We’ve always looked at that as kind of the floor, and we want to be able to build upon that,” Daniels added.

Rolls First Ace
Less than three weeks after the State of the Port, on August 16, 2018, Daniels rolled his first ace: SeaOne, a compressed gas liquids (CGL) start up from Houston, Texas, that two years earlier had signed a MOU and lease option agreement with Gulfport finally had secured federal approval and signed a contract with Samsung Heavy Industries Co. to build twelve Articulated Tug/Barge vessels.

SeaOne had already secured an Order of U.S. Department of Energy (DOE) Export Order for 30-years. With export permit in hand and pending a final investment decision, SeaOne completed its pre-project development work and front-end engineering and design for the project at Gulfport.
Now, according to Kimberly Aguillard, Port of Gulfport media and marketing manager, SeaOne has 180 days to prove it has the funding or it loses its lease option. Assuming the financing is approved, SeaOne will build a first of its kind plant at Gulfport featuring SeaOne’s patented CGL technology and systems that includes the CGL containment system. At Gulfport, SeaOne Phase 1 capital expenses are currently estimated to be $450 million and at Phase 4, an estimated $1.6 billion investment.

SeaOne's patented CGL process includes the manufacture of a solvated solution by chilling, pressurizing, and combining natural gas and NGLs. Ethane, propane, butane, isobutane, pentanes, and some heavier hydrocarbons are often referred to as natural gas liquids or NGLs. The liquids will be processed through a plant to separate the heavier hydrocarbon liquids from the natural gas stream. The final solvated CGL product is to be shipped by newly designed Articulated Tug and Barges (AT/B) to international markets in the Caribbean and Central America including the Dominican Republic, Panama, Costa Rica, Colombia, El Salvador, Guatemala, Honduras, Mexico and US Territories to include Puerto Rico, and the USVI.

The planned rich gas and natural gas liquids (NGLs) being exported will provide rich gas for power plants and also provide propane and Liquid Petroleum Gases (LPGs) for household and other uses. Approximately 92 percent of the current power generation in those markets relies upon oil-based fuels, while households generally use natural gas liquids for cooking and heating, according to SeaOne.

The 260-meter AT/B marine vessels will be the world’s largest and most powerful AT/B’s. The CGL Containment System is treated as an independent cargo and is not integral to the vessel design. The AT/B cargo holds will be kept at a temperature of minus 40ºF/C while the containment system is full resulting in no sloshing or boil off and no retention of a gas blanket after offloading of the cargo, SeaOne said.

The ABS-classed AT/B’s, designed by Ocean Tug & Barge Engineering Corp., will fly the flag of the Republic of the Marshall Islands, according so SeaOne.

Forrest Hoglund, SeaOne's Chairman and CEO, stated, "The prosperity of many Caribbean, Central and South American countries is stymied by challenges related to expenditures on fuel and power generation that far outweigh other developed parts of the world. SeaOne's technology and know-how solves this challenge through the use of the company's patented technology that allows, for the first time, the importation of low-cost U.S. natural gas and NGLs in a single liquid cargo to regional customers who -- for economic, environmental and regulatory reasons – are compelled to reduce their dependence on oil. We are pleased in the strong customer interest from key Caribbean and Central American countries to date, and are especially gratified that CG/LA has recognized SeaOne as the top regional infrastructure project for 2018."

As for the Yilport letter of intent and negotiations regarding the potential location of a global terminal at Gulfport, Aguillard the port media spokesperson said, “Director Daniels is actively involved in those negotiations and expects an answer by the end of the year.” She said the 280 acres of new dredge and fill to the south of the port, which has been approved by the federal government but not yet dredged, is central to those discussions.

“As we continue discussions with Yilport, the Port of Gulfport has a unique opportunity to evaluate a private-public partnership (P3) that could lead to a significant investment in additional infrastructure and provide both parties with increased global coverage,” said  Daniels in an earlier prepared statement.

According to the Chairman of Yilport Holding, Robert Yuksel Yildirim, “We see a great potential to feed volume, particularly refrigerated goods, to Gulfport from YilPort terminals in Ecuador, Peru and Latin America to reach the USA Midwest. There is further potential in leveraging the company’s trading subsidiary to handle containerized liquid and bulk products out of the US Gulf Coast region for small and medium-sized shippers.” More than that, Gulfport has served notice that it is, in fact, back. But, this is just the beginning.

Rick Eyerdam is an award winning journalist and editor. Formerly, he was Editor of Florida Shipper Magazine. Additionally, he was Executive Director of the Miami River Marine Group and Captain of the Port of the Miami River. He is a graduate of Florida State University with majors in English and Government. His articles have appeared in myriad shipping magazines and newspapers since 1970.

This article first appeared in the September/October edition of Maritime Logistics Professional magazine. 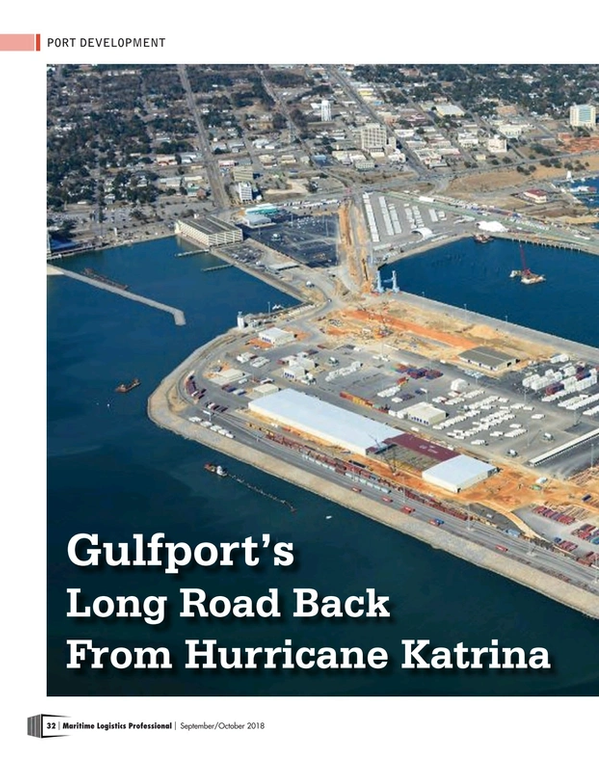 Other stories from Sep/Oct 2018 issue