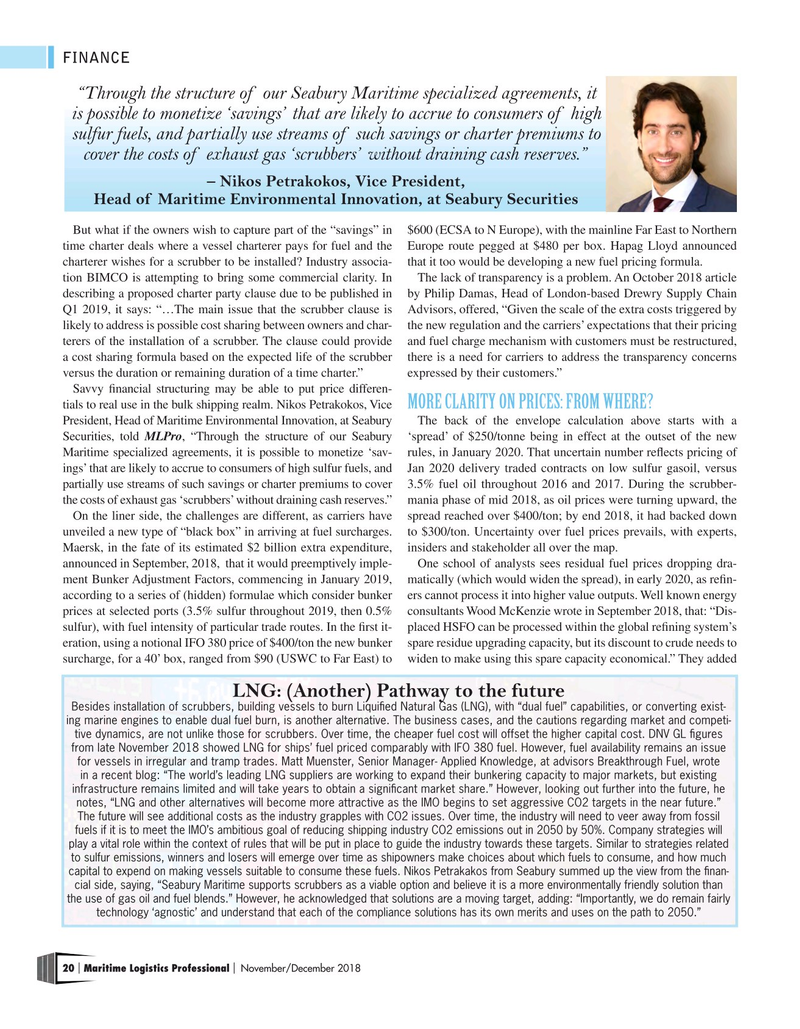 FINANCE “Through the structure of our Seabury Maritime specialized agreements, it is possible to monetize ‘savings’ that are likely to accrue to consumers of high sulfur fuels, and partially use streams of such savings or charter premiums to cover the costs of exhaust gas ‘scrubbers’ without draining cash reserves.” – Nikos Petrakokos, Vice President,

But what if the owners wish to capture part of the “savings” in $600 (ECSA to N Europe), with the mainline Far East to Northern time charter deals where a vessel charterer pays for fuel and the Europe route pegged at $480 per box. Hapag Lloyd announced charterer wishes for a scrubber to be installed? Industry associa- that it too would be developing a new fuel pricing formula.

tion BIMCO is attempting to bring some commercial clarity. In The lack of transparency is a problem. An October 2018 article describing a proposed charter party clause due to be published in by Philip Damas, Head of London-based Drewry Supply Chain

Q1 2019, it says: “…The main issue that the scrubber clause is Advisors, offered, “Given the scale of the extra costs triggered by likely to address is possible cost sharing between owners and char- the new regulation and the carriers’ expectations that their pricing terers of the installation of a scrubber. The clause could provide and fuel charge mechanism with customers must be restructured, a cost sharing formula based on the expected life of the scrubber there is a need for carriers to address the transparency concerns versus the duration or remaining duration of a time charter.” expressed by their customers.”

Savvy fnancial structuring may be able to put price differen-

MORE CLARITY ON PRICES: FROM WHERE?

tials to real use in the bulk shipping realm. Nikos Petrakokos, Vice

President, Head of Maritime Environmental Innovation, at Seabury The back of the envelope calculation above starts with a

Securities, told MLPro, “Through the structure of our Seabury ‘spread’ of $250/tonne being in effect at the outset of the new

Maritime specialized agreements, it is possible to monetize ‘sav- rules, in January 2020. That uncertain number refects pricing of ings’ that are likely to accrue to consumers of high sulfur fuels, and Jan 2020 delivery traded contracts on low sulfur gasoil, versus partially use streams of such savings or charter premiums to cover 3.5% fuel oil throughout 2016 and 2017. During the scrubber- the costs of exhaust gas ‘scrubbers’ without draining cash reserves.” mania phase of mid 2018, as oil prices were turning upward, the

On the liner side, the challenges are different, as carriers have spread reached over $400/ton; by end 2018, it had backed down unveiled a new type of “black box” in arriving at fuel surcharges. to $300/ton. Uncertainty over fuel prices prevails, with experts,

Maersk, in the fate of its estimated $2 billion extra expenditure, insiders and stakeholder all over the map. announced in September, 2018, that it would preemptively imple- One school of analysts sees residual fuel prices dropping dra- ment Bunker Adjustment Factors, commencing in January 2019, matically (which would widen the spread), in early 2020, as refn- according to a series of (hidden) formulae which consider bunker ers cannot process it into higher value outputs. Well known energy prices at selected ports (3.5% sulfur throughout 2019, then 0.5% consultants Wood McKenzie wrote in September 2018, that: “Dis- sulfur), with fuel intensity of particular trade routes. In the frst it- placed HSFO can be processed within the global refning system’s eration, using a notional IFO 380 price of $400/ton the new bunker spare residue upgrading capacity, but its discount to crude needs to surcharge, for a 40’ box, ranged from $90 (USWC to Far East) to widen to make using this spare capacity economical.” They added

LNG: (Another) Pathway to the future

Besides installation of scrubbers, building vessels to burn Liquifed Natural Gas (LNG), with “dual fuel” capabilities, or converting exist- ing marine engines to enable dual fuel burn, is another alternative. The business cases, and the cautions regarding market and competi- tive dynamics, are not unlike those for scrubbers. Over time, the cheaper fuel cost will offset the higher capital cost. DNV GL fgures from late November 2018 showed LNG for ships’ fuel priced comparably with IFO 380 fuel. However, fuel availability remains an issue for vessels in irregular and tramp trades. Matt Muenster, Senior Manager- Applied Knowledge, at advisors Breakthrough Fuel, wrote in a recent blog: “The world’s leading LNG suppliers are working to expand their bunkering capacity to major markets, but existing infrastructure remains limited and will take years to obtain a signifcant market share.” However, looking out further into the future, he notes, “LNG and other alternatives will become more attractive as the IMO begins to set aggressive CO2 targets in the near future.”

The future will see additional costs as the industry grapples with CO2 issues. Over time, the industry will need to veer away from fossil fuels if it is to meet the IMO’s ambitious goal of reducing shipping industry CO2 emissions out in 2050 by 50%. Company strategies will play a vital role within the context of rules that will be put in place to guide the industry towards these targets. Similar to strategies related to sulfur emissions, winners and losers will emerge over time as shipowners make choices about which fuels to consume, and how much capital to expend on making vessels suitable to consume these fuels. Nikos Petrakakos from Seabury summed up the view from the fnan- cial side, saying, “Seabury Maritime supports scrubbers as a viable option and believe it is a more environmentally friendly solution than the use of gas oil and fuel blends.” However, he acknowledged that solutions are a moving target, adding: “Importantly, we do remain fairly technology ‘agnostic’ and understand that each of the compliance solutions has its own merits and uses on the path to 2050.” 20 Maritime Logistics Professional November/December 2018 | |