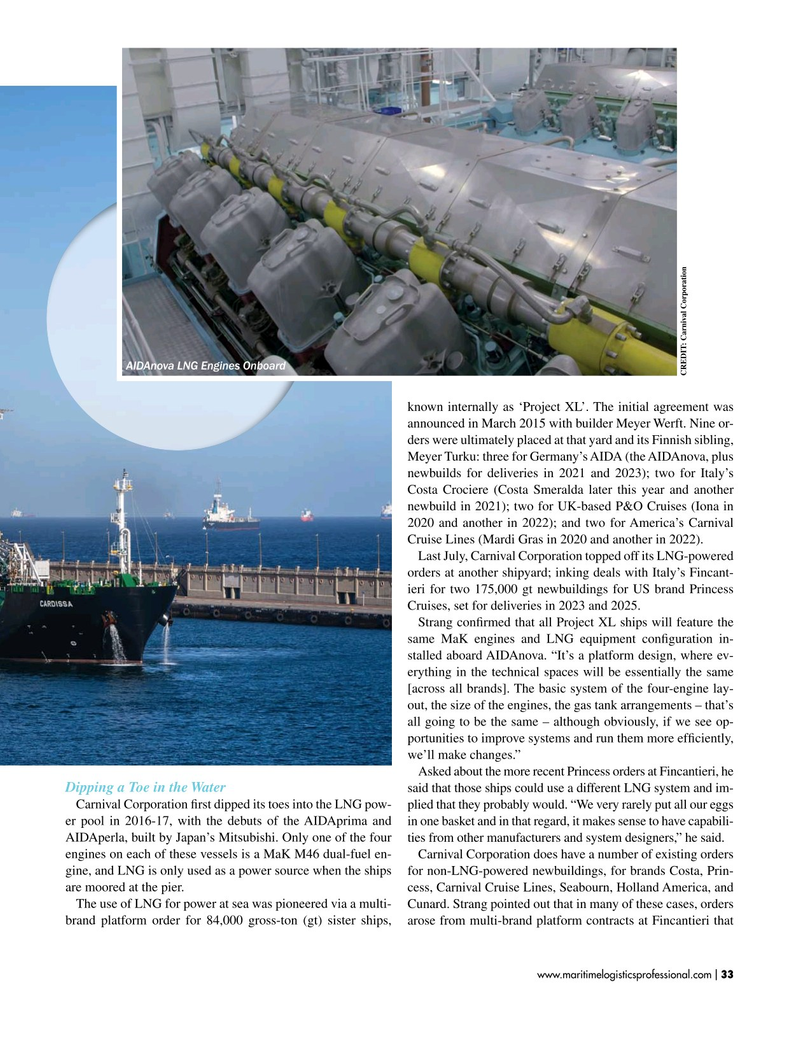 CREDIT: Carnival Corporation known internally as ‘Project XL’. The initial agreement was announced in March 2015 with builder Meyer Werft. Nine or- ders were ultimately placed at that yard and its Finnish sibling,

Meyer Turku: three for Germany’s AIDA (the AIDAnova, plus newbuilds for deliveries in 2021 and 2023); two for Italy’s

Costa Crociere (Costa Smeralda later this year and another newbuild in 2021); two for UK-based P&O Cruises (Iona in 2020 and another in 2022); and two for America’s Carnival

Last July, Carnival Corporation topped off its LNG-powered orders at another shipyard; inking deals with Italy’s Fincant- ieri for two 175,000 gt newbuildings for US brand Princess

Strang confrmed that all Project XL ships will feature the same MaK engines and LNG equipment confguration in- stalled aboard AIDAnova. “It’s a platform design, where ev- erything in the technical spaces will be essentially the same [across all brands]. The basic system of the four-engine lay- out, the size of the engines, the gas tank arrangements – that’s all going to be the same – although obviously, if we see op- portunities to improve systems and run them more effciently, we’ll make changes.”

Asked about the more recent Princess orders at Fincantieri, he

Carnival Corporation frst dipped its toes into the LNG pow- plied that they probably would. “We very rarely put all our eggs er pool in 2016-17, with the debuts of the AIDAprima and in one basket and in that regard, it makes sense to have capabili-

AIDAperla, built by Japan’s Mitsubishi. Only one of the four ties from other manufacturers and system designers,” he said. engines on each of these vessels is a MaK M46 dual-fuel en- Carnival Corporation does have a number of existing orders gine, and LNG is only used as a power source when the ships for non-LNG-powered newbuildings, for brands Costa, Prin- are moored at the pier. cess, Carnival Cruise Lines, Seabourn, Holland America, and

The use of LNG for power at sea was pioneered via a multi- Cunard. Strang pointed out that in many of these cases, orders brand platform order for 84,000 gross-ton (gt) sister ships, arose from multi-brand platform contracts at Fincantieri that www.maritimelogisticsprofessional.com 33