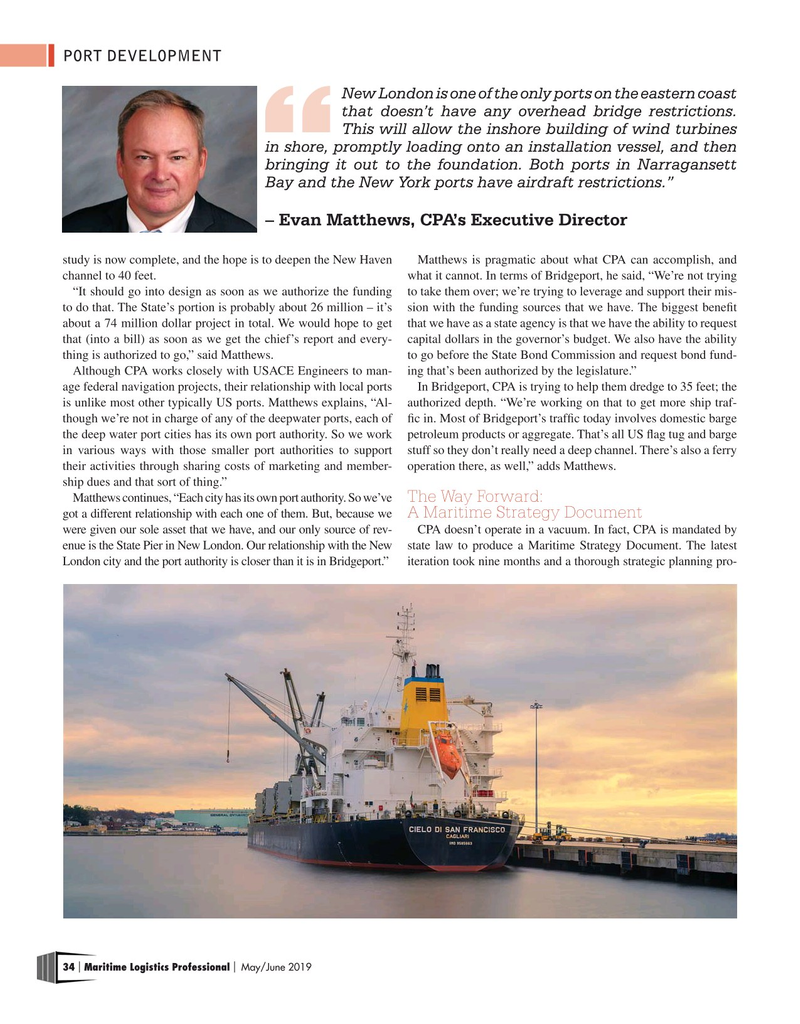 New London is one of the only ports on the eastern coast that doesn’t have any overhead bridge restrictions.

This will allow the inshore building of wind turbines in shore, promptly loading onto an installation vessel, and then bringing it out to the foundation. Both ports in Narragansett

Bay and the New York ports have airdraft restrictions.” – Evan Matthews, CPA’s Executive Director study is now complete, and the hope is to deepen the New Haven Matthews is pragmatic about what CPA can accomplish, and channel to 40 feet. what it cannot. In terms of Bridgeport, he said, “We’re not trying “It should go into design as soon as we authorize the funding to take them over; we’re trying to leverage and support their mis- to do that. The State’s portion is probably about 26 million – it’s sion with the funding sources that we have. The biggest bene?t about a 74 million dollar project in total. We would hope to get that we have as a state agency is that we have the ability to request that (into a bill) as soon as we get the chief’s report and every- capital dollars in the governor’s budget. We also have the ability thing is authorized to go,” said Matthews. to go before the State Bond Commission and request bond fund-

Although CPA works closely with USACE Engineers to man- ing that’s been authorized by the legislature.” age federal navigation projects, their relationship with local ports In Bridgeport, CPA is trying to help them dredge to 35 feet; the is unlike most other typically US ports. Matthews explains, “Al- authorized depth. “We’re working on that to get more ship traf- though we’re not in charge of any of the deepwater ports, each of ?c in. Most of Bridgeport’s traf?c today involves domestic barge the deep water port cities has its own port authority. So we work petroleum products or aggregate. That’s all US ?ag tug and barge in various ways with those smaller port authorities to support stuff so they don’t really need a deep channel. There’s also a ferry their activities through sharing costs of marketing and member- operation there, as well,” adds Matthews. ship dues and that sort of thing.”

Matthews continues, “Each city has its own port authority. So we’ve

The Way Forward: got a different relationship with each one of them. But, because we

London city and the port authority is closer than it is in Bridgeport.” iteration took nine months and a thorough strategic planning pro- 34 Maritime Logistics Professional May/June 2019 | |