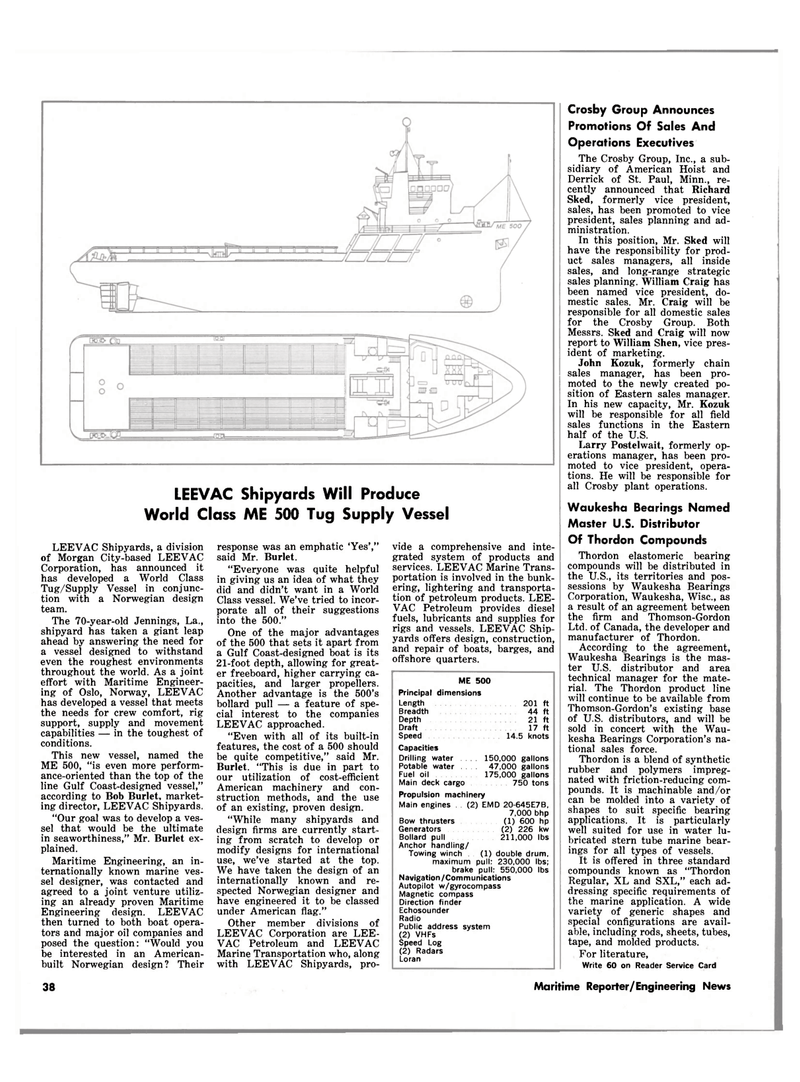 Corporation, has announced it has developed a World Class

Tug/Supply Vessel in conjunc- tion with a Norwegian design team.

The 70-year-old Jennings, La., shipyard has taken a giant leap ahead by answering the need for a vessel designed to withstand even the roughest environments throughout the world. As a joint effort with Maritime Engineer- ing of Oslo, Norway, LEEVAC has developed a vessel that meets the needs for crew comfort, rig support, supply and movement capabilities — in the toughest of conditions.

This new vessel, named the

ME 500, "is even more perform- ance-oriented than the top of the line Gulf Coast-designed vessel," according to Bob Burlet, market- ing director, LEEVAC Shipyards. "Our goal was to develop a ves- sel that would be the ultimate in seaworthiness," Mr. Burlet ex- plained.

Engineering design. LEEVAC then turned to both boat opera- tors and major oil companies and posed the question: "Would you be interested in an American- built Norwegian design? Their response was an emphatic 'Yes'," said Mr. Burlet. "Everyone was quite helpful in giving us an idea of what they did and didn't want in a World

Class vessel. We've tried to incor- porate all of their suggestions into the 500."

One of the major advantages of the 500 that sets it apart from a Gulf Coast-designed boat is its 21-foot depth, allowing for great- er freeboard, higher carrying ca- pacities, and larger propellers.

LEEVAC approached. "Even with all of its built-in features, the cost of a 500 should be quite competitive," said Mr.

Burlet. "This is due in part to our utilization of cost-efficient

American machinery and con- struction methods, and the use of an existing, proven design. "While many shipyards and design firms are currently start- ing from scratch to develop or modify designs for international use, we've started at the top.

We have taken the design of an internationally known and re- spected Norwegian designer and have engineered it to be classed under American flag."

Other member divisions of

Marine Transportation who, along with LEEVAC Shipyards, pro- vide a comprehensive and inte- grated system of products and services. LEEVAC Marine Trans- portation is involved in the bunk- ering, lightering and transporta- tion of petroleum products. LEE-

Promotions Of Sales And

The Crosby Group, Inc., a sub- sidiary of American Hoist and

Derrick of St. Paul, Minn., re- cently announced that Richard

In this position, Mr. Sked will have the responsibility for prod- uct sales managers, all inside sales, and long-range strategic sales planning. William Craig has been named vice president, do- mestic sales. Mr. Craig will be responsible for all domestic sales for the Crosby Group. Both

In his new capacity, Mr. Kozuk will be responsible for all field sales functions in the Eastern half of the U.S.

Larry Postelwait, formerly op- erations manager, has been pro- moted to vice president, opera- tions. He will be responsible for all Crosby plant operations.

Thordon elastomeric bearing compounds will be distributed in the U.S., its territories and pos- sessions by Waukesha Bearings

Corporation, Waukesha, Wise., as a result of an agreement between the firm and Thomson-Gordon

Ltd. of Canada, the developer and manufacturer of Thordon.

According to the agreement,

Waukesha Bearings is the mas- ter U.S. distributor and area technical manager for the mate- rial. The Thordon product line will continue to be available from

Thomson-Gordon's existing base of U.S. distributors, and will be sold in concert with the Wau- kesha Bearings Corporation's na- tional sales force.

Thordon is a blend of synthetic rubber and polymers impreg- nated with friction-reducing com- pounds. It is machinable and/or can be molded into a variety of shapes to suit specific bearing applications. It is particularly well suited for use in water lu- bricated stern tube marine bear- ings for all types of vessels.

It is offered in three standard compounds known as "Thordon

Regular, XL and SXL," each ad- dressing specific requirements of the marine application. A wide variety of generic shapes and special configurations are avail- able, including rods, sheets, tubes, tape, and molded products.