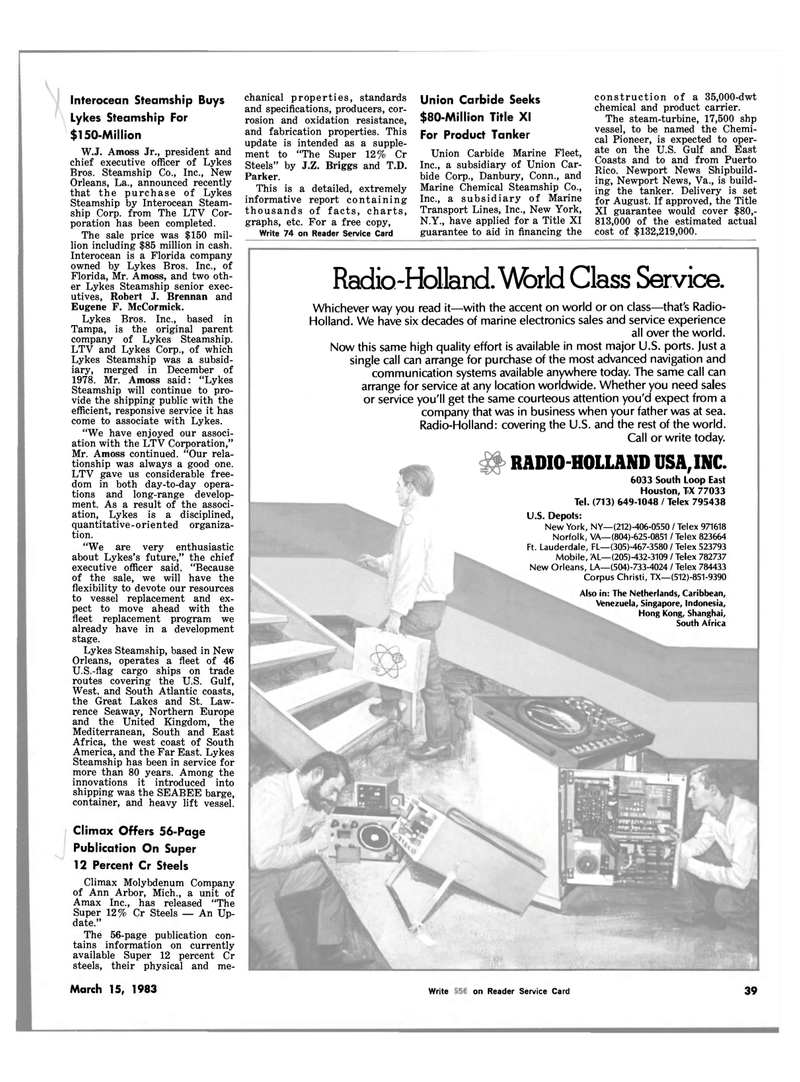 Orleans, La., announced recently that the purchase of Lykes

Steamship by Interocean Steam- ship Corp. from The LTV Cor- poration has been completed.

Interocean is a Florida company owned by Lykes Bros. Inc., of

Lykes Bros. Inc., based in

Tampa, is the original parent company of Lykes Steamship.

LTV and Lykes Corp., of which

Steamship will continue to pro- vide the shipping public with the efficient, responsive service it has come to associate with Lykes. "We have enjoyed our associ- ation with the LTV Corporation,"

Mr. Amoss continued. "Our rela- tionship was always a good one.

LTV gave us considerable free- dom in both day-to-day opera- tions and long-range develop- ment. As a result of the associ- ation, Lykes is a disciplined, quantitative-oriented organiza- tion. "We are very enthusiastic about Lykes's future," the chief executive officer said. "Because of the sale, we will have the flexibility to devote our resources to vessel replacement and ex- pect to move ahead with the fleet replacement program we already have in a development stage.

Lykes Steamship, based in New

Orleans, operates a fleet of 46

West, and South Atlantic coasts, the Great Lakes and St. Law- rence Seaway, Northern Europe and the United Kingdom, the

Africa, the west coast of South

America, and the Far East. Lykes

Steamship has been in service for more than 80 years. Among the innovations it introduced into shipping was the SEABEE barge, container, and heavy lift vessel.

Climax Molybdenum Company of Ann Arbor, Mich., a unit of

Amax Inc., has released "The

The 56-page publication con- tains information on currently available Super 12 percent Cr steels, their physical and me- chanical properties, standards and specifications, producers, cor- rosion and oxidation resistance, and fabrication properties. This update is intended as a supple- ment to "The Super 12% Cr

This is a detailed, extremely informative report containing thousands of facts, charts, graphs, etc. For a free copy,

Inc., a subsidiary of Marine

N.Y., have applied for a Title XI guarantee to aid in financing the construction of a 35,000-dwt chemical and product carrier.

The steam-turbine, 17,500 shp vessel, to be named the Chemi- cal Pioneer, is expected to oper- ate on the U.S. Gulf and East

Coasts and to and from Puerto

Holland. We have six decades of marine electronics sales and service experience all over the world.

Now this same high quality effort is available in most major U.S. ports. Just a single call can arrange for purchase of the most advanced navigation and communication systems available anywhere today. The same call can arrange for service at any location worldwide. Whether you need sales or service you'll get the same courteous attention you'd expect from a company that was in business when your father was at sea.

Radio-Holland: covering the U.S. and the rest of the world.

Also in: The Netherlands, Caribbean,