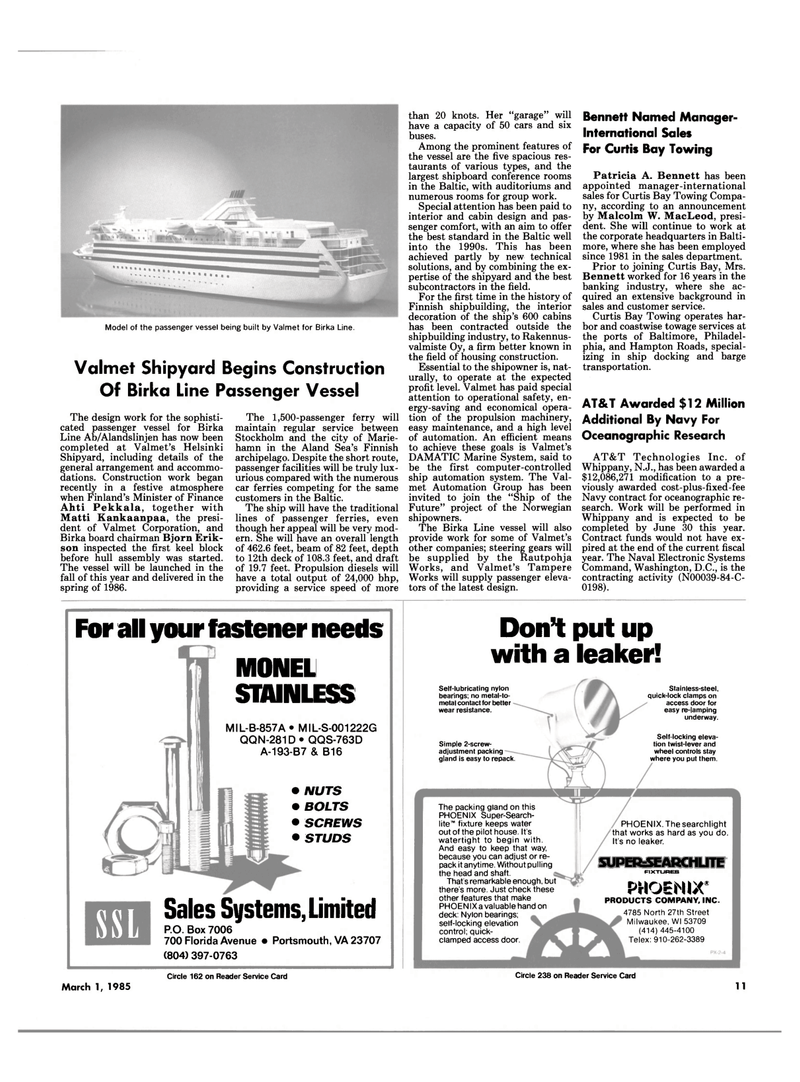 Model of the passenger vessel being built by Valmet for Birka Line.

The design work for the sophisti- cated passenger vessel for Birka

Line Ab/Alandslinjen has now been completed at Valmet's Helsinki

Shipyard, including details of the general arrangement and accommo- dations. Construction work began recently in a festive atmosphere when Finland's Minister of Finance

Ahti Pekkala, together with

Matti Kankaanpaa, the presi- dent of Valmet Corporation, and

The vessel will be launched in the fall of this year and delivered in the spring of 1986.

The 1,500-passenger ferry will maintain regular service between

Stockholm and the city of Marie- hamn in the Aland Sea's Finnish archipelago. Despite the short route, passenger facilities will be truly lux- urious compared with the numerous car ferries competing for the same customers in the Baltic.

The ship will have the traditional lines of passenger ferries, even though her appeal will be very mod- ern. She will have an overall length of 462.6 feet, beam of 82 feet, depth to 12th deck of 108.3 feet, and draft of 19.7 feet. Propulsion diesels will have a total output of 24,000 bhp, providing a service speed of more than 20 knots. Her "garage" will have a capacity of 50 cars and six buses.

Among the prominent features of the vessel are the five spacious res- taurants of various types, and the largest shipboard conference rooms in the Baltic, with auditoriums and numerous rooms for group work.

Special attention has been paid to interior and cabin design and pas- senger comfort, with an aim to offer the best standard in the Baltic well into the 1990s. This has been achieved partly by new technical solutions, and by combining the ex- pertise of the shipyard and the best subcontractors in the field.

For the first time in the history of

Finnish shipbuilding, the interior decoration of the ship's 600 cabins has been contracted outside the shipbuilding industry, to Rakennus- valmiste Oy, a firm better known in the field of housing construction.

Essential to the shipowner is, nat- urally, to operate at the expected profit level. Valmet has paid special attention to operational safety, en- ergy-saving and economical opera- tion of the propulsion machinery, easy maintenance, and a high level of automation. An efficient means to achieve these goals is Valmet's

DAMATIC Marine System, said to be the first computer-controlled ship automation system. The Val- met Automation Group has been invited to join the "Ship of the

Future" project of the Norwegian shipowners.

The Birka Line vessel will also provide work for some of Valmet's other companies; steering gears will be supplied by the Rautpohja

Works will supply passenger eleva- tors of the latest design.

Patricia A. Bennett has been appointed manager-international sales for Curtis Bay Towing Compa- ny, according to an announcement by Malcolm W. MacLeod, presi- dent. She will continue to work at the corporate headquarters in Balti- more, where she has been employed since 1981 in the sales department.

Prior to joining Curtis Bay, Mrs.

Bennett worked for 16 years in the banking industry, where she ac- quired an extensive background in sales and customer service.

Additional By Navy For

Navy contract for oceanographic re- search. Work will be performed in

Whippany and is expected to be completed by June 30 this year.

Contract funds would not have ex- pired at the end of the current fiscal year. The Naval Electronic Systems

For all your fastener needs

Dont put up with a leaker!

The packing gland on this

PHOENIX Super-Search- lite™ fixture keeps water out of the pilot house. It's watertight to begin with.

And easy to keep that way, because you can adjust or re- pack it anytime. Without pulling the head and shaft.

That's remarkable enough, but there's more. Just check these other features that make

Self-locking eleva- tion twist-lever and wheel controls stay where you put them.

PHOENIX. The searchlight that works as hard as you do.