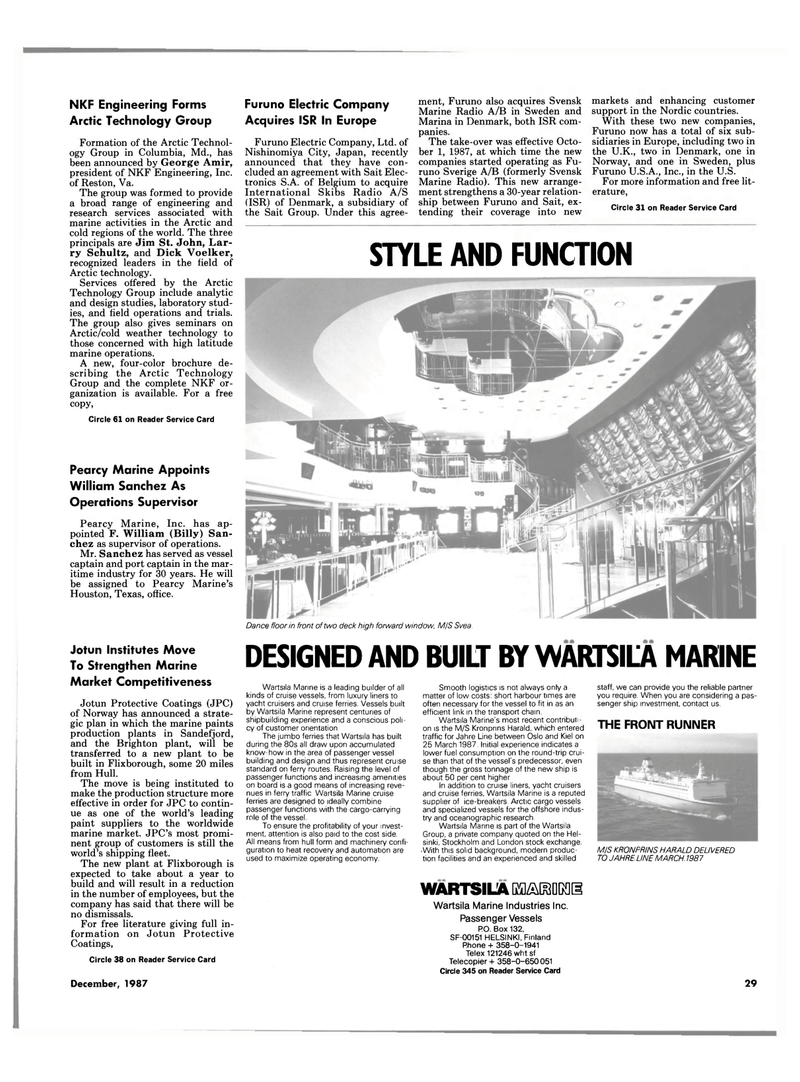 Formation of the Arctic Technol- ogy Group in Columbia, Md., has been announced by George Amir, president of NKF Engineering, Inc. of Reston, Va.

The group was formed to provide a broad range of engineering and research services associated with marine activities in the Arctic and cold regions of the world. The three principals are Jim St. John, Lar- ry Schultz, and Dick Voelker, recognized leaders in the field of

Services offered by the Arctic

The group also gives seminars on

Group and the complete NKF or- ganization is available. For a free copy,

Mr. Sanchez has served as vessel captain and port captain in the mar- itime industry for 30 years. He will be assigned to Pearcy Marine's

Jotun Protective Coatings (JPC) of Norway has announced a strate- gic plan in which the marine paints production plants in Sandefjord, and the Brighton plant, will be transferred to a new plant to be built in Flixborough, some 20 miles from Hull.

The move is being instituted to make the production structure more effective in order for JPC to contin- ue as one of the world's leading paint suppliers to the worldwide marine market. JPC's most promi- nent group of customers is still the world's shipping fleet.

The new plant at Flixborough is expected to take about a year to build and will result in a reduction in the number of employees, but the company has said that there will be no dismissals.

For free literature giving full in- formation on Jotun Protective

Nishinomiya City, Japan, recently announced that they have con- cluded an agreement with Sait Elec- tronics S.A. of Belgium to acquire

Marine Radio A/B in Sweden and

Marine Radio). This new arrange- ment strengthens a 30-year relation- ship between Furuno and Sait, ex- tending their coverage into new markets and enhancing customer support in the Nordic countries.

With these two new companies,

Furuno now has a total of six sub- sidiaries in Europe, including two in the U.K., two in Denmark, one in

Norway, and one in Sweden, plus

DESIGNED AND BUILT BY WARTSILA MARINE

Wartsila Marine is a leading builder of all kinds of cruise vessels, from luxury liners to yacht cruisers and cruise ferries Vessels built by Wartsila Marine represent centuries of shipbuilding experience and a conscious poli- cy of customer orientation

The jumbo ferries that Wartsila has built during the 80s all draw upon accumulated know-how in the area of passenger vessel building and design and thus represent cruise standard on ferry routes. Raising the level of passenger functions and increasing amenities on board is a good means of increasing reve- nues in ferry traffic. Wartsila Marine cruise ferries are designed to ideally combine passenger functions with the cargo-carrying role of the vessel.

To ensure the profitability of your invest- ment, attention is also paid to the cost side.

All means from hull form and machinery confi- guration to heat recovery and automation are used to maximize operating economy.

Smooth logistics is not always only a matter of low costs: short harbour times are often necessary for the vessel to fit in as an efficient link in the transport chain.

Wartsila Marine's most recent contributi- on is the M/S Kronprins Harald, which entered traffic for Jahre Line between Oslo and Kiel on 25 March 1987 Initial experience indicates a lower fuel consumption on the round-trip crui- se than that of the vessel's predecessor, even though the gross tonnage of the new ship is about 50 per cent higher

In addition to cruise liners, yacht cruisers and cruise ferries, Wartsila Marine is a reputed supplier of ice-breakers Arctic cargo vessels and specialized vessels for the offshore indus- try and oceanographic research.

Wartsila Marine is part of the Wartsila

Group, a private company quoted on the Hel- sinki, Stockholm and London stock exchange. •With this solid background, modern produc- tion facilities and an experienced and skilled staff, we can provide you the reliable partner you require. When you are considering a pas- senger ship investment, contact us.