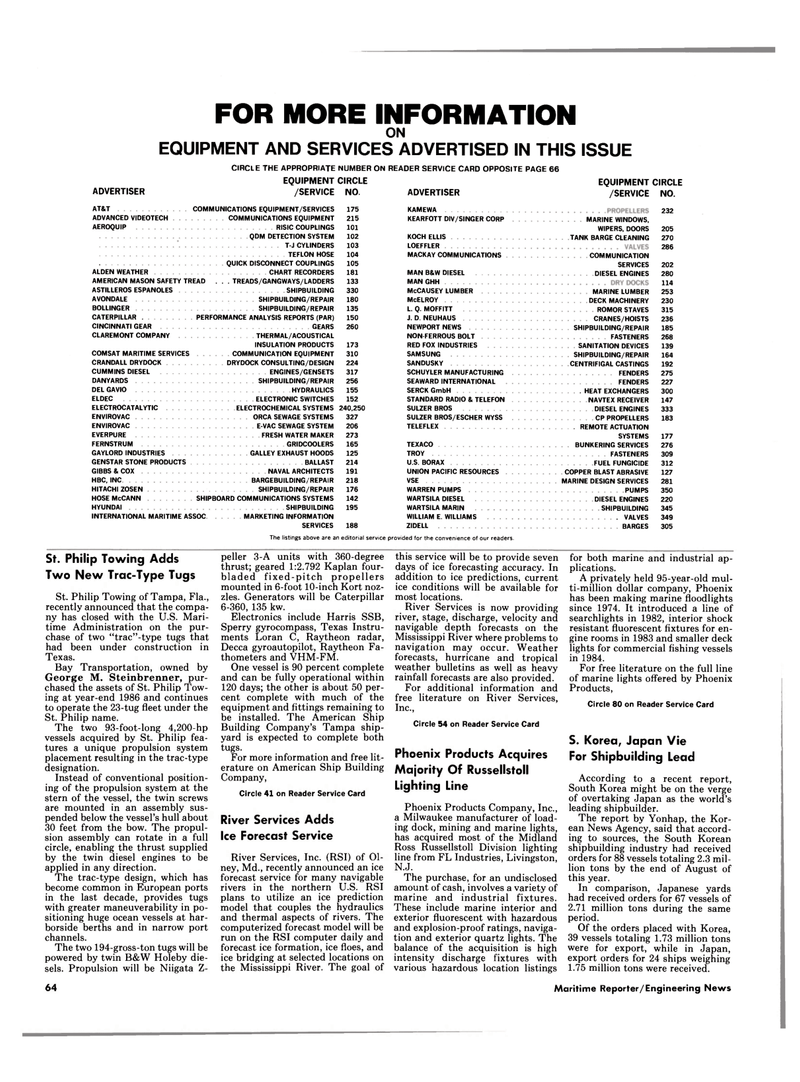 EQUIPMENT AND SERVICES ADVERTISED IN THIS ISSUE

CIRCLE THE APPROPRIATE NUMBER ON READER SERVICE CARD OPPOSITE PAGE 66

The listings above are an editorial service provided for the convenience of our readers.

St. Philip Towing of Tampa, Fla., recently announced that the compa- ny has closed with the U.S. Mari- time Administration on the pur- chase of two "trac"-type tugs that had been under construction in

George M. Steinbrenner, pur- chased the assets of St. Philip Tow- ing at year-end 1986 and continues to operate the 23-tug fleet under the

Instead of conventional position- ing of the propulsion system at the stern of the vessel, the twin screws are mounted in an assembly sus- pended below the vessel's hull about 30 feet from the bow. The propul- sion assembly can rotate in a full circle, enabling the thrust supplied by the twin diesel engines to be applied in any direction.

The trac-type design, which has become common in European ports in the last decade, provides tugs with greater maneuverability in po- sitioning huge ocean vessels at har- borside berths and in narrow port channels.

One vessel is 90 percent complete and can be fully operational within 120 days; the other is about 50 per- cent complete with much of the equipment and fittings remaining to be installed. The American Ship

River Services, Inc. (RSI) of 01- ney, Md., recently announced an ice forecast service for many navigable rivers in the northern U.S. RSI plans to utilize an ice prediction model that couples the hydraulics and thermal aspects of rivers. The computerized forecast model will be run on the RSI computer daily and forecast ice formation, ice floes, and ice bridging at selected locations on the Mississippi River. The goal of this service will be to provide seven days of ice forecasting accuracy. In addition to ice predictions, current ice conditions will be available for most locations.

For additional information and free literature on River Services,

Phoenix Products Company, Inc., a Milwaukee manufacturer of load- ing dock, mining and marine lights, has acquired most of the Midland

The purchase, for an undisclosed amount of cash, involves a variety of marine and industrial fixtures.

These include marine interior and exterior fluorescent with hazardous and explosion-proof ratings, naviga- tion and exterior quartz lights. The balance of the acquisition is high intensity discharge fixtures with various hazardous location listings for both marine and industrial ap- plications.

A privately held 95-year-old mul- ti-million dollar company, Phoenix has been making marine floodlights since 1974. It introduced a line of searchlights in 1982, interior shock resistant fluorescent fixtures for en- gine rooms in 1983 and smaller deck lights for commercial fishing vessels in 1984.

According to a recent report,

South Korea might be on the verge of overtaking Japan as the world's leading shipbuilder.

The report by Yonhap, the Kor- ean News Agency, said that accord- ing to sources, the South Korean shipbuilding industry had received orders for 88 vessels totaling 2.3 mil- lion tons by the end of August of this year.

In comparison, Japanese yards had received orders for 67 vessels of 2.71 million tons during the same period.

Of the orders placed with Korea, 39 vessels totaling 1.73 million tons were for export, while in Japan, export orders for 24 ships weighing 1.75 million tons were received. 64 Maritime Reporter/Engineering News