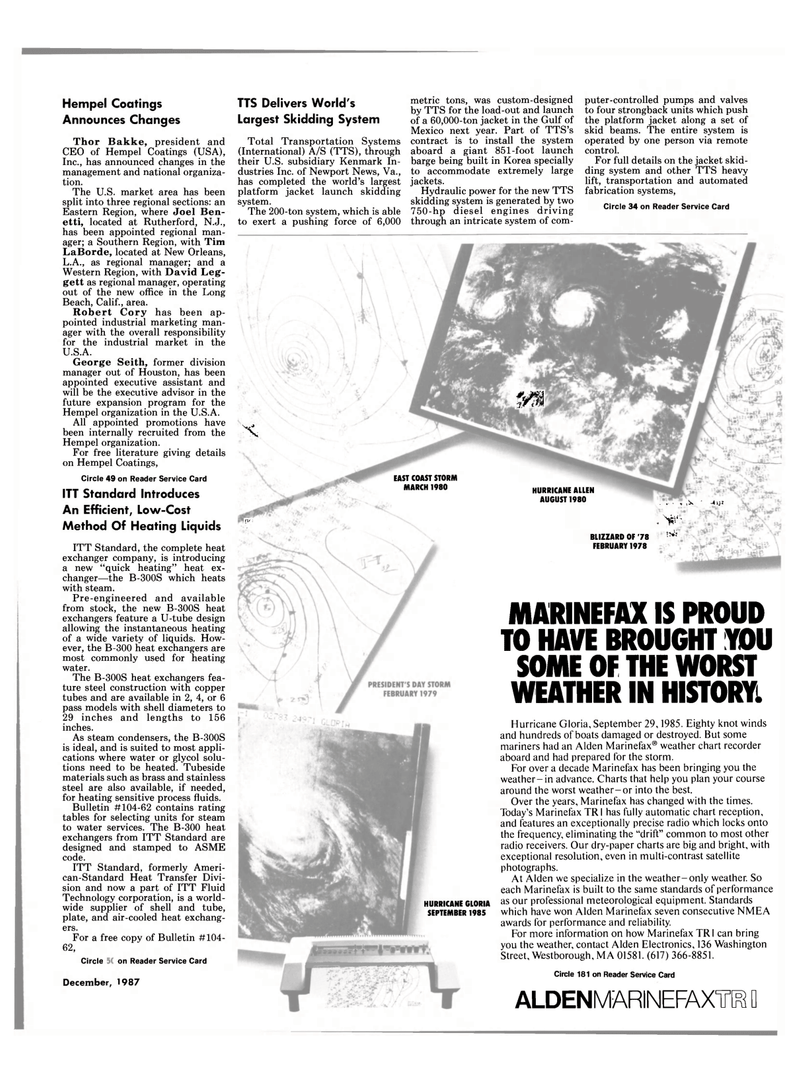 Inc., has announced changes in the management and national organiza- tion.

The U.S. market area has been split into three regional sections: an

L.A., as regional manager; and a

Western Region, with David Leg- gett as regional manager, operating out of the new office in the Long

George Seith, former division manager out of Houston, has been appointed executive assistant and will be the executive advisor in the future expansion program for the

Hempel organization in the U.S.A.

All appointed promotions have been internally recruited from the

Pre-engineered and available from stock, the new B-300S heat exchangers feature a U-tube design allowing the instantaneous heating of a wide variety of liquids. How- ever, the B-300 heat exchangers are most commonly used for heating water.

The B-300S heat exchangers fea- ture steel construction with copper tubes and are available in 2, 4, or 6 pass models with shell diameters to 29 inches and lengths to 156 inches.

As steam condensers, the B-300S is ideal, and is suited to most appli- cations where water or glycol solu- tions need to be heated. Tubeside materials such as brass and stainless steel are also available, if needed, for heating sensitive process fluids.

Bulletin #104-62 contains rating tables for selecting units for steam to water services. The B-300 heat exchangers from ITT Standard are designed and stamped to ASME code.

The 200-ton system, which is able to exert a pushing force of 6,000 metric tons, was custom-designed by TTS for the load-out and launch of a 60,000-ton jacket in the Gulf of

Mexico next year. Part of TTS's contract is to install the system aboard a giant 851-foot launch barge being built in Korea specially to accommodate extremely large jackets.

Hydraulic power for the new TTS skidding system is generated by two 750-hp diesel engines driving through an intricate system of com- puter-controlled pumps and valves to four strongback units which push the platform jacket along a set of skid beams. The entire system is operated by one person via remote control.

For full details on the jacket skid- ding system and other TTS heavy lift, transportation and automated fabrication systems,

MARINEFAX IS PROUD TO HAVE BROUGHT YOU

SOME OF THE WORST WEATHER IN HISTORY.

Hurricane Gloria, September 29,1985. Eighty knot winds and hundreds of boats damaged or destroyed. But some mariners had an Alden Marinefax® weather chart recorder aboard and had prepared for the storm.

For over a decade Marinefax has been bringing you the weather-in advance. Charts that help you plan your course around the worst weather-or into the best.

Over the years, Marinefax has changed with the times.

Today's Marinefax TRI has fully automatic chart reception, and features an exceptionally precise radio which locks onto the frequency, eliminating the "drift" common to most other radio receivers. Our dry-paper charts are big and bright, with exceptional resolution, even in multi-contrast satellite photographs.

At Alden we specialize in the weather-only weather. So each Marinefax is built to the same standards of performance as our professional meteorological equipment. Standards which have won Alden Marinefax seven consecutive NMEA awards for performance and reliability.

For more information on how Marinefax TR I can bring you the weather, contact Alden Electronics, 136 Washington